Accessibility links
An Incendiary, Influential Funk Genius Gets Her Due Betty Davis could be sultry or earthy, strident or nasty. She seized heavy funk backbeats, and around them built commanding, sometimes taunting vocal entreaties that were way ahead of their time: Her work presages the stances and ideas of strong hip-hop women from Erykah Badu to Foxy Brown.

An Incendiary, Influential Funk Genius Gets Her Due

An Incendiary, Influential Funk Genius Gets Her Due 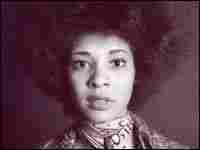 Born Betty Mabry, Davis was known for her powerful voice, as well as a forthright no-bull attitude. hide caption

Betty Davis was a defiant, free-spirited rebel at a moment when America was just beginning to grapple with feminism. So was timing the reason for her obscurity? Or was she simply too "strong" a personality? 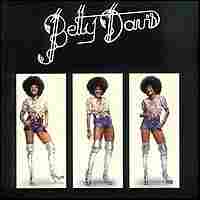 Game Is My Middle Name

Steppin in Her I. Miller Shoes

It's easy to see how a young R&B singer could get lost among the tall trees of the early '70s. This was, after all, the era of the utopian Sly & The Family Stone, as well as James Brown, the endlessly seductive Al Green, the electrically charged Ike and Tina Turner, and the fast-rising cosmic funk of Parliament and Funkadelic.

Still, the continued obscurity of the amazing Betty Davis, the fiery singer and songwriter who was once described by Carlos Santana as a fearless "Black Panther" figure, remains a puzzle. Born Betty Mabry, she was known for her powerful voice, as well as a forthright no-bull attitude that grew increasingly defiant over the course of a three-album career. (Religious groups successfully protested at radio stations against several of her more explicit songs.) She could be sultry, as on "Anti Love Song" (audio), and then get earthy, strident, nasty. She seized heavy funk backbeats, and around them built commanding, sometimes taunting vocal entreaties that were way ahead of their time: "Game Is My Middle Name" (audio) presages the stances and ideas of strong hip-hop women from Erykah Badu to Foxy Brown, in waves of radiant, impossibly tuneful ad-libs.

The bold musical vision and independent-woman tone should have been enough to bring Davis to a large audience. Plus, she was well-connected: The once and future model counted Jimi Hendrix and members of Sly & The Family Stone among her friends, and less than a year after meeting jazz trumpeter Miles Davis in 1967, she became his second wife. In his autobiography, Davis credits the former Betty Mabry (whose photograph adorns the cover of his Filles de Kilimanjaro and is immortalized on that album's "Mademoiselle Mabry") with helping to enlighten him about both psychedelic rock and the music of Hendrix and Sly Stone. Though the marriage didn't last a year — Davis once described her as "too wild" for him — her influence proved vital to the direction of modern music: In short order, Davis moved into the exploratory realms of In a Silent Way and Bitches Brew, classics of what came to be called jazz fusion.

Davis began her own singing career not long after the divorce. She enlisted a bunch of famous friends to help out with her self-titled debut: Drummer Gregg Errico from Sly Stone's band anchors the rhythm section and handles production, Sly bassist Larry Graham pumps out the funk, and a bunch of people who became famous later on — the Pointer Sisters, Journey guitarist Neil Schon, the Tower of Power horns — contribute to a series of incredibly loose tracks. They walked away from the sessions knowing what only a tragically small group of admirers would discover: that Betty Davis had cooked up a blend of incendiary, rhythmically progressive funk that was like nothing heard before. Or since.