Accessibility links
Gonzales Admits to Errors in Firing U.S. Attorneys Speaking of the dismissal of eight federal prosecutors — and the White House's role in the firings — Attorney General Alberto Gonzales says, "I acknowledge that mistakes were made here; I accept that responsibility." A top Justice Department adviser has resigned over his involvement in the dismissals. 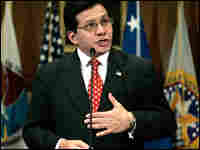 Attorney General Alberto Gonzales, addressing the growing furor over the Justice Department's dismissal of eight federal prosecutors, acknowledged Tuesday that "mistakes were made" in the way his agency handled and disclosed the dismissals.

"I accept that responsibility," Gonzales said during a press conference. "And my pledge to the American people is to find out what went wrong here, to assess accountability, and to make improvements so the mistakes that occurred in this instance do not occur in the future."

Gonzales also confirmed that Kyle Sampson, one of his top aides at the Justice Department, had resigned Monday. Sampson's departure comes amid charges that he failed to fully brief other department officials on the history of the firings before they testified on the matter before Congress.

Congressional leaders promise they're not done digging yet.

"The latest revelations prove beyond any reasonable doubt that there has been unprecedented breach of trust, abuse of power and misuse of the Justice Department," said Sen. Charles Schumer (D-NY). "And that is very serious and very important."

The documents indicate that the dismissal process began two years earlier, when Miers suggested that all 93 U.S. attorneys be replaced. Sampson was involved in bringing that number down to eight.

On, Jan. 9, 2006, Sampson wrote a note to Miers that read, "I recommend that the Department of Justice and the office of the counsel to the president work together to seek the replacement of a limited number of U.S. attorneys."

One prosecutor was fired last summer; seven others were fired on a single day in December. Although the Bush administration maintains that most of the firings were performance-related, some of the former prosecutors have testified before Congress that they believe they were forced out for political reasons.

With Congress now examining the White House's role in the dismissals, Gonzales canceled his travel plans to do damage control. Schumer has called for the attorney general to resign; Sen. Diane Feinstein (D-CA) and Sen. John Ensign (R-NV) have expressed anger over the false information that the Justice Department has given about the firings.

Many people are asking whether President Bush was involved. White House Spokesman Tony Snow told reporters that Mr. Bush had passed along complaints about U.S. attorneys' failure to pursue cases of voter fraud, but that he never complained about specific prosecutors.

Senate Judiciary Committee Chairman Patrick Leahy (D-VT) accused the administration of acting as though it still has a rubber-stamp Congress.

"They are discovering that those days are gone," Leahy said.

When the scandal first broke, Democrats accused the Justice Department of trying to use a provision in the Patriot Act to appoint new U.S. attorneys without congressional approval. On Tuesday, Attorney General Gonzales said that his agency never planned to go around Congress. But the e-mails suggest otherwise.

In December 2006, Sampson wrote of the new authority, "If we don't ever exercise it, then what's the point of having it?"

Washington University Law professor Sam Buell worked as a federal prosecutor for 10 years and prosecuted the Enron case. He says the administration has the right to fire U.S. attorneys at any time for any reason, but this scandal risks doing long-term damage to prosecutors' reputation for independence.

"They need to be able to say to judges, to juries, to the public, 'We follow the evidence where it leads us. We apply the law. Our decisions are not political,'" Buell said. "And that makes them more effective. So while the administration might gain something politically from doing this, it loses something in terms of its ability to accomplish the Department of Justice's mission."