Accessibility links
African Guitarists Have Arrived at a New Style It's a truism that the drum is the heart and soul of African music. But not so fast: Over the past century, guitarists have redefined the sound of the continent. Two new releases, by Zimbabwean guitarist Louis Mhlanga and a Toronto-based group called the African Guitar Summit, prove that.

Listen
African Guitarists Have Arrived at a New Style 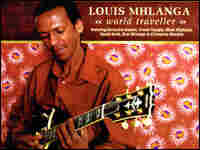 Zimbabwean guitarist Louis Mhlanga works with a band that is based in South Africa. hide caption

It's a truism that drums are the heart and soul of African music. But not so fast: Over the past century, guitarists have redefined the sound of the continent. Two new releases, by Zimbabwean guitarist Louis Mhlanga and a Toronto-based group called the African Guitar Summit, prove that.

It's time we start thinking of African guitar music as a genre unto itself.

If you didn't know Africa is a hotbed of six-string wizardry, don't feel bad. Until recently, world-class pickers in places like Kinshasa, Congo, and Bamako, Mali, not to mention rural townships in South Africa or beach towns in Madagascar, also knew little about one another.

Africans have long been divided by history and geography. But these days the guitarists of Africa are meeting, and in some unusual places. A few years ago, six of them came together in a studio at the Canadian Broadcasting Corporation.

The musicians became the African Guitar Summit; their second, self-titled CD is a honey pot of picking and riffing that's as African as any ancestral drum rhythm. One track, "Wengo Yango," features three guitarists: Donne Roberts and Madagascar Slim, both from Madagascar, Pa Jo from Ghana, and on bass, Mighty Popo from Uganda.

But oddly enough, the style of music they're playing comes from somewhere else entirely: the Congo. And that says a lot about the new dialogue going on among African guitarists.

The guitar first came to African port cities in the hands of Portuguese sailors centuries ago. But it wasn't until the 20th century that guitar bands became the norm in African cities. The Congolese sound, which started as an imitation of popular Cuban records, eventually trumped all competitors, crashing through language and culture barriers with dance drive and melodious guitar arranging.

The African Guitar Summit go back further still when they hit the Highlife sound, which swept through West Africa starting in the 1930s, as on "Me Wo Bi."

It took the vantage point of a Canadian city for these six African axemen to realize how much they had in common.

Growing up in Zimbabwe, guitarist Louis Mhlanga was not exposed to such a broad range of African styles. But in the early 1990s, he moved on to the more cosmopolitan South African jazz scene, and things started to click.

Mlhanga's new album, World Traveler, includes guest spots by West African pickers, and it's another example of African guitarist finding common ground. Listening to Mhlanga mixing it up with Barthelemy Atisso of Senegal's Orchestra Baobab on the track "Rumba All The Way," it's easy to hear the Latin strain that runs through so much African guitar music come to the fore.

It's great that African guitarists are finally connecting, but it would be a shame if the edgy originality of their local styles gets softened into a kind of pan-African mush.

The rhythms, modes and sound textures that make African guitar styles so satisfying are fragile. Too much tinkering and the magic can evaporate. The African Guitar Summit and Louis Mhlanga play at this exciting and dangerous edge. At their best they make a powerful case for the guitar as the signature instrument of modern Africa.