Accessibility links
Paul McCartney Gets Back to the Beatles After three decades of performing his post-Beatles pop, Paul McCartney releases a new live recording filled with Beatles tunes. In an interview with NPR's Renee Montagne, McCartney discusses the emotions of performing songs dedicated to George Harrison and John Lennon.

Listen
Paul McCartney Gets Back to the Beatles

Hear an extended version of Renee Montagne's interview with McCartney. 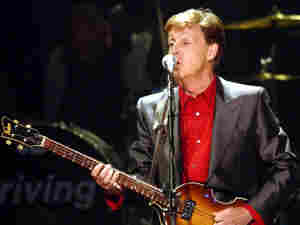 After three decades of performing his post-Beatles pop, Paul McCartney today releases a new live recording filled with Beatles tunes. The double-CD Back in the U.S. was recorded during his recent American tour. An accompanying DVD concert film is also being released.

In a Morning Edition interview with NPR's Renee Montagne, McCartney discusses the emotion of losing former band-mate George Harrison. Among the most poignant moments in the tour occured when McCartney stepped onstage strumming a ukulele and singing "Something," in honor of Harrison, who penned the tune.

"The minute I thought of George I thought of the ukulele because he was such a fan of the instrument," McCartney says. He fondly remembers that the two of them played ukuleles together at Harrison's home shortly before his death a year ago.

In another tribute, McCartney performs "Here Today," a song he wrote for John Lennon after his murder in 1980. "Because we're two guys, you don't always say intimate things. In fact, you hardly ever do. You work together... I had this idea it would be nice to say stuff that I really wanted to say to him but somehow put it in a song, so I did this thing called 'Here Today' and it was 'if you were here today, how would it be?...'"

Asked if it's difficult to sing these songs on tour, McCartney replies: "It's sometimes a little bit hard emotionally. You catch yourself and you hear what the lyric means and you suddenly identify with it and choke a bit. I know it's very emotional for the audience, but I like that.

"I'm no longer ashamed of being emotional. When I was 18, that was like the biggest crime a guy could commit. 'You cried?' Well, now it's like, 'Yeah and why not?' It's pretty sad stuff... losing a friend like John or losing (McCartney's first wife) Linda after all those years or George. So I'm comfortable (showing my emotions)."