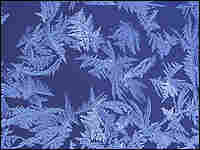 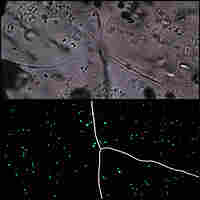 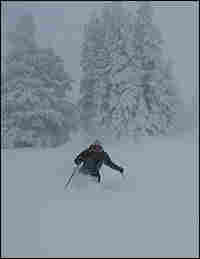 Brent Christner, lead author of the study, demonstrates the researchers' mode of transportation in the field. Courtesy of Brent Christner hide caption

Next time you're in a snowstorm, look up — and get a face-full of bacteria. It turns out there are bacteria up in the clouds, and some of them actually create ice crystals.

The inspiration for this research started in Montana. Brent Christner had a colleague there who was puzzled by some nasty plant bacteria that kept infecting his wheat crops. No matter what he did, he couldn't get rid of them. He suspected they might be airborne. So, Christner says, his friend cooked up a strange experiment involving a petri dish and an airplane.

He flew up in the airplane, "opened a window and held a petri plate outside," Christner explains. And in fact, bacteria grew.

The bacteria — which normally live on plants — were falling out of the sky.

That was over 20 years ago. Christner went on to become a microbiologist himself, currently at Louisiana State University, and also an expert in ice and snow. He knew that at certain temperatures, particles floating in the clouds cause water vapor to crystallize around them. And he remembered the flying bacteria.

"It really intrigued me ... the idea that if these bacteria were blown into the atmosphere and actually got into a cloud that they could induce precipitation," Christner says.

So Christner packed up his skis and went looking. He collected snow and ice and melted it down. Sure enough, he found the particles — or "nucleators," as they're known among ice experts — and was surprised to realize that the most active ones were bits of bacteria.

"In every sample that we've looked at we've found them," he says. He found these ice-bugs all over the place — France, Montana, the Yukon. And in some pretty unlikely places.

"We analyzed fresh snowfall from places like Antarctica where there aren't any plants around," Christner says. "They were still present."

Christner says these bacteria have a special protein that gives them their ice-making powers.

"It's a protein that mimics the lattice of an ice crystal," he explains. "So it enhances ice crystal formation."

In fact, there are several kinds of bacteria floating around in the sky that could be making snow or even rain, according to Steven Lindow, a plant scientist at University of California, Berkeley. He says scientists have suspected these bacteria may be using the atmosphere like an aerial freeway.

"They could leave plants, reach the upper atmosphere, (and) become ingrained in atmospheric particles that would fall later as rain or snow," Lindow says. "This would bring them back to earth perhaps even as raindrops onto a new plant where they could find a new home and start the cycle again."

He says the research, which appears in the latest issue of the journal Science, helps confirm that idea. Brent Christner adds that the findings pose an interesting possibility. For example, people might consider growing plants that harbor these bacteria in drought-prone places — in essence, he says, using a green thumb to make it rain.