Accessibility links
Leaving Work to Watch the Sunset Laurie Granieri believes in the 40-hour work week. She loves being a newspaper reporter, but after watching her father become consumed by his job, she decided to start leaving the office at five o'clock to go enjoy the rest of her life. 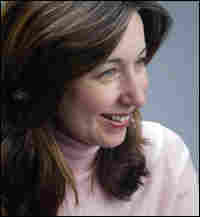 Laurie Granieri is a columnist and arts reporter for the Home News Tribune newspaper in East Brunswick, N.J. She grew up in a house full of books and her first writing job was for a weekly magazine covering soap operas. Granieri lives in Milltown, N.J. Photo Courtesy of Home News Tribune hide caption

Working only 40 hours a week? I just don't know many people who punch out at five o'clock anymore. It seems downright quaint, like pocket watches and shoe-shines.

I believe in leaving work at five o'clock.

In a nation that operates on a staunch Protestant work ethic, this belief could be considered radical. Working only 40 hours a week? I just don't know many people who punch out at five o'clock anymore. It seems downright quaint, like pocket watches and shoe-shines.

My father tried to teach me the importance of hard work, long hours and dedication to a career. But then there are the things he taught me unintentionally, like when he arrived home from work for the last time and crawled up the stairs.

My father, a self-employed sales trainer, was that sick, that tired. His body was wracked with liver cancer, and he suffered the effects of a diabetic ulcer. Still, he insisted on traveling to honor his commitment to give a seminar. He probably earned a lot of money that day, and he paid the price: He returned to the hospital soon after and was dead within three months, at age 58.

It's been 10 years since I saw my father come home that night, and since then, I've thought a lot about work. I've decided something: I will never crawl up the stairs. As much as I love my job as a newspaper reporter, I will never work myself into the ground, literally or figuratively.

The idea of leaving work at work didn't come easily to me. After all, I am my father's daughter. In college, I wasn't going to keg parties in a frat basement; I was the girl who lingered on the library steps each morning, waiting for the doors to open. I even dreamed about schoolwork.

My dad once told me he was unable to just gaze at a sunset; he had to be doing something as he looked at it — writing, reading, playing chess. You could say he was a success: He was a published author, an accomplished musician, fluent in German and American Sign Language. That's an impressive list, but here's the thing: I want to gaze at sunsets. I don't want to meet a deadline during them or be writing a column at the same time, or glance at them over the top of a book.

This raises the question: If I leave work at five o' clock to watch the sunset, what are the consequences? Do I risk not reaching the top of my profession? Maybe, because honestly, knocking off after eight hours probably won't earn me the corner office or the lucrative promotion.

But hey, leaving work at five o' clock means I eat dinner with my family. I get to hop on my bike and pedal through the streets of my hometown as the shadows lengthen and the traffic thins.

And I get to take in a lot of sunsets. That's got to be worth something.