Accessibility links
Radio Show Chronicled Blacks' Harsh Realities Seventy years ago this winter, a national radio audience began hearing about the harsh realities of a segregated South. The struggles of African-Americans were featured in sermons, lectures and songs on the show Wings Over Jordan, every Sunday for almost 10 years.

Dr. David Jones, president of Bennett College in North Carolina, spoke on 'Wings Over Jordan' in 1939, comparing the status of white women and black women in America. 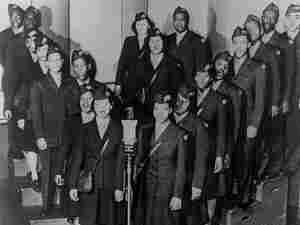 The Wings Over Jordan Choir, circa the 1940s. courtesy of the Western Reserve Historical Society hide caption

Historians have often cited the impact of television news coverage in exposing the harsh realities of a segregated South in the early 1960s. But 70 years ago this winter, a national radio audience began hearing about the struggles of African-Americans in sermons, lectures and songs on Wings Over Jordan, which aired in the 1930s and '40s.

Helen Turner Thompson says she vividly remembers Sunday mornings in Cleveland, when most every radio in her neighborhood was tuned to 1450 AM. A thousand miles away in Central Florida, the program was required listening at Horace Boyer's grandmother's house: "I'm 8 years old, and here's this choir — sounds like, for me, a hundred people singing. In my sanctified church in Winter Park, Fla., we had no choir. But here's this choir singing these gorgeous Negro spirituals, and it was just the rage among the whole black community throughout the South, about which I knew, and I'm sure it was the same in the North."

In the summer of 1940, Time magazine reported that Wings Over Jordan was heard on more than 100 stations across the country, with an extended reach around the world via shortwave.

Wings Over Jordan was born in the sanctuary of Gethsemane Baptist Church on Cleveland's east side. In the 1930s, the city was a collection of ethnic neighborhoods — Italian, Polish, Slovak — and each one got an hour on the radio. But Gethsemene pastor Glenn T. Settle found no such program for the local African-American population. He went to WGAR, and in the summer of 1937, The Negro Hour hit the airwaves, with Settle delivering homilies between the hymns.

Teretha Overton is Settle's granddaughter. "Grandpa Settle always had a white shirt and a tie," she says. "Always, even in 95-degree weather. I think he refused to sweat."

One of those doors led the group to national fame when the show, renamed Wings Over Jordan, was picked up in January 1938 by the Columbia Broadcasting System, or CBS.

That is how gospel scholar Horace Boyer was able to hear the shows in Florida. He says the music carried more than religious inspiration: "We were in the heat of segregation: sitting on the back of the bus, going to a different bathroom, drinking from a water fountain, going to a different school," Boyer says. "But, on Sunday morning, we became citizens of the United States, because we could turn on that radio and we could hear this singing, and there was no mistaking — these were black people."

It wasn't just the music that pulled ears to the radio. Every week, Wings Over Jordan featured a black artist or scholar, such as Langston Hughes, Adam Clayton Powell, or Mary McLeod Bethune. Up until then, such voices and ideas were all but absent on national radio.

By virtue of being on CBS, Wings Over Jordan reached tens of thousands of ears — not all of them black. John Foxhall, whose father was an original member of the Wings Over Jordan Choir, says that some of the guest speakers told stories that must have shocked white audiences.

"Many times, particularly during the '30s and '40s, when there were numerous lynchings or killings of African-Americans in the South, these stories were not carried in depth by the white media," he says. "A number of the speakers ... he would bring them on, and they would use his Sunday-morning broadcasts as an outlet to help let the world know what was happening and the injustices being done in many areas."

In effect, the Wings Over Jordan broadcasts were used as a way to sneak information past the indifference of white station owners. In much the same way, spirituals were used by slaves as a way to communicate stories about their suffering and about planned escapes.

Those voices fell silent in August 1947, when Glenn Settle's devotion to message over money allegedly caused a rebellion by some of his singers, who went on strike for higher wages. The network canceled the program a month later.

Some scholars call Wings Over Jordan an early voice of the civil rights movement. Helen Turner Thompson, 77, says the show had a message for everyone. "The messages that they sang gave the black people hope. We still sing those songs, written by black writers, because we're still in that hope that one day we will be ... just ... people."