Accessibility links
Religious Leaders Help Renters Buy in New Orleans The Jeremiah Group has developed a loan plan to turn the city's low-income renters into homeowners. Instead of rejecting the idea as an impractical suggestion by idealistic do-gooders, the state embraced it. 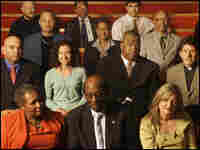 Leaders with the Jeremiah Group, part of the Industrial Areas Foundation, which is a national group started by community organizer Saul Alinsky. Greg Miles for NPR hide caption 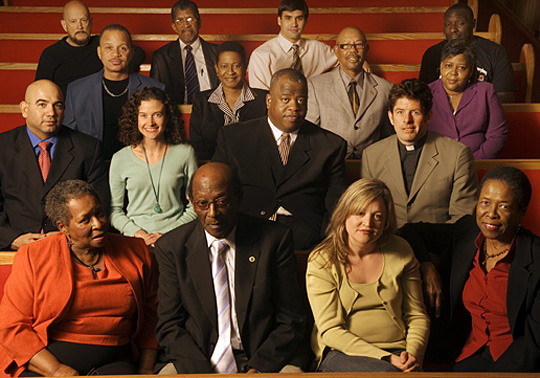 In post-Katrina New Orleans, neighborhoods suffer from something locals call the "jack-o-lantern" effect: New and rebuilt homes are scattered amid derelicts and empty lots.

Nestled among the freshly planted gardens and newly painted rehabbed homes in the Gentilly neighborhood, there are two or three derelict houses.

In recent months, it's become clear that at least 7,500 homeowners in Gentilly — as well as Lakeview, the Lower Ninth Ward and other neighborhoods in New Orleans — don't plan to ever return. Instead, they're taking a buyout from the Louisiana Recovery Authority's (LRA) Road Home program and turning their houses over to the state.

But in this landscape of abandoned homes, a group of three-dozen religious leaders — called the Jeremiah Group — sees an opportunity to solve another New Orleans crisis: the lack of affordable housing, which has pushed rents beyond the means of many residents.

Since Hurricane Katrina hit land two and a half years ago, more than $10 billion has been allocated to help homeowners rebuild in New Orleans and elsewhere along the Gulf Coast. Before the storm, however, most of New Orleans' residents weren't homeowners, but renters.

The Jeremiah Group has developed a plan to help many of those renters buy.

'Seek the Welfare of the City'

The group was founded nearly 15 years ago as part of the Industrial Areas Foundation, a national group started by community organizer Saul Alinsky.

Jeremiah Group member Nell Bolton, who's with the Episcopal Diocese of Louisiana, says the organization took its name from a passage in the Bible.

"The prophet Jeremiah is telling the Israelites, who are in exile in Babylon, to 'seek the welfare of the city, for in its welfare you will find your own.' And that's the motto of the Jeremiah group locally," Bolton says.

Long before Katrina, the Jeremiah Group was active in on grassroots issues, such as fighting for better bathrooms in the schools and advocating for safer neighborhoods.

But after Katrina, the Jeremiah Group found a new focus as people returned to New Orleans and tried to pick up their lives, says Jaime Oviedo of Christ Temple Church.

Renters, in large part, have been all but forgotten in the rebuilding process. The LRA does have a small program to help landlords rebuild. But after the storm, rents in New Orleans have shot up — in some cases nearly doubling.

In small house meetings across the city, Jeremiah Group leaders heard from residents who felt that the government had let them down. Group member Janet Barnwell says for many, it was natural that they turned to their churches and to people they trusted to share their stories.

"When Jeremiah was available to churches and to community organizations, people spoke up. And perhaps people who had never spoken before, who'd never wanted to be political activists, spoke up," Barnwell says.

Out of those stories, the Jeremiah Group developed a plan.

To help renters, the group drew on an idea used by its sister organizations elsewhere in the country: "soft second mortgages." These are loans designed to help families with low incomes — under $46,000 a year — transform themselves from renters into homebuyers. Borrowers can each tap into as much as $50,000; the loan is forgiven if the buyer stays in the home for 10 years.

Robert Steinfeld, a Jeremiah Group member, says the plan creates a new market of potential homebuyers in New Orleans — renters who can now transform their monthly lease payment of $800 or $1,200 into a monthly mortgage payment. With the help of a soft second mortgage, that monthly payment could let former renters buy a $100,000 to $150,000 house, he says.

"We're probably pushing [the housing market] up because there's not this jack-o-lantern effect, there's not these holes in every block," he says.

And here's perhaps the most surprising part of the Jeremiah Group's story: When the community group took its proposal first to the New Orleans Redevelopment Authority and then to the Louisiana Recovery Authority, instead of rejecting it as an impractical suggestion by a group of idealistic do-gooders, both government agencies embraced it.

Officials with the LRA have agreed to set aside $75 million for the soft second mortgages. They're now working on details of how the program will be administered.

Pride in the Neighborhood

In the meantime, the Jeremiah Group has begun working to identify people who, with a little help and a soft second mortgage, might be ready to move into homeownership.

"If I can pay $895 in rent, I can pay $895 to be a homeowner, Jackson says. "So now, I'm a proud peacock, you know, my feathers are out. I'm living in the neighborhood. And when a person is a part of something, they have pride about themselves."

The LRA has agreed to set aside half the abandoned homes it acquires in New Orleans — between 3,000 and 4,000 houses — for the soft second mortgage program.

Members of the Jeremiah Group see that as the start of a movement that they hope could eventually transform New Orleans' housing market. Bolton says that while it's ambitious, it's not unprecedented.

"This may be an unprecedented disaster, but when you look at the GI bill, post-World War II, that created a housing boom in the country, because it created opportunity for first-time buyers where before there had been none," Bolton says. "So we see this as an opportunity to look at our city and say, 'OK, we're facing unprecedented times. Let's try something creative and large-scale.'"

While it is active in planning and promoting policies it believes are important to the city's future, the Jeremiah Group says it won't be involved directly in the selection of homebuyers or other aspects of the soft second mortgage program.

Members see Jeremiah's role most of all as that of a listener, who hears what people in the community are saying. And Katrina, they're hearing, has been a transforming experience.

Group member Sherman Shelton, pastor of Firehouse Family Ministries, says that before the hurricane, he had been focused on the needs of his congregation and immediate neighborhood.

"After the storm, all that perspective has changed. And Jeremiah has given us an opportunity to not only take care of our backyard but to assist everybody's backyard," he says.

There are still lots of hurdles for the soft second mortgage program. The New Orleans Redevelopment Authority is negotiating with the state about how and when it will take possession of properties abandoned after Hurricane Katrina. And the LRA still has to allocate funding.

But all parties have signed on, and it's hoped that by next year, some of New Orleans' former renters can begin moving into rehabbed homes that once were abandoned.