Accessibility links
Shelby Lynne Gives Dusty Her Due Lynne's latest album is a tribute to Dusty Springfield — nine covers and one song inspired by The White Lady of Soul. Lynne talks about her approach to the songs, her respect for Springfield, and how much whiskey she had to drink to take on songs originally recorded by her idol.

Songs from 'Just a Little Lovin'"

Anyone Who Had A Heart

'I Don't Want to Hear It Anymore' 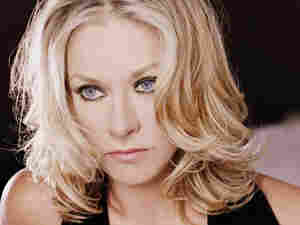 Shelby Lynne's album I Am Shelby Lynne helped win her a Grammy for Best New Artist in 2001, but it was actually her sixth full-length record. Since then, Lynne has put out four more. Her latest, Just a Little Lovin', pays tribute to the late Dusty Springfield with nine covers and one song written by Lynne. Here, she talks about her approach to the songs, her great respect for Springfield, and how much whiskey she had to drink to take on songs originally recorded by her idol.

Lynne says she chose songs from Springfield's repertoire that she could sink her teeth into — the ones she could make her own, respectfully, while keeping Dusty in mind. But never "Son of a Preacher Man." She says there was no way she was going to touch that one.

Even the lesser-known songs made Lynne nervous. The idea of messing with any of Springfield's music had her hitting the flask in the studio: "I drank more whiskey making this record," she says. Her nerves were wracked by making a covers record of songs that everyone loves, by a singer everyone loves. But she says she wasn't scared off: "I knew I had to be somewhat daring, because everybody's heard these songs a million times."

Lynne went for a different sound than Springfield did. The songs in Springfield's era, the 1950s and '60s, were huge — full of horns and strings. So Lynne scaled the music down on her versions and, she says, "let the song do the work."

Other than a general idea, though, she didn't have arrangements in mind before she entered the studio. In fact, she tried not to think about it too much. "My band can tell you, I'd rather do anything than rehearse," she says. "If you think too much about something, you're not feeling it."

The producer Phil Ramone, who's helped make records for Frank Sinatra, Ray Charles, and Paul Simon, worked with Lynne on Just a Little Lovin'. Lynne says she felt comfortable in the studio, in a process that took only five days. "If you know what you're going after and you have your list of songs, do it and get out of there," Lynne says.

The one original tune on the album is "Pretend," a song Lynne wrote a while ago but had never released. "I feel like Dusty would have dug it," she says now. Springfield probably would have, as she was always singing about what couldn't be — unrequited love.

Lynne says she has always loved Springfield's singing. "You believed every word she said," Lynne says. "I still believe it."