Accessibility links
Dogs of War Play Key Role in Iraq About 1,000 dogs have been on the front lines of the war in Iraq. Mostly Belgian Malinois and German shepherds, they are trained to detect roadside bombs and sniff out other dangers. They earn the affection of their military handlers. 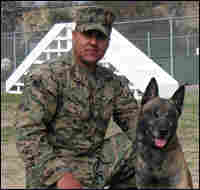 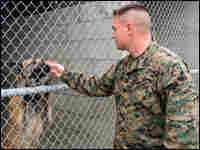 Sgt. Benjamin Maple visits Arco at the kennel. He served in Iraq with Arco for two years and says he hopes to adopt him one day. Gloria Hillard, NPR hide caption 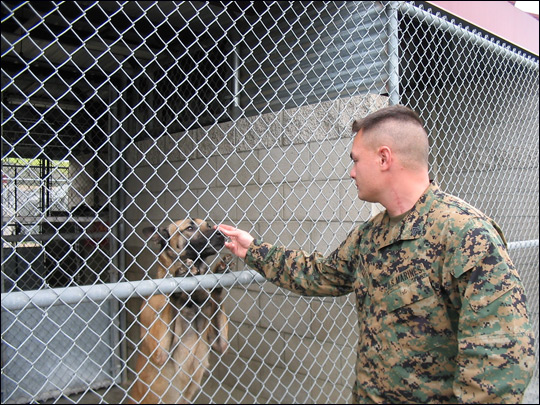 Sgt. Benjamin Maple visits Arco at the kennel. He served in Iraq with Arco for two years and says he hopes to adopt him one day.

About 1,000 of the military personnel who have served on the front lines of the war in Iraq look quite different from the rest. They are dogs.

Mostly Belgian Malinois and German shepherds, some Labrador retrievers and golden retrievers, these war canines are trained to take bullets for their comrades, detect roadside bombs and sniff out other dangers.

They typically serve the Department of Defense for 10 to 13 years, often with longer and more frequent deployments than their handlers. Three have been killed this time around in Iraq, and many more have been seriously wounded. Consequently, they sometimes need a little R and R. Camp Pendleton in southern California is where they get it.

"They deploy and they come back, that's a rough time for them and they're stressed out just the way we get stressed out," explains Marine Sgt. Benjamin Maple, a trainer at Camp Pendleton's canine unit. At his feet, "Corporal Jerry," a Belgian Malinois, wags his tail.

Maple has been deployed to Iraq three times. He has seen a lot, he says, but when he talks about his other dog, Star, something changes in his eyes.

"I almost walked on an IED but he was ahead of me, he saved my life. He saved the lives of a couple Marines that were with me," he says. "That dog has seen more combat, he puts me to shame. I actually named my daughter after him, I just had a baby girl and I got his name tattooed on my arm."

Dogs like Star are rotated from handler to handler throughout the years. The breaking of these well-established bonds is the toughest part of being in the canine unit, says Lance Cpl. Justin Granado.

"You come back, and they take you off that dog and put you with another dog, and you spend a lot of time and go through what you go through. It's tough. He sleeps with you at night, and you do everything together. It's like taking your best friend away," he says.

Dogs are not new to battle. Four-legged soldiers and Marines have served the U.S. military in many capacities since World War I. The challenge in Iraq, however, is the weather. Blowing sand and scorching 130-degree heat take a toll on the dogs.

There is more than explosive-detecting practicality to the dog forces. Canines can be morale boosters, Maple says.

"It gives them some kind of remembrance of back home, their dog back home that they haven't seen. And it makes them a little bit happier," he says.

The grassy obstacle course of Camp Pendleton's canine training unit is a far cry from Iraq or even Lackland Air Force Base in Texas, where the dogs undergo training.

Camp Pendleton is simply a peaceful intermediary. And soon the dogs — affectionately assigned ranks above those of their handlers — will return to Iraq.

Maple has a plan for 80-pound Arco, whom he served with in Iraq for two years. If and when the dog, currently recovering from an injury at Pendleton, makes it back from his next trip to the front lines, he says, he will bring the dog home.

If Arco comes up for adoption, as the dogs usually do, Maple says, "I'm going to be the first one calling: 'Hey, I want that dog.' "