Accessibility links
Ohio's New Voting System Revs Up for Primary Ohio's vote in Tuesday's primary will be crucial, but there could be a delay in getting results. The state is making major changes in the way its residents cast ballots, especially in its most populous county, Cuyahoga. The county is instituting an optical scan paper ballot system, rather than using electronic voting machines.

Listen
To ensure that Cuyahoga County voters understand how to use the paper ballots, the board of elections has created this tutorial video. 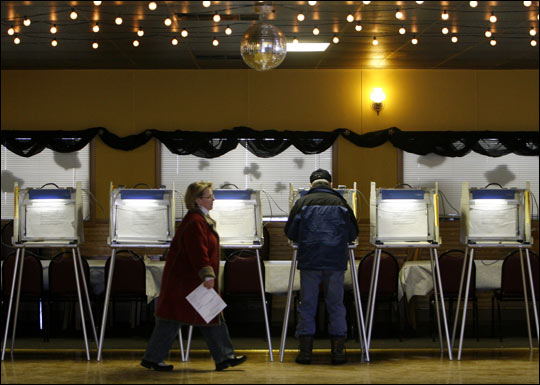 Wisconsin voters used paper ballots in their Feb. 19 primary — just as Ohio voters will do on March 4.

Ohio's vote next Tuesday will be crucial in the Democratic presidential primary race, but there could be a delay in getting a final tally.

The state is making major changes in the way its residents cast ballots, especially in its most populous county, Cuyahoga, which includes the city of Cleveland.

In December, the county was directed by Ohio Secretary of State Jennifer Brunner to scrap its touch-screen voting system, which had been plagued with problems, and to replace it with optically scanned paper ballots.

Now, in the final days before the primary, Cuyahoga County's new election director, Jane Platten, is trying to prepare for every contingency. "The other day, I'm sitting here thinking, 'Oh God, it's going to be damp and it's going to be cold. We need to test cold, damp ballots.' "

So, she had her staff put a box of ballots outside for three hours before running them through one of the 15 optical scan machines that will be used on primary night. The county has been testing the machines almost daily. Staffers have also ripped ballots and spilled coffee on them — anything to anticipate what might gum up the works.

Platten has reason for concern. The county had to completely revamp its voting system in only two months. Secretary of State Brunner ordered the change, in part because Cuyahoga had huge voting problems in 2004 and '06, including lost memory cards and challenged results.

"We've been through so much in this county. Anything that we can test to prevent bad things from happening is the way we should do it now," Platten says.

The effort has been extraordinary. More than 6,000 old punchcard machines were taken out of storage and retrofitted, so voters can basically use them as desks for marking their paper ballots. More than 4,000 different ballot types had to be prepared, and 7,000 poll workers had to be trained on an entirely new system.

While all that has been going on, thousands of the county's 1 million registered voters have been voting early. Residents have been encouraged to cast absentee ballots to avoid long lines and polling place problems on Tuesday. Everyone expects a huge turnout, in part because the Democratic race between Illinois Sen. Barack Obama and New York Sen. Hillary Clinton is so close.

Candice Hoke directs the Center for Election Integrity at Cleveland State University. She thinks Cuyahoga County has done a good job so far preparing for the primary, but she says there are bound to be some problems.

"Will there be errors, particularly at the polling locations? Likely. Logistics? Probably. We've gotten better and better, but that's still going to be a challenge," she says.

Hoke's biggest concern is a plan to pick up some ballots in the middle of the day. The county wants to get a jumpstart on counting votes, because scanning all that paper will take a lot longer than tallying votes on electronic touch-screen machines. In fact, no one expects primary results from Cuyahoga until sometime Wednesday. But Hoke says collecting ballots midday means some polling will have to shut down, no matter how briefly.

"Voting succession, voting interruption and possibly disenfranchising voters who can't stay — that is a huge concern," she says.

Also of concern is whether voters will fill in their paper ballots correctly. The county didn't have enough time to purchase optical scan machines for each polling place, which would have helped to detect errors on the spot, giving voters a chance to correct them.

"Which is why you've got to check over your ballot very carefully before you submit it," Jocelyn Travis says. She is the director of Ohio Votes, which helps nonprofit groups guide their clients through the voting system. Travis and others are trying to get the word out to voters to fill in the ovals and not to circle them, and not to vote for more than one candidate per race.

"Know what's on the ballot. Know if you have any questions or problems, there's someone inside that can assist you, and there are also volunteers on the outside ready to assist you," Travis says. In fact, teams of voting rights attorneys from around the country will be in Cuyahoga County next week monitoring the polls.

But the changes aren't confined to Cuyahoga. Secretary of State Brunner instructed election officials to provide paper ballots to any Ohio voter who requests one. She thinks electronic voting machines are too insecure and wants them gone statewide by November. Not everyone's happy with the switch to paper, but Brunner told a town hall meeting in Akron this week that she's trying to avoid another voting meltdown.

"Whatever happens in Cuyahoga seems to reflect on the rest of the state of Ohio, and I want my state to be successful, and I want the rest of the country to quit looking at Ohio as a pariah," she said. Brunner knows that a smooth vote Tuesday is the key.

Campaigning in Ohio ahead of Tuesday's primary, Sen. Barack Obama responds to criticism that he's too inexperienced on foreign policy. Obama countered that Democratic contender Sen. Hillary Clinton's judgment is flawed, given her vote for the war in Iraq.

DON GONYEA: I'm Don Gonyea, traveling with the Obama campaign. Yesterday found the candidate at a high school gymnasium in the town of Westerville, Ohio, outside of Columbus.

Senator BARACK OBAMA (Democrat, Illinois; Democratic Presidential Candidate): Our nation is at war. Our planet is in peril. But most important, I think, for so many people here in Ohio, the dream that so many generations fought for feels like it's slowly slipping away.

GONYEA: This was the same town where Senator Hillary Clinton had been just a few hours earlier. Obama responded to criticism from Clinton that he's too inexperienced on foreign policy. Her campaign has been running an ad featuring a phone ringing in the White House at 3:00 a.m. It argues that she is the one with the experience to deal with a crisis. Obama counters that Clinton has already shown her flawed judgment by voting to give authority to go to war in Iraq.

Sen. OBAMA: To this day, she won't even admit that her vote was a mistake or that it was even a vote for war. So besides the decision to invade Iraq, we're still waiting to hear Senator Clinton tell us what precise foreign policy experience that she is claiming that makes her prepared to make that - to answer that phone call at three in the morning.

GONYEA: Traveling with Senator Obama in Ohio yesterday was Democratic Senator Jay Rockefeller of neighboring West Virginia. Rockefeller is chairman of the Senate Intelligence Committee and has served in the Senate for a generation. So the Obama camp regards his endorsement as a rebuttal to Clinton.

Rockefeller was asked about Clinton's admitted failure to read the classified National Intelligence estimate on Iraq prior to voting to authorize war. She says she was briefed on the document. Here's Senator Rockefeller.

Senator JAY ROCKEFELLER (Democrat, West Virginia; Chairman, Senate Intelligence Committee): See, I don't really know what that means, but it's not the kind of the thing that you just get briefed on. I mean, the issue is deep enough so that you went and you did it.

GONYEA: Meanwhile, Obama wrapped up his final stop in Ohio before the primary with more talk of Clinton and her criticism that he gives great speeches but offers little in the way of specifics.

Sen. OBAMA: I think that the reason that we've done well is because people understand that the problem is not who's got the 10-point plan, because everybody's got a 10-point plan. The question is who can bring the country together so that we have a working majority to actually bring about change.

GONYEA: Then Obama headed home to Chicago for a night with his family, perhaps a sign that one more evening event in Ohio wouldn't be enough to make a difference in a state where he's been closing the gap but remains behind. Today, he has a full day of events in Texas, the state that may be his best chance to clear himself a path to the nomination. Don Gonyea, NPR News, Chicago.