Accessibility links
In Highland Peru, a Culture Confronts Blight Nothing is more important than the potato in the highland villages of Peru. But Peru's potato culture faces its biggest threat yet: Global warming has opened the door to the disease that caused the Irish potato famine. 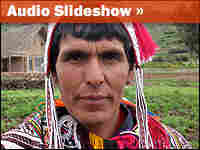 Andean Peru is a colorful world -- and the highland potatoes are just as vivid. Take a photographic journey.
Jane Greenhalgh, NPR 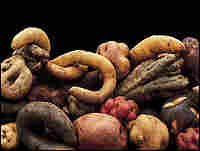 In remote farms in the Andes Mountains, elevated thousands of feet above sea level, climate change is threatening a crop that is part of the region's identity: the potato. Farmers here say warmer temperatures are opening the door to the disease that caused the Irish potato famine. And unusual cold snaps during the growing season are also causing problems. The disease could be particularly devastating to Peru, because in these villages the potato is more than just a food — it's a culture.

Vicente Hermogenes Baca Huaman is one of Peru's indigenous potato farmers. A wiry man, he is hoeing a potato field by hand. With his fierce lined face and hooked nose, he is resplendent in a traditional fringed cape, stripes and triangles woven in brilliant colors. His ancestors have hoed this land, just this way, for thousands of years.

He tells us potatoes aren't growing as well as they used to in his sloping field nestled just below green mountain peaks. His land is part of a potato park — a preserve, set up by a non-governmental organization called Association Andes. The association is helping six neighboring villages hold on to the old ways.

"Potato is not just food. Potato is also spirituality; it's culture," Argumedo says. "There are songs, dances, ceremonies. So this is a potato land a culture of potato."

Potatoes originated in Peru. They fed the Inca empire. There is a potato god.

Other staples grow here — corn and quinoa, for example. But potatoes have special cultural symbolism. They are as important as rice is in China.

"Potatoes are like living beings," Argumedo says. "People treat them like that. They are members of the family for farmers."

Moving Up the Mountain

Now local farmer Baca Huaman is working on an experimental plot — he's growing dozens of different kinds of potatoes to find the ones that can tolerate the change in weather. A mountain peak spiked with fir trees rises behind his field. His face softens as he turns to look at it.

"When I was a boy, I used to go with my father to the mountain and it would be covered in snow. We would see snow all over these fields," Baca Huaman explains in his native tongue, Quechua. "But there is never snow here anymore."

In the past 40 years, Peru has lost nearly a quarter of the glaciers in the Andes to rising temperatures. No one has quantified the precise climate changes in this little village, but Baca Huaman knows. The weather used to be so regular that he knew just when to plant each variety of potato.

Now he says nothing is predictable. It's warmer, yet there are early freezes, and the rains don't come when they should.

This new weather is encouraging plant diseases that were rarely a problem before. The most serious is an infection called late blight. It was late blight that caused the Irish potato famine in the mid-1800s. Some of farmer Baca Huaman's fields were hit recently. So he has had to move some of his potatoes up the mountain, nearly 900 feet higher, where it's colder.

"We are moving our crops higher up the mountain," he says. "They are healthier, and we get a better yield at the higher altitude."

It isn't really convenient — an hour and twenty minutes' climb up from his home. He gets there only two or three times a month.

Throughout history, these farmers have nurtured thousands of potato varieties, because El Nino has always brought changes in the weather, says Alejandro Argumedo of the Andes Association.

"They have to adapt their crops to those conditions, and they look for how to create conditions in every little niche," Argumedo says. "So the diversity of crops they created is a response to the chaos of the system."

As climate change adds to the chaos, the farmers are counting on this diversity. Each village has a few hundred types of potatoes in its own collection. Some potato varieties have been lost to time. But there's one place that has thousands.

The gene bank at the International Potato Center is far from the Andes Mountains, on the coast, in Lima. Carlos Arbizu is a plant geneticist at the institute. He can offer farmers any kind of potato they need.

There are stores of dry seeds. There are racks of test tubes holding isolated plant shoots. Out in the hallway, near the huge freezers storing germ plasm, there are potatoes on tables.

There's a potato here that's given as a gift when a parent selects a godfather for a child. Another is eaten when a young boy has his first haircut. Arbizu holds up a potato that looks like a bunch of fat purple grapes glued tightly together. A wife-to-be has to pass a test.

"The lady has to show her future parents-in-law that she will be a wife dedicated to her family by peeling successfully this potato," he says. "It is very difficult to peel it."

Certain varieties of the institute's potatoes haven't been grown widely for years. Up in the Andean village of Paru Paru, farmers are testing some of them now.

Two young boys blow into huge seashells carried up from the Pacific Ocean. It's a traditional summons. About a dozen farmers have gathered to discuss climate change.

Two women are cooking in an open stone room fronting a little courtyard within the village school. It is an incredibly delicious soup, thick with potatoes and quinoa and some kind of meat, maybe goat. One of the cooks says she has 250 varieties of potatoes to choose from.

This Andean potato heritage could be the solution to climate change for the indigenous farmers. They turned down new varieties the government offered because the plants would need fungicides, pesticides and fertilizers. They preferred the institute's varieties that have been boiled, fried, mashed and poached for centuries.

There will be more gatherings like this one, as the farmers learn more about the new weather, and what grows well where. And each meeting will likely start with potato soup. Because, as they say here, soup without potatoes is like life without love.