Accessibility links
Rhode Island Refuses to Be Overshadowed March 4 All attention in Tuesday's primaries is on Texas and Ohio, but voters in two other states are going to the polls that day as well. In one of those states, Rhode Island, Hillary Clinton is hoping to win delegates and end Barack Obama's winning streak.

All attention in Tuesday's primaries is on Texas and Ohio, but voters in two other states are going to the polls that day as well. In one of those states, Rhode Island, Hillary Clinton is hoping to win delegates and end Barack Obama's winning streak.

NANCY COOK: Pawtucket, Rhode Island is a small working-class city full of old factories and mill buildings that are now being turned into fancy lofts. Most of the residents are immigrants or blue-collar workers who have lived here their whole lives in triple-decker houses or small bungalows that sit just a couple feet apart. Thirty-eight year old Toni Windcoup(ph) is trying to get out the vote for Barack Obama. She's never been politically active before, but even her 8-year-old daughter, Morgan(ph), who does not plan to vote on Tuesday, is jazzed about Obama.

MORGAN WINDCOUP: Because he's really going to help kids learn more and I would like to see that to get into college so I can cook and do different recipes...

COOK: (Unintelligible) an unscientific survey of voters living on Columbine Street, find some but not all agreeing with Morgan. Megan Wagner(ph) is a waitress at the Olive Garden restaurant. She has her hands full with trying to get her two young kids to sit down at breakfast. But she's not too busy to talk politics.

MEGAN WAGNER: I think either way it's going to be just a good choice, I'm just a little torn up to what I'm going to be doing. Like, at first I was completely Hillary, but after her explained to me a little bit about the medical situation and what her plans are and what his plans are, I'm leaning a little more towards Obama.

COOK: A few doors down Claire Lollier(ph) says she 82, a life-long Democrat and leaning towards Clinton.

CLAIRE LOLLIER: She's real smart. She's a real smart lady. Anyway, she does know what she's talking about. Let's put it that way.

COOK: One thing that few people here ever suspected would happen is that suddenly Rhode Island's primary is getting noticed, says Brown University's Darrell West.

DARRELL WEST: Rhode Island always has been the off-Broadway political venue. Nobody really pays much attention to the state, so people here are very excited that suddenly our vote really matters. It actually could be decisive along with that of Ohio and Texas, so I think turnout is going to be up substantially.

COOK: Earlier in the week, Clinton was here and talked about the economic issues important to Rhode Islanders, home foreclosures and jobs moving overseas. After the rally, Scott Duhamel, the business rep for the local painter's union said he's voting for Clinton.

SCOTT DUHAMEL: We're supporting the Senator for a number of reasons and largely economical I would say. Some of the things that concern us most is the healthcare and the country's economy as, you know, most labor unions are concerned about that. We think that she's probably the most electable candidate although I will tell you quite clearly, the last Dem standing. We'll be there for whoever that may be. 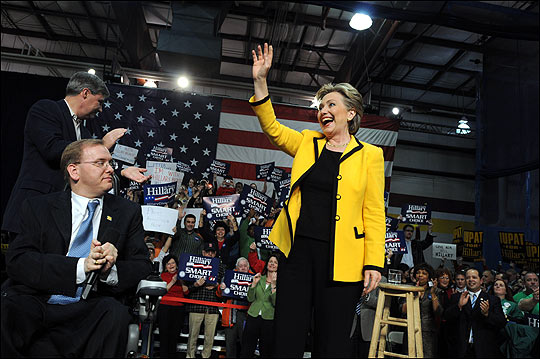 New York Sen. Hillary Clinton takes the stage on Feb. 24 in Providence, R.I., in advance of the state's upcoming primary. Former President Bill Clinton was also scheduled to make a campaign stop in the state.

Rhode Island, Ohio, Texas and Vermont are holding their primaries on March 4, in a make-or-break day for New York Sen. Hillary Clinton. Read about what's at stake in these states and contests.

As in much of Rhode Island, Pawtucket's residents are primarily blue-collar, union workers: mechanics, waitresses and teachers, who live in triple-decker homes or tidy bungalows that sit just a few feet apart.

Although the city of 70,000 has seen its share of old factories converted into loft apartments, the downtown's main attraction is a defunct cotton mill that dates back to the late 1700s and now doubles as a museum.

This is the type of town with the kind of voters who have supported New York Sen. Hillary Clinton in past primaries: the white working-class who make less than $50,000 a year.

But a recent local Brown University poll shows that Illinois Sen. Barack Obama is making inroads in the state, the same week that he is also leading in nationwide polls for the first time. This is despite the fact that Obama has not actually visited Rhode Island, one of four states that will hold primaries on March 4. His campaign announced that he plans to stop in the state on Saturday.

Six weeks ago, Clinton had a 16-point lead over Obama in Rhode Island. Now, that margin has dwindled to just 8 points.

Both Clinton and her husband, former President Bill Clinton, are making campaign stops in the state. They hope to solidify her advantage there. A victory in Rhode Island alone won't save Clinton's campaign: It offers just 21 delegates. But it could help if she only narrowly wins the larger March 4 primary states of Ohio and Texas, which have 141 and 193 Democratic delegates at stake, respectively.

On a recent chilly Sunday morning, Obama supporters canvassed in Pawtucket to try to close the gap between the two candidates even further. Toni Wynkoop, 38, and her two daughters were among the volunteers. Wynkoop said she felt inspired by Obama's speeches, as well as his health care plan.

One of her first stops was the first-floor apartment of 23-year-old waitress Megan Wagner, who has two young children and who works at a nearby Olive Garden restaurant. Originally, Wagner supported Clinton because she wanted to vote a woman into the White House. Now, she finds herself leaning toward Obama as she examines the two candidates' health care plans. (Clinton's plan would require that everyone have insurance, paid for by a web of individual, government and employer money, while Obama's plan requires only children to get health care and then offers subsidies and tax credits for adults who cannot afford the plans).

"When I heard about national coverage, I thought that was what Hillary was going to be doing," Wagner said. "But if she is going to garnish wages, or doing whatever she has to do to cover that, whereas Obama is taking it and you are paying your own pay, you're probably better off."

A few doors down, 82-year-old registered Democrat Claire Lallier cautiously opened her door to the canvassers. She has not yet committed to either candidate, but she said she preferred Clinton.

"I think she's a real smart lady. She's a very good speaker, that's what I like about her," she said.

According to Brown University political scientist Darrell West, this split among blue-collar voters is happening across Rhode Island.

"[Obama] is starting to make inroads into her core constituencies," West said.

"I expect Rhode Island to be very competitive, certainly when you judge from the advertising," West said. "Clinton still has an edge, but Obama has the momentum on his side."

Although Obama is outspending Clinton three-to-one in advertising, Clinton has put in the face time.

In her determination to hold onto the state's blue-collar voters, Clinton even risked alienating a big booster and Democratic superdelegate, the mayor of Providence, David Cicciline. The Clinton campaign asked him not to attend any of her three Rhode Island events, including a private fundraiser, because Cicciline is involved in an ongoing contract dispute with the local firefighters' union.

Union members saw it as a blatant, but ultimately effective gesture. "We think she's a good judge of character," said Paul Doughty, president of the firefighters' local 799. "It was a tough decision she had to make. She stood with the firefighters."

After the Clinton rally, several men wearing T-shirts and carrying printed signs bearing the names of their unions stood in one corner of the gymnasium. Scott Duhamel, the business representative for the local painters union, said his union's roughly 2,000 members are supporting Clinton — for now.

"We're supporting the senator for a number of reasons, largely economical," Duhamel said. "Two of the things that concern us the most are health care and the economy. We think she is probably the most electable. Although, I will tell you, quite clearly, we'll be there for whoever is the last Democrat standing."