Accessibility links
Blanche DuBois: Chasing Magic, Fleeing the Dark She's one of theater's Everest roles, exhausting, perilous — and irresistible to any actress with a sense of adventure. Even Marge Simpson couldn't resist her. NPR's Lynn Neary asks why Streetcar is such a wild ride. 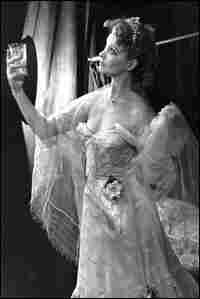 Who wants real? Blanche DuBois (Vivien Leigh in the 1949 London production) prefers escape into illusions, and into the past. Kurt Hutton/Hulton Archive/Getty Images hide caption 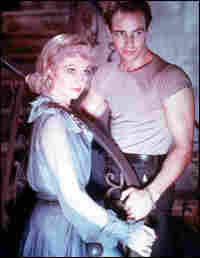 'I Loved Someone Once'

'The Kindness of Strangers' 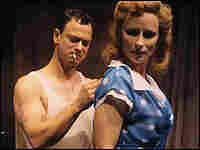 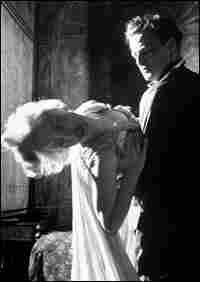 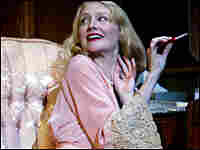 When she boards the streetcar that will take her to her sister Stella's home in New Orleans, Blanche DuBois knows she's headed for a place where she doesn't belong — and where, she will soon discover, she "is not wanted."

Blanche DuBois, the fallen Southern belle at the center of Tennessee Williams' A Streetcar Named Desire, has been a character so rich and so complex that bringing her to life is one of acting's greatest challenges.

Playing her is like climbing Mount Everest, both physically and emotionally demanding. Actresses talk of losing their voice, suffering bouts of depression or having anxiety attacks while playing the part.

Yet they covet the role.

"Well, Blanche is the center of the play — all the action happens because of her," says actress Glenn Close. The star of Fatal Attraction and TV's Damages got her shot at Blanche in 2002, under the direction of Trevor Nunn at the Royal National Theatre in London.

'There's No One Blanche'

When Blanche arrives on her sister's doorstep, she's penniless and alone. A fading beauty, she's lost her job, her home and (it will soon be revealed) her reputation.

Clinging to the past, she cannot face the reality of her life. She hangs Chinese lanterns around her sister's apartment to soften her grim surroundings; she tries to use her feminine wiles to defuse the hostility of Stella's husband, Stanley Kowalski.

The first actress to play Blanche was Jessica Tandy, who starred opposite the Stanley of newcomer Marlon Brando when Streetcar premiered in 1947. Tandy's performance is legendary. She made the role her own, even though Brando's naturalistic acting style and overt sexuality threatened to overshadow her performance.

When the play was made into a film, Vivien Leigh, who'd played Blanche two years after Tandy, in the play's London premiere, put her own stamp permanently on the part. Ever since, each actress who dares to take on the role has had to confront both of those performances, which did so much to shape perceptions of the character. Yet each actress must encounter Blanche anew.

Kahn, artistic director at Washington, D.C.'s Shakespeare Theatre Company and former head of the Juilliard School's drama program, staged a production of Streetcar at the McCarter Theatre in Princeton, N.J., in the 1970s. And he knew Tennessee Williams.

"Every Blanche who played it that Tennessee saw, he would tell them that they were his favorite Blanche," Kahn says. "Because each actress brought something different to the role than somebody else, and I think he liked that."

Knight tackled Blanche again a few years after Kahn's Streetcar because she felt she hadn't finished with the character. The second time, Knight says, she came to a new understanding of the energy Blanche brings with her from the moment she appears.

"She is, from the onset, a moth that is fluttering too near to the flame," Knight says. "And she never stops."

"Because we all are sometimes insecure, or petty," Knight says. "Looking down on other people ... wanting safety — and Blanche was searching for safety, and she never had it."

'There is Nobody Rooting for Blanche'

"It's the loneliest part to live through that I've ever played on the stage," she says.

Harris played Ophelia opposite Peter O'Toole in the Hamlet that inaugurated the Royal National Theatre in 1964. Summer-blockbuster fans know her as Peter Parker's Aunt May in the Spider-Man movies. She starred as Blanche in the 1973 Lincoln Center production of A Streetcar Named Desire.

"Most people, even if they're unsympathetic characters like Lady Macbeth or somebody, at least she has ... Macbeth rooting for her," Harris says. "But there is nobody rooting for Blanche. And you go through that night after night, and it begins to get to you. It's very, very lonely up there."

Glenn Close on the Nobility of Blanche's Delusions

Shirley Knight on Interpreting 'The Kindness of Strangers'

What saves Blanche, and makes her tragedy more bearable, says Harris, is her humor. Harris says too many people fail to see that parts of the play — especially some of the exchanges between Blanche and Stanley — are meant to be funny.

"They're very witty," she points out. "They're very funny with each other; they spar. They strike sparks off each other. And it's obviously sexual — right from the beginning, too. But it's a sexual thing with wit."

Laila Robins, who played Blanche in the 50th-anniversary production at Chicago's Steppenwolf Theatre, agrees. The humor, Robins says, erupts from "the things that come out of her that you don't expect."

In fact Blanche is a character filled with contradictions — and that, says Robins, is the real challenge of the role.

"As much as she wants to see beauty in life, and magic and propriety, and have this certain aesthetic, she is also an incredibly sensual, lonely, hungry woman," Robins says. "And you keep rocking back and forth between these things and try to ... hold yourself together."

The Music of 'Magic'

Stephen Sondheim and Leonard Bernstein both passed on the chance — Sondheim said 'Streetcar' was operatic enough in its original form — but conductor and composer Andre Previn finally set Streetcar to music in 1998.

Soprano Renee Fleming, who created the role of Blanche in the opera's world premiere, sings the character's signature aria.

A Survivor, Even After She's Surrendered

For Glenn Close, the key to Blanche is her strength. Underneath it all, says Close, Blanche is a survivor.

"She is not physically strong anymore, and she is certainly emotionally and psychologically fragile, but she's not giving up," Close says. "She just doesn't give up."

Blanche fights to the very end, in fact — threatening Stanley with a broken bottle once it's clear how much damage he's done her.

"I found that very moving, and a very important aspect of the character," Close says.

Strong as she may be, Blanche DuBois is ultimately no match for the brute strength of Stanley Kowalski. And when her own sister refuses to believe the one ugliness she doesn't try to conceal — that Stanley has raped her — the delicate, mothlike Blanche is finally broken. She suffers a nervous breakdown, and is taken away, presumably to a mental hospital.

Truly indelible characters turn up in the oddest places. Here, Homer Simpson explains to his wife Marge why her performance as Blanche DuBois — in a community-theater musical version of Streetcar — struck home.

Close says that even then, in the final moments of Tennessee Williams' play, she was determined to show Blanche's inner strength.

"It seemed right to me that when she is kind of lifted out at the end by the doctor, being taken off to whatever asylum she is going to end up in, that you see her putting herself back together enough to leave with a sense of dignity," Close says. "Because she has spent so much energy keeping herself together."

And so when Blanche holds onto the arm of the doctor who is taking her away — when she tells him she has "always depended on the kindness of strangers" — she turns her own tragedy into an unexpected moment of grace.