Accessibility links
Survey: 'What a Billion Muslims Really Think' Dalia Mogahed, co-author of Who Speaks for Islam? talks about how Muslims view democracy, women's rights and radicalism. The book presents the findings of a six-year, 50,000-interview Gallup survey of Muslim populations worldwide. 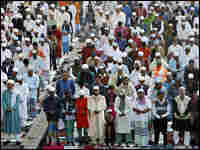 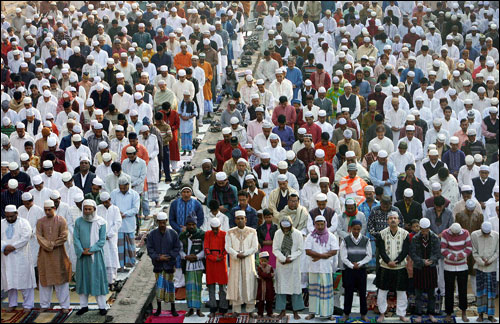 Muslim men take part in a special morning prayer in Dhaka, Bangladesh. A new book presents the findings of a six-year, 50,000-interview Gallup survey of Muslim populations in 35 countries.

'Who Speaks for Islam? What a Billion Muslims Really Think'

Talk about the Gallup poll's findings on Blog of the Nation.

When the Gallup organization asked Muslims around the world and Westerners what they admired most and least about the West, both groups gave the same answers: They admired Western technology and democracy, but were disappointed by the breakdown of family values and morality.

Who Speaks for Islam? What a Billion Muslims Really Think is a book that presents the findings of a six-year, 50,000-interview Gallup survey of Muslim populations in 35 countries.

Dalia Mogahed, co-author of Who Speaks for Islam?, discusses what the survey concludes about how Muslims view democracy, women's rights and radicalism. The poll posed some tough questions:

Is Islam to blame for terrorism?
Why is there so much anti-Americanism in the Muslim world?
Who are the extremists?
Where are the moderates?
What do Muslim women really want?

Dalia Mogahed talks with guest host Ari Shapiro and callers about the findings of the comprehensive study.

Excerpt: 'Who Speaks for Islam?' 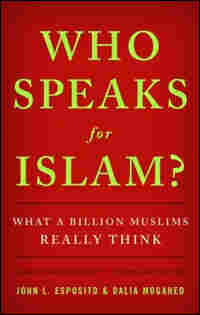 What many saw as an ongoing conflict between the United States and parts of the Muslim world intensified dramatically after the horrific events of 9/11. Violence has grown exponentially as Muslims and non-Muslims alike continue to be victims of global terrorism. Terrorist attacks have occurred from Morocco to Indonesia and from Madrid to London, and wars in Afghanistan and Iraq rage on. As of this writing, war and terrorism have claimed hundreds of thousands of lives since 9/11; the vast majority of victims have been civilians.

As we cope with savage actions in a world that seems ever more dangerous and out of control, we are inundated with analysis from terrorism experts and pundits who blame the religion of Islam for global terrorism. At the same time, terrorist groups such as al-Qaeda beam messages throughout the world that demonize the West as the enemy of Islam and hold it responsible for all the ills of the Muslim world.

Amid the rhetoric of hate and growing violence, manifest in both anti-Americanism in the Muslim world and in Islamophobia in the West, discrimination against, or hostility toward, Islam or Muslims has massively increased. In the aftermath of 9/11, President George W. Bush emphasized that America was waging a war against terrorism, not against Islam. However, the continued acts of a terrorist minority, statements by preachers of hate (Muslim and Christian alike), anti-Muslim and anti-West talk show hosts, and political commentators have inflamed emotions and distorted views.

The religion of Islam and the mainstream Muslim majority have been conflated with the beliefs and actions of an extremist minority. For example, a 2006 USA Today/Gallup poll found that substantial minorities of Americans admit to harboring at least some prejudice against Muslims and favoring heightened security measures for Muslims as a way to help prevent terrorism. The same poll found 44% of Americans saying that

Muslims are too extreme in their religious beliefs. Nearly onequarter of Americans, 22%, say they would not want a Muslim as a neighbor; less than half believe U.S. Muslims are loyal to the United States.

Are the negative perceptions and growing violence on all sides only a prelude to an inevitable all-out war between the West and 1.3 billion Muslims? The vital missing piece among the many voices weighing in on this question is the actual views of everyday Muslims. With all that is at stake for the West and Muslim societies — indeed for the world's future — it is time to democratize the debate.

Who Speaks for Islam?: What a Billion Muslims Really Think is about this silenced majority. This book is the product of a mammoth, multiyear Gallup research study. Between 2001 and 2007, Gallup conducted tens of thousands of hour-long, face-to-face interviews with residents of more than 35 nations that are predominantly Muslim or have substantial Muslim populations. The sample represents residents young and old, educated and illiterate, female and male, and from urban and rural settings. With the random sampling method that Gallup used, results are statistically valid within a plus or minus 3-point margin of error. In totality, we surveyed a sample representing more than 90% of the world's 1.3 billion Muslims, making this the largest, most comprehensive study of contemporary Muslims ever done.

After collecting vast amounts of data representing the views of the world's Muslims, we pored through that data for answers to the questions everyone is asking: What is the root of anti- Americanism in the Muslim world? Who are the extremists? Do Muslims desire democracy, and if so, what might it look like? What do Muslim women really want? The concept of this book is simple: With these questions in hand, we let the statistical evidence — the voices of a billion Muslims, not individual "experts" or "extremists" — dictate the answers.

Gallup's research produced a number of insights, but the most important was this: The conflict between the Muslim and Western communities is far from inevitable. It is more about policy than principles. However, until and unless decision makers listen directly to the people and gain an accurate understanding of this conflict, extremists on all sides will continue to gain ground.

The study revealed far more than what we could possibly cover in one book, so we chose the most significant, and at times, surprising conclusions to share with you. Here are just some of those counterintuitive discoveries:

Who speaks for the West?: Muslims around the world do not see the West as monolithic. They criticize or celebrate countries based on their politics, not based on their culture or religion.

Dream jobs: When asked to describe their dreams for the future, Muslims don't mention fighting in a jihad, but rather getting a better job.

Radical rejection: Muslims and Americans are equally likely to reject attacks on civilians as morally unjustified.

Religious moderates: Those who condone acts of terrorism are a minority and are no more likely to be religious than the rest of the population.

Admiration of the West: What Muslims around the world say they most admire about the West is its technology and its democracy — the same two top responses given by Americans when asked the same question.

Critique of the West: What Muslims around the world say they least admire about the West is its perceived moral decay and breakdown of traditional values — the same responses given by Americans when posed the same question.

R.E.S.P.E.C.T.: Muslims around the world say that the one thing the West can do to improve relations with their societies is to moderate their views toward Muslims and respect Islam.

Clerics and constitutions: The majority of those surveyed want religious leaders to have no direct role in crafting a constitution, yet favor religious law as a source of legislation.

Excerpted from Who Speaks for Islam?: What a Billion Muslims Think by John Esposito and Dalia Mogahed, ©2008 Gallup Press. Reprinted by permission of the publisher. 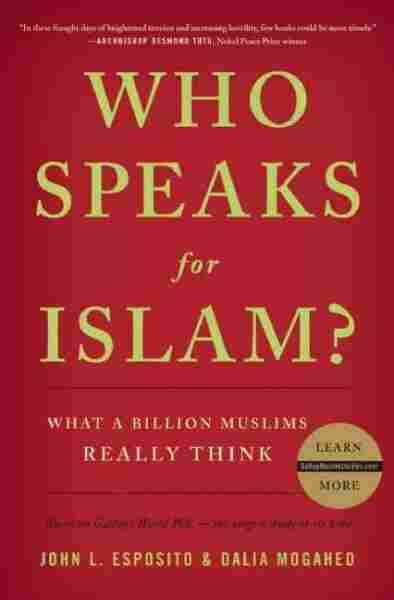 Who Speaks for Islam?

What a Billion Muslims Really Think