Accessibility links
Italian Tenor Giuseppe Di Stefano Dies at 86 Di Stefano was known for his thrilling Italianate voice and his successful collaborations with soprano Maria Callas. The retired tenor had been brutally attacked in 2004, and never recovered.

Hear recordings of tenor Giuseppe Di Stefano at the peak of his career. 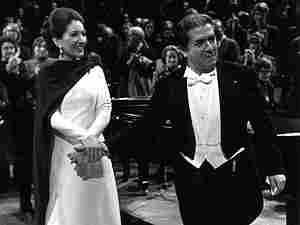 The operatic world has lost one of its great tenors. Giuseppe Di Stefano, who was known for his robust Italian sound and his collaborations with famed soprano Maria Callas, died Monday at his home outside Milan, Italy. He was 86.

In the 1950s, when there was no shortage of fine Italian tenors, Di Stefano stood out with a voice that radiated Italian sunshine.

The Sicilian-born tenor's career was sparked after a friend heard him sing a folk song and told Di Stefano that he would be a natural on the opera stage. Di Stefano was drafted into Mussolini's army but later fled to Switzerland where he made his first recordings in 1944.

Di Stefano's operatic debut came in 1946, in the Italian city of Reggio Emilia, as Des Grieux in Massenet's Manon. By the early 1950s, he was routinely paired with superstar Maria Callas. The natural warmth in Di Stefano's voice contrasted brilliantly with Callas. Together, their recording of Puccini's Tosca has been acclaimed by critics as a classic.

Critic John Steane, in his book The Grand Tradition, praised Di Stefano's fine control and intelligent phrasing, calling the instrument "one of the best tenor voices of the century."

But too quickly in his career, Di Stefano added heavier roles to his repertoire, and as a result the voice grew rougher. In 1963, he inadvertently helped launch Luciano Pavarotti's career by dropping out of a London performance, giving the younger tenor his first big break.

Di Stefano had been in a coma and disabled after a vicious attack by unknown assailants at his villa in Kenya in 2004. Officials from La Scala opera house, where Di Stefano sang 185 times, released a statement reading, "Another great of the 'Scala family' enters into the history of opera, into its myth. He enjoyed a long, passionate run, full of friends and memorable events."