Accessibility links
In a Jerusalem Suburb, Jewish Cultures Clash In Jerusalem, more ultra-Orthodox Jews are leaving their cloistered neighborhoods for cheaper housing in the suburbs. In one suburb, that has led to rising tensions and sporadic violence with their modern Orthodox and secular neighbors. 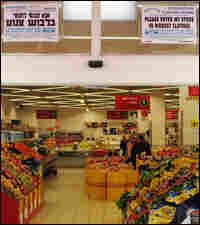 Signs requesting customers to dress modestly are posted on the door of a supermarket in Beit Shemesh. Eric Westervelt, NPR hide caption 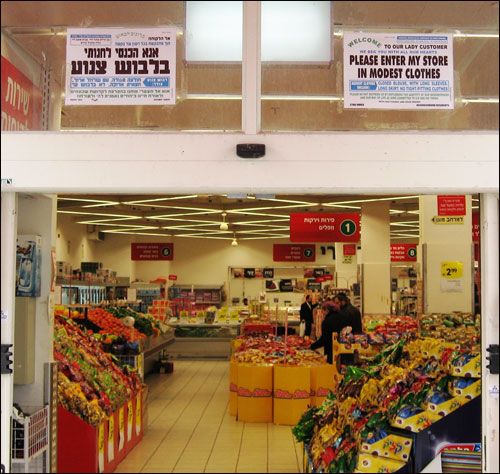 Signs requesting customers to dress modestly are posted on the door of a supermarket in Beit Shemesh. 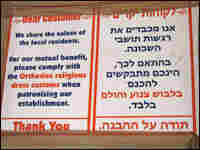 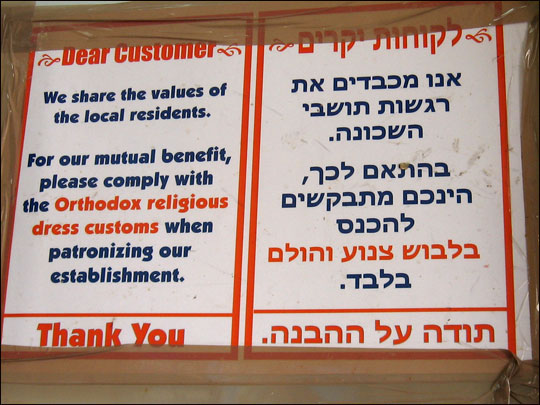 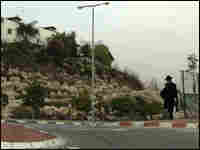 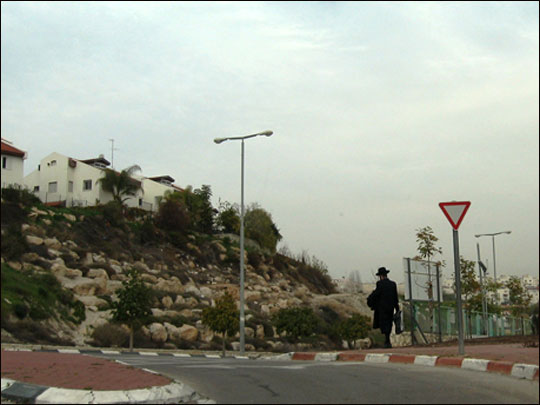 An ultra-Orthodox man walks down the street in Beit Shemesh.

In Jerusalem, more ultra-Orthodox Jews, or Harediim, are leaving their cloistered neighborhoods for cheaper housing in the suburbs. In one suburb, that has led to rising tensions and sporadic violence with their modern Orthodox and secular neighbors.

A small group of ultra-Orthodox extremists has been intimidating fellow Jews who they deem to be not kosher or modest enough, or who don't keep the Sabbath the way they want them to.

One resident of the sprawling, quiet suburb of Ramat Beit Shemesh, a half-hour outside of Jerusalem, is Solly Wahlbe, an ultra-Orthodox Jew who spends his days studying the Torah.

In an outdoor shopping area near a local supermarket, the slight 18-year-old says he approves of the big signs posted everywhere around by his fellow ultra-Orthodox, which implore women to dress modestly.

Women wearing jeans or pants, Wahlbe says, are a distraction to what he calls "the focused, settled minds" of the Harediim.

Or, he says softly, "into the head of a married man. ... We're not trying to change people," he says, "but they must respect our way of life."

The problem is that Wahlbe is in a public shopping center in a mixed suburb where Harediim make up a little more than a quarter of the population. A minority of ultra-Orthodox have tried to impose "respect" using rocks, fists and intimidation.

Dr. Hahvah is a modern Orthodox woman who dresses modestly, keeps kosher and observes the Sabbath. One day driving home, she saw that someone had put up a sign in her neighborhood that read "Don't pass here unless you dress modestly."

"I find that offensive," she says. "I don't think that anybody should impose dress codes on the public."

When she tried to haul the sign down, some ultra-Orthodox pelted her and her car with rocks. Dr. Hahvah, who asked that her full name not be used, went to the local police, but she says they did nothing.

"It's very hard. I know the people who attacked me and when their families come to see me as a doctor and I can't say anything or do anything because it's unprofessional," she says.

That rock attack was hardly an isolated incident. People driving on the Sabbath have been bombarded with rocks. Earlier this year in Beit Shemesh, a young Haredi woman was sitting next an Israeli soldier on a public bus when ultra-Orthodox men assaulted both of them and forced the woman off the bus. Men and women, they said, should be segregated. Later, an ultra-Orthodox man who stood up to the zealots within his own community was himself brutally beaten. He said it was like a pogrom.

'If They Want to Be Tough, We'll Be Tough'

"One of the problems with this group of violent fanatics, I would call them, is that they don't know how to handle when they have a disagreement," says Shalom Lerner, the deputy mayor of Beit Shemesh.

The deputy mayor says some Harediim have felt estranged as rising costs and overcrowding have forced more and more of them out of their sheltered neighborhood, Mea Shariim, in the heart of Jerusalem, and into the suburbs.

Lerner, an observant, modern Orthodox, says Beit Shemesh leaders said enough is enough after some businesses received mafia-like threats to put up modesty signs — or else. Then a family whose television was allegedly visible through a window got a threatening letter demanding they cover it up or face attack. Lerner says the town made it clear to the ultra-Orthodox that there will be big legal, financial and political costs if the threats, bullying and violence continue.

"If it's a school they want, the school will be the last one to get allocation," he says. "It won't be where they want. We won't give them any financial help. If they want to be tough, we'll be tough."

Last summer, community members started a group that's trying to narrow the religious and cultural divide through dialogue. Organizers say they have made some progress, but both sides acknowledge the goal of the dialogue, in the end, is not wider integration but a kind of peaceful segregation.