Accessibility links
'Color Field' Artists Found a Different Way Starting in the 1950s, a group of artists found new ways to create colorful, abstract works known as "color field" painting. They rarely used paint brushes and one of them couldn't even draw. A new exhibit celebrates their tradition-breaking techniques. 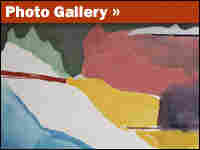 Helen Frankenthaler's "Off White Square," 1973, is part of the "Color as Field" exhibit at the Smithsonian American Art Museum in Washington, D.C. Courtesy American Federation of Arts hide caption 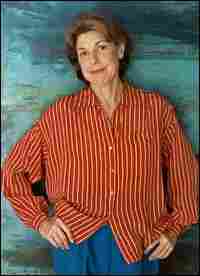 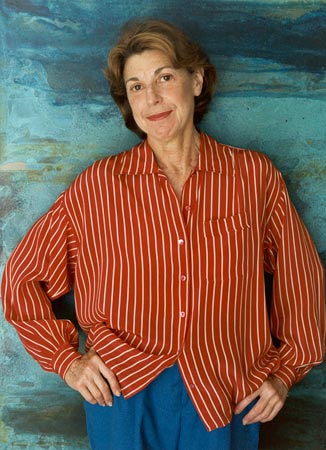 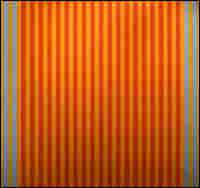 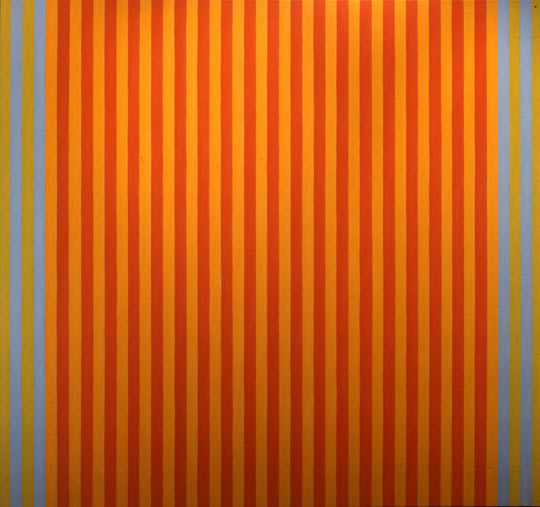 Washington, D.C., is known for many things, but launching an art movement is not one of them. Still, starting in the 1950s, the federal city was a cradle for a group of artists who produced colorful, abstract, even joyful works. One art critic dubbed them "color field" painters. An exhibition of 39 of their works just went on view at the Smithsonian American Art Museum.

These artists had amazing, tradition-breaking techniques. They rarely used paint brushes. They didn't prime their huge canvases before putting on their paint. And some of them — like Gene Davis — couldn't even draw. He was a sportswriter, then went on to report on Presidents Franklin Roosevelt and Harry Truman. Yet Davis always wanted to make art.

"But he was in his 40s and he said, 'I'm much too old to learn to draw. I know how hard it is. So I am going to simply going to paint stripes,'" says Betsy Broun, director of the Smithsonian American Art Museum.

And so, Broun says, without doing a single drawing, Davis striped his way onto the walls of museums around the world. Using what looks to be a very long ruler, Davis set down a series of strictly drawn straight lines, and painted various vivid colors inside those lines.

His main interest was color — what it could express, without representing anything. No apples, chairs or torsos. Just stripes of bright color.

"He said, 'I play by eye in the same way that a jazz musician plays by ear,' Broun says. "These are artists who came along very much in a postwar mood. The economy was doing well, the nation was all recovering and bouncing back."

Broun says the color field pioneers — Davis, Morris Louis, Kenneth Noland and Sam Gilliam among them — reflected the upbeat spirit of the 1950s and early '60s ... the stability of the Eisenhower years, the youthful possibilities of JFK.

"There is a kind of celebratory quality to a lot of these works," Broun says. "There was recently a Morris Louis show and a scholar named Alex Nemerov said, 'he looks like court painter to John F. Kennedy.'"

Their artistic inspiration was New York painter Helen Frankenthaler. Her pictures reacted to the ropey, anxious canvases of abstract expressionism.

"She was looking for a different way to get a more luminous quality in her painting," Broun says.

Frankenthaler was influenced by Jackson Pollock. She knew him, and watched him work in the early 1950s. She saw him put his canvases flat on the floor, and then rope and lasso skeins of enamel paint onto them.

"What I took from that was the gesture and the attitude and the floor working," Frankenthaler said in a 1988 NPR interview. "But I wanted to work with shapes in a very different way. And instead of being involved in his technique, what evolved for me out of my needs and invention had to do with pouring paint, and staining paint."

To do that, Frankenthaler diluted her paint, thinning it out so it melted into the weave of the canvas and became the canvas. And the canvas became the painting.

Two young Washington artists — Noland and Louis — rode a train up to Manhattan to visit an art critic friend named Clement Greenberg. He was Frankenthaler's lover at the time, and took the D.C. painters to her studio. There they saw her massive1952 work, "Mountains and Sea" — tinted with buckets of fast-drying, thinned out acrylic paint that she poured and dribbled and pooled onto unprimed canvas.

Smithsonian curator Joanna Marsh says it was a life-changing experience. The men went home to Washington and started to pour. Morris Louis did, anyway. Kenneth Noland was more symmetrical, sometimes straight-edged and geometric, with wonderful colors, put on flat — sometimes with a brush — in abstract shapes. Louis was freer, with radiant colors soaked into the canvas in light, translucent veils.

"Louis worked in his dining room in his home," Marsh says. "It was a very small space and he was quite secretive about his process. He didn't allow people to come in to see him while he was working."

Sometimes Louis' work was a secret to himself. For a series he called "Unfurled," made on wide, wide canvases, his small studio became a real issue.

"He had to work piecemeal," Marsh says. "He never saw the entire canvas, because the space was so confined. So he would work on one section, for instance the left side, and then he would move over to the right side of the canvas, but not be able to see what he had just done on the left."

In a way, that determination to "make it new" defined the art of all of the color field painters. Now their bright and shining new ideas can be seen at the Smithsonian American Art Museum in Washington through May 26. The exhibition is called "Color as Field: American Painting, 1950-1975." It was organized by Karen Wilkin for the American Federation of Arts.