Accessibility links
India Beckons Indian-Americans Back with Jobs For second-generation Indian Americans, returning to their parents' home country can be a cultural odyssey. As the Indian economy booms, however, there are other reasons to return to their roots. The country that many of their parents fled for lack of opportunity now needs their skills. 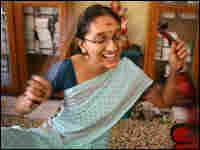 Preetha Narayanan arrived in India on a Fulbright Scholarship to study classical Indian violin. She says that studying under a guru there has changed her approach to music. Scott Carney for NPR hide caption 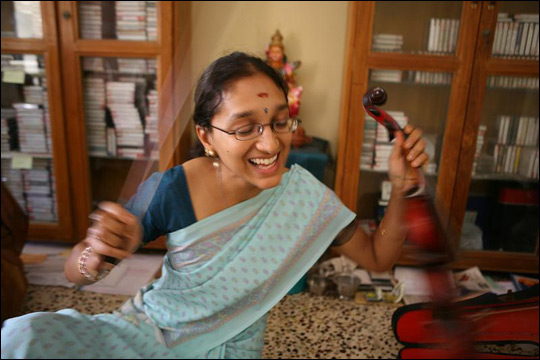 Preetha Narayanan arrived in India on a Fulbright Scholarship to study classical Indian violin. She says that studying under a guru there has changed her approach to music. 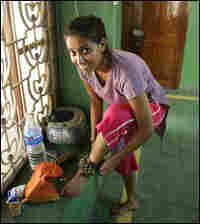 Over the past few years, classical Indian dancer Mythili Prakash has gained a reputation for grace and technical skill. Even after being accepted by the dance world, however, her California accent sometimes puts off the audience. Scott Carney for NPR hide caption 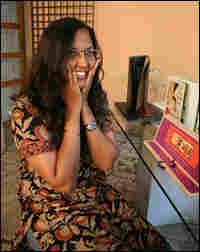 Author Nina McConigley sits in the courtyard of Tara Books, an independent publishing house that courts staff from the West. Her upcoming book Cowboys and East Indians explores what it means to be an Indian in the American West. Scott Carney for NPR hide caption

For second-generation Indian Americans, returning to their parents' home country can be a cultural odyssey. As the Indian economy booms, however, there are other reasons for American-born Indians to return to their roots. The country that many of their parents fled for lack of opportunity now needs their skills.

In 2006, the Indian government created a new immigration card for what it calls OCI or "Overseas Citizens of India." With it, second-generation Indians can have visa-free entry for life. Since 2006, the government has issued more than 200,000 OCI cards.

The Indian government isn't trying to lure back the second generation for sentimental reasons — it needs their skills, explains S. Mitra Kalita, the Brooklyn-born author of a book about Indian immigration.

"The irony is that India is a country of a billion people, but any manager will tell you that the labor pool that they are faced with is not as educated and experienced as they need to be. These second-generation migrants do a great job straddling both worlds."

"Because we can cross those cultural boundaries, there will be opportunities for us that may not exist for the person who is coming straight from a foreign culture," she says.

Though she began her violin career learning Bach and Beethoven, Narayanan now studies classical Indian music under a guru. A small bruise under her chin — a signal of constant practice — emphasizes the seriousness of her mission.

"In this country, when you take on an art, you aren't just taking on the art, but the whole background behind the art," she says.

Writer Nina McConigley, who works at a publishing house in Chennai, also sees opportunity to develop her craft in India that she didn't back home.

"I wouldn't have published a book if I had been in the U.S.," she says, referring to a children's book she authored.

Having grown up in Wyoming feeling like an outsider, she's found a sense of belonging in India, she says.

"I grew up in a place where I never saw a reflection of myself. I was the only non-white kid besides my sister in almost all my schooling. I wanted to live somewhere I wasn't in the minority. This is the first time in my life, and I'm 32 years old."

Fitting in isn't a fluid process, however. Some second-generation Indians find that being American gets them in trouble.

On the stage in her heavy makeup, ankle bells and a theatrical bridal costume, Mythili Prakash looks every inch the renowned classical Indian dancer that she is. When she opens her mouth, however, questions arise.

"When I introduce my items with an American accent or if I'm saying things a little bit more American than Indian," suddenly her image changes, she says. "In a lot of articles that have been written about me, or even reviews, my American accent has been mentioned."

As in the United States, signs of being foreign can make it difficult to connect with people socially.

McConigley also recalls the moment when she realized that her American identity was inhibiting relationships.

"I became friends with someone through work who was Indian, around my age, and I was kind of excited," she says. A few days after the author invited her "friend" to Thanksgiving dinner, however, she discovered that the woman had published a blog entry making fun of the event and calling her prayers trite.

"It was strange to see me be mocked for being American on the blog when I really felt that I was, I guess, Indian."

More than just a personal attack, McConigley felt that her friend had undermined her very reasons for returning to India.

Ultimately though, she and her immigrant peers agree that India is increasingly becoming a land of possibility.

"We saw our parents migrate to the United States to follow opportunity," Kalita explains. "In the new world order, if you will, it is really hard to dispute that there is plenty of opportunity in India."