Hear an interview and performance from WBGO

Jason Lindner: The Sound of 'Now'

Jason Lindner: The Sound of 'Now'

Hear an interview and performance from WBGO 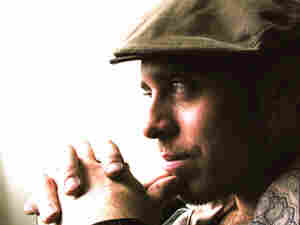 WBGO is rarely in the business of "breaking" a band. However, this is the first studio recording of Now vs. Now, pianist Jason Lindner's newest project. So consider this the beginning of the hype machine.

I've always been fascinated by Lindner's musical omniverse. He's a member of Me'Shell NdegeOcello's band. He's the music director and pianist for singer Claudia Acuña. He's led one of New York's most creative big bands for more than a decade. And he heads a few more ensembles, each with its own sound and logic.

Now vs. Now is the newest of Lindner's projects. It's so new that there's no record deal, no official press photos, no official "branding." No matter.

"Big Pump Song" offers an odd-tempo groove with poetics from Baba Israel, and it sets the tempo for the session.

I'm partial to the last section of "Schlafkar," a song about subterranean train traveling. Before we reach the last stop on the train, it's a fairly rocky ride. "Pretty Three" features bassist Panagiotis Andreou, who vocalizes in a style reminiscent of the Byzantine music in his native Greece. The group closes with "Beatbox for 'BGO," a freestyle romp with mad skillz, as the youngsters might say. (Insert devious smile here.)

I'm not sure I want to describe the music as much as I want to invite people to listen to it. Because this is the sound of New York City — poetry and hip-hop from the streets, a ride on the D train going express to the Bronx, the tension and release of a cosmopolitan society where people of all shades live together: the sound of now.