Accessibility links
Bruce Springsteen, on a 'Magic' Campaign As presidential candidates deliver their messages across the nation, the author of "Born in the U.S.A." and "The Rising" is traveling the country delivering one of his own. The touring rocker talks about mixing music and politics. 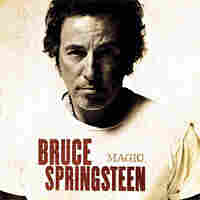 Bruce Springsteen, on how songs change over time 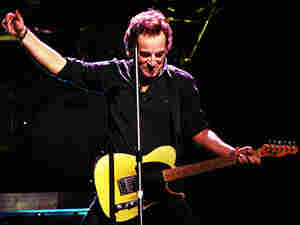 As presidential candidates deliver their messages across the nation, Bruce Springsteen is traveling the country delivering his.

Springsteen and his E Street Band just resumed a tour for their latest album, Magic. Since the band last performed a few months ago, the presidential field has narrowed from many candidates to a few.

The author of "Born in the U.S.A." and "The Rising" performed last week in Hartford, Conn. He also sat down to talk with Steve Inskeep about mixing music and politics.

Which Springsteen was, in 2004. He campaigned for Democrat John Kerry, who lost. The song "Last to Die" on Springsteen's new album refers to a 1971 quotation from the Vietnam veteran: "How do you ask a man to be the last to die for a mistake?"

At 58, Springsteen still swings around the microphone stand like a gymnast on a sawhorse. Backstage, he sits on the edge of a couch. He keeps his hands on the seat behind him. He doesn't always make eye contact. So he seems almost shy as he talks about the politics in his music.

"It's a tricky bit of business because for me the song has to have a life both outside of its political context and at the same time contain your politics," Springsteen says. "Otherwise, you're stuck with a headline, or you're stuck on a soap box. And there are times for that, but for me, I want the music to have a variety of lives."

Springsteen has written songs about a variety of characters, many deeply troubled. But those characters are also often oppressed by circumstances beyond their control.

"I guess it was just a story I learned early on, that I told well, you know?" Springsteen says. "I was drawn to those specific questions, I think probably because of the way I grew up, because I could feel these forces."

The difficulty of his parents' lives, Springsteen says, was a major influence on his outlook.

"My father struggled very hard to sustain a job and to hold on to work," he says. "And they both barely scraped by. I always remember my mother — we had a finance company that was like 100 yards from our house. ... My mother would go in March, and she would borrow until the summer, then she would pay off, and when she got it paid off, she would go and borrow again, and it would get us through the next. It was this constant cycle of financial struggle."

In the song "Long Walk Home," from Magic, a father speaks to his son: "Your flag flyin' over the courthouse / means certain things are set in stone / Who we are, what we'll do, and what we won't," Springsteen sings. The song is ostensibly about returning to one's hometown but is also a commentary on American civil liberties.

"If you look back through the last six years, you see what's happening," Springsteen says. "I don't need to spiel through the litany — no habeas corpus, the curtailing of civil rights — you realize how easy it is for those ideals to be subverted.

"So the idea was: That guy is trying to talk to his son and say, 'Look, there are these things that are supposed to be sacred. And they make us who we are. And they direct us and guide us in what we do.' Those things are important to remember, never more so than when the country is under stress and when times are hard. And that's where we are right now."