Accessibility links
Radio Lab: Into the Brain of a Liar We all lie — once a day or so, according to most studies. But a few of us make a habit of it. Researchers have found evidence of structural differences in the brains of people with a history of persistent lying.

Listen
Radio Lab: Into the Brain of a Liar 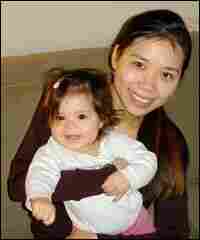 Researcher Yaling Yang at home with her daughter, Zoe. "Every step, every little noise she makes, it makes me wonder what's going on in her brain," Yang says. Jake Rofman for NPR hide caption 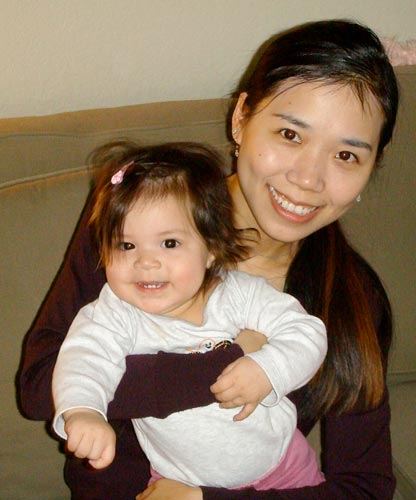 Researcher Yaling Yang at home with her daughter, Zoe. "Every step, every little noise she makes, it makes me wonder what's going on in her brain," Yang says.

We all lie — once a day or so, according to most studies. But usually we tell little lies, like "your new haircut looks great!" And most of us can control when we lie or what we lie about. But some people lie repeatedly and compulsively, about things both big and small.

In 2005, a study published in The British Journal of Psychiatry provided the first evidence of structural differences in the brains of people with a history of persistent lying. The study was led by Yaling Yang, a doctoral student in psychology at the University of Southern California, and Adrian Raine, an expert on antisocial disorders who is now at University of Pennsylvania.

They expected to see some kind of deficit in the brains of these liars, Yang says. But surprisingly, the liars in their study actually had a surplus — specifically, they had more connections in the part of their brains responsible for complex thinking.

The label "pathological liar" gets used in a variety of ways, and there's no standard psychological definition or test to measure if someone is a pathological liar. So Yang and her team chose to focus their study on people who have a history of repeated lying and seem not to be able to control their lying (hereafter called simply, "liars"). The researchers began by gathering volunteers from temporary employment agencies in the Los Angeles area. The idea was that liars would be over-represented at these agencies; a history of repeated lying would likely make it hard to keep a steady job.

Then they ran 108 volunteers through extensive interviews and a battery of tests that measure patterns of deception. In the end, the team found 12 people who showed strong evidence of repeated and compulsive lying. For control groups, they identified 16 people who had antisocial tendencies but no history of lying and 21 people with no history of either lying or antisocial behavior.

Yang and her colleagues put all 49 people, both the liars and the non-liars, into a magnetic resonance imaging scanner and took pictures of their prefrontal cortex. They chose to focus on this area of the brain because previous studies had shown that the prefrontal cortex plays a role in both lying and in antisocial behaviors.

If you could look into this part of the brain, which sits right behind your forehead, you would see two kinds of matter: gray and white. Gray matter is the groups of brain cells that process information. Most neuroscience studies focus on gray matter. But nearly half the brain is composed of connective tissues that carry electrical signals from one group of neurons to another. This is white matter. Roughly, gray matter is where the processing happens, and white matter connects different parts of the brain, helping us to bring different ideas together.

The liars in Yang's study had on average 22 percent to 26 percent more white matter in their prefrontal cortex than both the normal and antisocial controls.

Yang speculates that the increase in white matter means that people who lie repeatedly and compulsively are better at making connections between thoughts that aren't connected in reality — like, say, "me" and "fighter pilot." Consequently, while some of us struggle to come up with reasons why we were late for work, or can't go out with someone we don't really like, Yang's liars impulsively serve up a heaping helping of excuses and stories, and fast.

"By having more connections," Yang says, "you can jump from one idea to another and you can come up with more random stories and ideas."

Admittedly, this study is just a first step. It doesn't show that more white matter in the prefrontal cortex accounts for all lying or that it's the only part of the brain involved. And the study does not establish whether the brain differences lead to lying or whether repeated lying somehow "exercises" connections in the brain. While the study was carefully designed to exclude differences that could be due to age, ethnicity, IQ, brain injury or substance abuse, the small sample size means the results need to be replicated. More research is needed to define what behaviors count as pathological lying and to establish the mechanism behind those behaviors.

Still, the study provides a promising starting point for exploring the relationship between lying and white matter in the brain. For example, brain scans of autistic people, who have difficulty telling lies, show the exact opposite profile of Yang's liars: They have less white matter than other people. In autistic children, white matter doesn't develop at a normal rate.

"For normal people, from age 2 to age 10 there is a big jump in their white matter," says Yang, "and actually that's the same age that they develop the skill to lie."

Yang has good reason to be thinking about the development of young brains: She's a new mom. She's on maternity leave keeping a close eye on her daughter, Zoe.

Soren Wheeler contributed to this report.