Accessibility links
Vampire Weekend's Debut Worth the Hype The New York band is enjoying the kind of buzz that most young musicians only dream of. It's just released its debut, and it's already been featured in The New York Times — and is about to appear on Saturday Night Live. The album is, surprisingly, worth the hype. 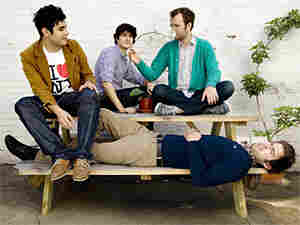 The New York band Vampire Weekend is enjoying the kind of buzz that most young musicians only dream of. The group just released its self-titled debut CD, yet it's already drawn nearly a million and a half visitors to its MySpace page, been featured in the Style section of The New York Times, and performed on Late Night with David Letterman. Surprisingly, the band's music is worth the hype.

Vampire Weekend's members got together in 2006 as students at Columbia University. Crafting songs with meticulous arrangements and infusing them with high-energy performances, they sound indefatigable, clever and exceedingly musically skilled. Branding itself with the tag "Upper West Side Soweto," the band does a reverse Paul Simon, bringing African influences into its world. Vampire Weekend has devoured Afro-pop, English ska, and punk as though those genres were great literary works, and this CD is its final exam.

Much has been made of Vampire Weekend's socioeconomic and Ivy League status, which is reasonable considering that both inform what its members do as artists. While their music slips in and out of rhythms from around the world, the musicians themselves literally wear their own culture on their sleeves, dressing in unapologetically and non-ironically preppy garb. Their lyrics provide a virtual tour of the life and education of the young and privileged, gleefully bounding from Cape Cod to campus, from sophistic grammatical references to the finer points of Beaux Arts architecture.

Sure, Vampire Weekend is effete, but it's ultimately charming. While its members clearly revel in their fortunate world, their name-dropping never gets too obnoxious, and it never obscures the emotional content of their songs. They make sense of how the thrill you get from seeing your crush walk to class is just about the same as discovering an obscure band that changes everything you thought about music.

If you long for the days when you were an annoyingly well-read, hyper-energetic college kid who geeked out over music and pop-culture trivia — or if you were never any of those things, but always wondered what it would feel like — this CD will feel as comfortable to you as a well-worn Ralph Lauren cardigan.