Accessibility links
A Cuban Conga Master's Definitive Rumba The death of Cuban conga master Carlos "Patato" Valdes this past December provides a sad opportunity to dig out one of his best-known recordings. In 1968, Patato recorded a towering rumba recording, with what's essentially an Afro-Cuban supergroup. 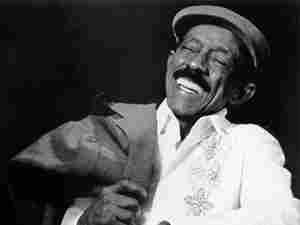 Carlos "Patato" Valdes, who died in December, made some of the world's finest Afro-Cuban music. Martin Cohen hide caption

The death of Cuban conga master Carlos "Patato" Valdes this past December provides a sad opportunity to dig out one of his best-known recordings — which also happens to be a groundbreaking piece of Afro-Cuban music. In 1968, Patato recorded what many say is the definitive rumba recording, with what's essentially an Afro-Cuban supergroup.

Forget about the swanky big-band rhumba (with an h) popularized by Latin society bands with ruffled sleeves — Xavier Cugat, for example. Traditional rumba came from Cuban solares: working-class neighborhoods where the African influence on Cuban music was most evident.

Patato & Totico featured bassist Israel "Cachao" Lopez, who was an early Afro-Cuban pioneer, and Arsenio Rodriguez, a blind musician celebrated for giving traditional Cuban music a funky urban feel, as well as for making a folkloric instrument (the tres, a six-stringed Cuban guitar) sing with jazz inflections. Totico was another name for Eugenio Arango, Patato's childhood friend, who was a respected rumba singer.

Lyrically, "Ingrato Corazon" (Ungrateful Heart) is typical of street rumba's topical nature. It's a lament, as well as the sort of warning call — "Watch out for her, she'll do you wrong" — often heard in blues and pop music. The song's guaguanco rhythm is again typical of the genre: a pulse-like beat driving the song forward, a soloist on the quinto (high-pitched conga) riffing, a lead vocal and chorus that re-creates the call-and-response format of traditional African music. The joy of the cut lies in the interplay between the drums, the bass and tres riffs that mirror the melody and rhythm, the doo-wop influence of the vocals, and Patato's own powerful soloing.

Patato & Totico marks the only time Carlos "Patato" Valdes, Arsenio Rodriguez, and Israel "Cachao" Lopez ever played together. It was re-mastered and reissued last year, much to the delight of Afro-Cuban music fans around the world. The cut, and the entire album, provides a powerful reminder of the diminutive drummer's enormous contributions to Afro-Cuban music and jazz.