Accessibility links
Outlook for Oceans Bleak as Sea 'Deserts' Grow The region of the ocean with little plant life is known as "the desert of the sea." It's dramatically expanding, scientists say, and warmer oceans may be to blame. 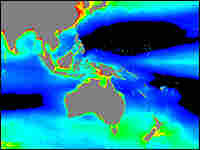 A new study reveals the extent of the "desert of the sea," shown here in black. These are regions where little to no plant life is observed. NOAA hide caption

A new study reveals the extent of the "desert of the sea," shown here in black, where plant life is the lowest. This image is an average of ocean chlorophyll over the study's nine-year period.

The region of the ocean known as "the desert of the sea" has expanded dramatically over the past decade, according to a new study. Scientists looking at the color of the ocean from space have found that vast areas that were once green with plankton have been turning blue, as marine life becomes scarcer. If it's linked to global warming, as they suspect, this could be another blow for the world's fisheries.

Just as plants make up the base of the food web on land, tiny green phytoplankton in the ocean are a critical foodstuff for life in the oceans. And Jeff Polovina, at a National Marine Fisheries Service lab in Hawaii, has been watching by satellite as that greenery in the middle of the ocean is fading away.

"The regions that are showing the lowest amount of plant life, which [are] sometimes referred to as the biological deserts of the ocean, are growing at roughly 1 to 4 percent per year," Polovina says.

One to 4 percent may not sound like all that much, but these regions are huge to begin with. So this marine desert has grown by 2.5 million square miles in the past decade. That's an area the size of Texas every year. Polovina makes the analogy to deserts on land, creeping into more productive environments.

And it seems to be tied to global warming. Polovina's study, published in Geophysical Research Letters, finds that the areas of low productivity are expanding in lockstep with increasing water temperatures. As surface temperatures warm, that prevents colder water from rising up from the depths. And that colder water carries the nutrients that would feed the algae.

Scientists studying climate change have predicted this kind of change. But the sea desert has been spreading 10 times faster than climate scientists predicted. So Polovina is a bit cautious — this could be a shorter-term fluctuation, not a permanent change.

"In the next 10 years, maybe it could switch back," he says. "Until we get a much longer time series, we don't know."

Whatever the case, the speed of change in the ocean is disturbing to marine scientists like Paul Falkowski at Rutgers University.

"It is amazingly fast if true," Falkowski says.

He says marine scientists using more primitive instruments from ships saw this trend starting long ago, back in the early days of the Industrial Revolution.

"We can see that over 100 years, the ocean has gotten clearer and clearer in the center," Falkowski explains. "So this is a long-term trend."

He, too, isn't sure that the trend will keep up at its current speed. But the long-term outlook is unsettling. He says the South Pacific Ocean is currently the clearest and least productive region of the Earth's oceans.

"If we made the entire world's oceans like that, we'd probably reduce the productivity by at least a factor of two. And that would be an extraordinarily large change, which I don't want to think about," Falkowski says.

Fisheries, which are already under heavy stress from nets and lines, would suffer even more, he says. Reefs would suffer, too. In all, the outlook for the oceans is bleak.

And we may not be fully aware of the situation as it changes. The satellite that made these critical measurements is nearing the end of its lifespan, and there is no full replacement in the works. So, in a few years, U.S. scientists may not be able to look at the color of the ocean from space to track this trend.