Accessibility links
Art, and Hope, from the Ashes of Hiroshima After surviving the bombing of Hiroshima, Ikuo Hirayama went on to turn the devastation into art, creating through his paintings a "requiem" for those who lost their lives in the war. "I believe that flowers can blossom from anguish and inhumanity," he says.

Listen
Art, and Hope, from the Ashes of Hiroshima 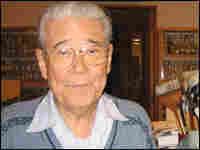 Ikuo Hirayama says the wish for peace is at the core of his art work. Robert Rand hide caption 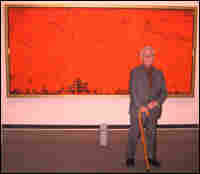 Takato Kageyama, who lost his parents and two sisters in the bombing, stands before "The Holocaust of Hiroshima" during a recent retrospective of Hirayama's work. Robert Rand hide caption 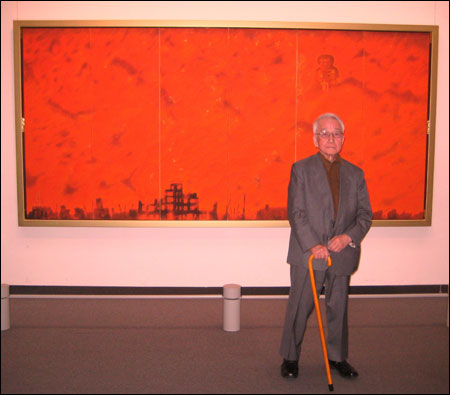 Takato Kageyama, who lost his parents and two sisters in the bombing, viewed "The Holocaust of Hiroshima" during a recent retrospective of Hirayama's work.

Today, the Japanese city of Hiroshima is a thriving metropolis of 1.2 million that speaks with the rumble and squeal of streetcars and traffic. But on Aug. 6, 1945, an atomic bomb shattered the city, killing more than 90,000. Of those who survived, one man, Ikuo Hirayama, would go on to turn the devastation into art.

Now a septuagenarian with a shock of white hair and kindly, sympathetic eyes, Hirayama was 15 years old when the atomic bomb detonated. He describes the bombing through a translator:

"There was a powerful flash right in front of me. I covered my ears. And there was a strong wind, and I squatted down and the wind went right over my head. And I then tried to escape through waterfalls of fire."

Recovery Along the Silk Road

Many of his friends died. Hirayama grew ill from radiation sickness and his white-blood-cell count plummeted, but eventually he recovered. He left Hiroshima, adopted Buddhism as a way of honoring the dead, and took up painting, practicing an ancient technique called Nihonga, in which colors are blended from ground-up mineral pigments, then attached to the canvas with glue.

Hirayama became famous as a painter of Buddhist images and of the Silk Road, the highway that brought Buddhism to Japan. His Silk Road paintings convey Hirayama's belief that the road, with its exchange of commerce and ideas, showed that cultures can interact constructively. The paintings epitomize a sense of hopefulness and cooperation, peace and tranquility, the antithesis to Hiroshima, 1945.

Two decades after the bombing, Hirayama finally returned to Hiroshima. He visited the city's Atomic Bomb Memorial Park, and found himself drawn by the hiss and flicker of a flame honoring the dead.

"I saw the color of the fire, which was orange. It reminded me of the day of the bombing, and I could not get rid of that color behind my eyelids," he says.

Hirayama immediately began sketching out what would become one of his most powerful works, a huge, six-paneled canvas called "The Holocaust of Hiroshima."

It's a striking painting; most of the canvas is a blood-red sky, filled with wisps of dirty clouds. In the upper right, the Buddhist god of wrath looks down upon the city.

Hirayama says that despite the sorrow and destruction portrayed in "The Holocaust of Hiroshima," the painting offers a message of hope.

"The Buddhist god is telling everybody to rise like a Phoenix, to stand up and live for all eternity," he explains. "I believe that art can overcome hardships. I believe that flowers can blossom from anguish and inhumanity. You can overcome these things and make something beautiful."

For his part, Hirayama's efforts to create beauty have reached well beyond the canvas. As an honorary UNESCO ambassador, he travels the world promoting and personally funding the preservation of historic Silk Road sites. After Sept. 11, 2001, Hiramama tried, unsuccessfully, to convince the Taliban not to blow up the two magnificent Buddhas in the Silk Road village of Bamiyan, Afghanistan. He has also donated millions to support education in the arts.

"I started to create my artwork as a requiem for those who lost their lives in the war. The wish for peace is at the core of my work," says Hirayama.