Accessibility links
CEO Ken Stern Leaving NPR NPR's chief executive officer, Ken Stern, is leaving by "mutual agreement." Stern, who has served at NPR for 10 years, will be replaced on an interim basis by the chairman of the board of directors. 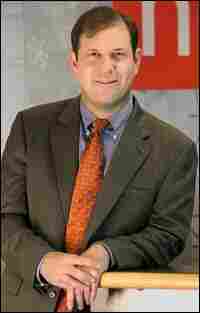 NPR's board of directors announced Thursday that CEO Ken Stern is leaving. He has been the CEO since Oct. 1, 2006. hide caption

In an announcement that surprised staff, NPR's board of directors said Thursday that CEO Ken Stern is leaving after 10 years at the network.

The board praised Stern for "turning around NPR's financial health." But it did not specify why Stern was departing.

Dennis Haarsager, chairman of NPR's board, is taking over as interim CEO while the board launches a national search. Howard Stevenson, the board's vice chairman, will perform the duties of the chairman.

Haarsager is associate vice president and general manager of educational and public media at Washington State University. Before that, he served as State Coordinator for Idaho Public Broadcasting. He plans to address NPR staff Friday.

In a statement, Haarsager said: "With our excellent programming in place, we will be seeking a new leader who can take NPR to the next level and ensure that we reach our full potential."

Many staffers in NPR's Washington headquarters were stunned — and confused — by the announcement.

One source familiar with the situation said Stern was leaving because of board criticism over his management style. Another source said the board concluded Stern was not the right person to lead a creative media company forward.

Stern arrived in 1999 as the network's chief operating officer. Since then, NPR's weekly audience doubled from 13 million to 26 million as it launched new programs and became a leader in podcasting.

During his tenure, Stern had pushed the radio network to expand into digital news. In an increasingly competitive media landscape, he often told staff that NPR had to find new ways to reach its audience or it could become irrelevant.

A third source said — though — that Stern had never articulated how NPR's hundreds of member stations would fit into that multi-media future.

Stern declined to speak on tape.

The announcement comes a day after NPR announced a $40 million deal with Washington, D.C., to keep its headquarters in the city. NPR plans to build a 10-story headquarters north of the Capitol to be completed in 2012.