Accessibility links
Remembering an Infamous New York Institution At Willowbrook, a Staten Island institution for the mentally disabled, residents were left to languish in squalor with little medical or other care. Willowbrook closed in 1987. Now Vanessa Leigh DeBello has written a memoir about her mother's time there. 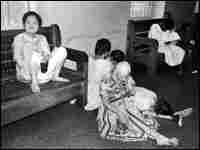 By the mid 1960s, Willowbrook, a Staten Island institution for mentally ill or delayed children, was filled to more than double its capacity. But crowding was the least of the horrors: Some residents of the state-run institution were reportedly used as test cases for hepatitis studies.

Others were left to languish, abused and living in squalor with little medical or mental health care. It wasn't until a print reporter named Jane Kurtin and then an aggressive 29-year-old investigative TV reporter — Geraldo Rivera — went in with hidden cameras that the world woke up to these forgotten children.

Now Vanessa Leigh DeBello tracks her mother's 16-year stay at the school in a new memoir Moron: A Daughter's Story of an Accidental Childhood in Willowbrook. "Moron" was one of three scientific terms established in the early 1900s for people with developmental delays. The strongest term was "idiot," followed by "imbecile."

So-called morons were considered high-functioning, and it was this opinion that doomed the Staten Island girl. At 18 months, the elder DeBello wasn't walking or talking. Her parents took her to a specialist, and after psychological exams and an IQ test that pegged her at 53 points, the recommendation was institutionalization. When she was 3, DeBello's parents dropped her off at Willowbrook, where she lived until she was 19 years old.

DeBello says her mother was always very open about her formative years at the New York school. DeBello remembers asking simple questions like "Did you have toothbrushes?" She says her mom recalled that basic necessities like toiletries were chronically missing. DeBello says her mother's mouth is filled with cavities. "I remember looking ... and seeing all that silver. 'Wow, look at that. When am I getting that?' "

But as she got older, DeBello learned not to envy her mother's past. Willowbrook was plagued by poor hygienic conditions. Residents suffered from skin rashes, DeBello says. There was constant poking and prodding with needles and an endless series of injections. When Robert F. Kennedy visited the school in 1965, he called Willowbrook a "snake pit." From the conditions her mother described, DeBello says, he was probably reacting as much to the smell as he was criticizing vicious and uncaring management.

Perhaps the most striking form of abuse is this: Some of the residents were deliberately exposed to hepatitis. Experts estimate that close to 100 percent of residents would have tested positive for the disease. Some contracted hepatitis through unsanitary drinking water, others were injected directly. Still others, DeBello says, were fed hepatitis-contaminated feces.

How could this happen? "The mentality was to put [these children] where we can't see them," DeBello says. She describes the Willowbrook campus — now used by the College of Staten Island — as isolated, with thick trees and a sense of being hidden. "Out of sight," she says, "it was also out of consciousness." Many parents left their children there and never came back.

Rivera's gripping TV coverage of conditions at Willowbrook not only helped shutter the institution, but also changed the way people were treated at such places nationwide. Willowbrook has been closed for more than 20 years. But DeBello says the site itself could be a more vivid reminder of what happened. Visit the former campus, she says, and you may not even know what happened. "There needs to be more education so we don't see something like Willowbrook ever happen again."

The legacy of Willowbrook remained alive in DeBello's mother. DeBello says her mother was always dressed poorly, even years after her discharge when she was married and had children. DeBello says she never achieved a sense of self-worth. "Take the credit card," her husband would say. "Go, buy something!"

No matter what, it will always remain true that DeBello's mother spent 16 grueling years at Willowbrook. The cruelest irony? "My mother was not mentally retarded," DeBello says. "She was misdiagnosed. She was an insider and was completely aware of the circumstances and abuse and neglect."