Accessibility links
Miami Condo Mess Brings 'Vultures,' More Bad News Over the last several years, developers have run wild in Miami: Dozens of new high-rise condo projects are going up downtown. At the same time, foreclosures have doubled, sales have slowed to a trickle, and prices are dropping. 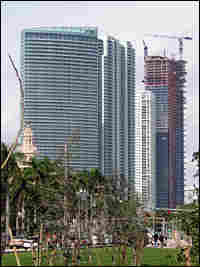 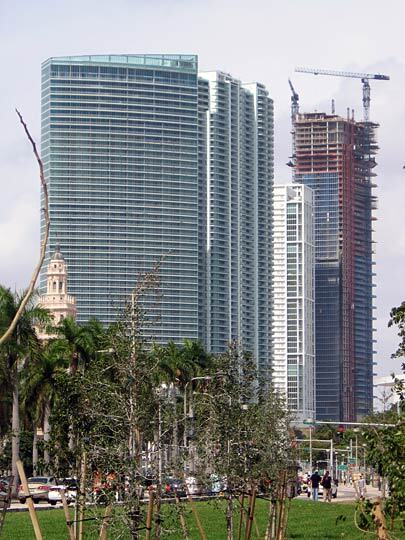 Over the last several years, developers have run wild in Miami, which many consider the poster child for the deflating U.S. real estate bubble.

Dozens of new high-rise condo projects are going up downtown. At the same time, foreclosures have doubled, sales have slowed to a trickle, and prices are dropping.

These conditions have attracted a new type of opportunistic buyer to Miami — the "vulture investor."

"Vultures don't kill, they clean up," he says.

Zalewski started his company two years ago, just as the Miami condo boom was peaking. But, as they usually do, that boom turned into a bust.

Within a 10-block radius, 22,000 new condo units are under construction, Zalewski says. In many cases, he says units were sold to speculators — people who put down $60,000 and $80,000 deposits with the intention of reselling the properties. With prices dropping, those are the sellers Zalewski targets as the most vulnerable.

Zalewski represents only buyers, preferably those with cash. With the weak dollar, he says he is seeing many foreign investors — people from Canada, Europe and Latin America here to pick up bargains. One recent buyer bought a $550,000 condo for $372,000, Zalewski says.

Investors Waiting for the Bottom, Walking Away

The scariest thing about Miami's condo meltdown is that there's no telling how far down the bottom is.

Jack McCabe runs McCabe Research, a company that closely tracks the South Florida condo market. Using a baseball analogy, he says the market is in the "bottom of the third inning, not the top of the ninth."

McCabe has been hearing from private equity and hedge fund managers ready to buy in when the market hits bottom. Currently, Miami has an oversupply that will take the market five years to absorb, he says. And he estimates there will be 25,000 more units finished by the end of next year.

The upshot? McCabe says many buyers are simply walking away from their deposits.

"We know that closings have not been running anywhere near what developers proposed by the number of dark buildings that we've had recently finished in the last 12 months — beautiful in the daytime, but if there's one light on out of 10 to 20 at night, it's surprising," he says.

Another problem McCabe notes is that getting a mortgage for a Miami condo has recently gotten harder. Last month, Bank United said it would no longer write mortgages on 191 condo projects in the city. Other lenders are also pulling back.

With all this bad news, you might think developers would be worried — but not 81-year-old Tibor Hollo. He has been developing projects in Miami since the 1950s. He says this downturn is really nothing new.

In the 58 years he has been in the business, Hollo says he's seen similar downturns nine times.

"Somehow, every six or seven years, you run into a dip," he says.

Hollo recently completed a 56-story condo project. He expects that as many as 100 buyers in the 635-unit project will end up walking away from their contracts.

But he isn't concerned about circling vulture investors. He plans to buy those units himself and hold them as rental properties until the market improves.

And he has already turned his attention to his next project: a 70-story hotel and office tower in the heart of the city, a project that he expects will become Miami's signature building.

Hollo says completion is at least 10 years away. By the time construction starts, Miami's current slump will be just a memory. But then again, he admits he's not one to dwell on the negative.

"If you're a developer, you have to be optimistic, you know. Let's face it — have you ever seen a pessimistic developer?" he says.

Certainly not in Miami.