Accessibility links
Melody Gardot's Road to Recovery Since being struck by a car, Gardot has suffered from short-term memory loss, sensitivity to light and sound, and the inability to sit up straight. But a doctor's suggestion to try music therapy has led to a burgeoning career on stage.

On the song "All That I Need Is Love"

On the title "Worrisome Heart" 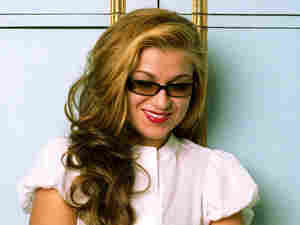 Four years after a serious car accident, Melody Gardot used the experience as a springboard to musical success she might never have achieved otherwise.

The singer, now 23, was hit by an SUV while riding her bicycle. Her injuries were serious and left her unable to sit up for more than 10 minutes. She suffered short-term memory loss and acute sensitivity to light and sound.

Gardot had played the piano before the accident, and a doctor suggested that she use music as a kind of recovery therapy. Since she couldn't sit comfortably at the piano, she picked up a guitar. Now, she's a professional musician, and her debut full-length album is called Worrisome Heart.

Scott Simon spoke with Gardot from the studios of WHYY in Philadelphia. She says that, prior to the accident, she was more interested in visual art than music. But once she started music therapy, the focus of her music-making changed rapidly.

Worrisome Heart is filled with sultry, jazz-inflected ballads. Though she lacked training in jazz, Gardot says she picked up the idiom intuitively. She credits her backing musicians for buoying her along the way.

Since the accident, Gardot has struggled with short-term memory loss, which forces her to write and record compositions before she forgets them. Furthermore, her heightened sensitivity to light and sound — which, despite hearing devices and sunglasses — makes performing somewhat difficult. But she says she still finds it enjoyable.

"To be honest with you, being on stage and performing is the 30, 40, 50 minutes of the most pleasurable experience that I have," Gardot says. "Because it's during that time that I don't really feel any pain. I think it's transcendental, and I also think it's kind of like when you have a headache, and someone punches you in the stomach, you forget all about your head."

She hasn't forgotten about her good fortune, though.

"I'm not one to wake up in the morning and forget that," Gardot says. "I forget a lot of things, but I don't forget that."