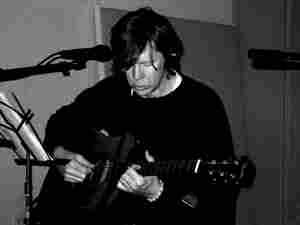 I can't remember the last time I felt as at ease during an in-studio performance as I did during Thurston Moore's live session at KEXP. Performing as a duo — Moore on acoustic guitar and Samara Lubelski on violin — they created a space so intimate yet so warm and welcoming that I was immediately drawn in. Stripped bare, the songs from his first truly song-based solo album in a dozen years remained fluid, melodious, and without pretension, just like Moore himself, who claimed after so effortlessly picking at the strings that he's not "a real guitar player." Listeners of this performance will certainly beg to differ.

During the interview, Moore freely discussed the democratic process of composing the album, the initial strangeness of performing Sonic Youth's Daydream Nation twenty years later at festivals, and how he's evolved as a musician. Throughout it all, though, he was always careful to temper any recognition of his accomplishment with examples of his own shortcomings, as when he offered an amusing cautionary tale about getting "lit-up" in front of one of his guitar heroes and appearing "sub-moronic." But that is his magic: this obvious veteran of alternative and independent music, who has continued to push boundaries and has never remained static during his long and prolific career, maintains the humility and joy of a first-timer so convincingly that even when in the midst of greatness you forget that you're sitting next to Thurston freakin' Moore.