Milder winters linked to climate change have sparked a massive infestation of bark beetles in New Mexico. Composer David Dunn has used the sounds the beetles make in his compositions. 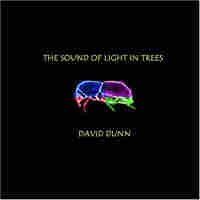 For today's installment in our series, Climate Connections with National Geographic, climate change and beetles. The tiny bark beetle is going gangbusters. Global warming has helped their population grow and they have infested forests in Western North America, killing hundreds of thousands of evergreens. In a moment, we're going to talk with a scientist who's studying this insect indicator of climate change but first, scientists aren't the only ones keeping a close watch or a close ear on the bark beetle. In New Mexico, a composer is listening to natural melodies spawned by global warming.

For NPR News, Maryalice Yakutchik has this report.

Mr. DAVID DUNN (Composer): I'm going to pound that into the xylem to the hard part of the tree.

YAKUTCHIK: He's using the rod to transmit sounds from the inside of the tree to his recorder. A scientific tool like this cost several thousand dollars. His contraptions about five bucks.

Mr. DUNN: These are all various kinds of sound transducers today. They're old.

YAKUTCHIK: There goes our bark beetle, tiny insects that are of the size of a grain of rice. They're infesting (unintelligible) forest. Here in New Mexico, they've killed hundreds of thousands of trees over the last few years. Once, bark beetles are kept in check by cold winters, but the winters are getting warmer. Bark beetles are on the move and on the rise.

Mr. DUNN: Their peak infestation times when you got thousands of beetles in a good-sized tree. It's an absolute cacophony.

YAKUTCHIK: Dunn thinks a lot of the sounds have to do with eating and sex. The bugs are reproducing more frequently. And Dunn's not all sheepish about listening in on their nuptial chambers.

Mr. DUNN: The female has of this little adapted sound-producing organ that's called a pars stridens and it's a set of very fine grooves, sort of like the grooves you'd see on a phonograph record. And she plays this like a percussion instrument by rotating her head in its socket.

YAKUTCHIK: In the past five years, Dunn watched the pine forest around his house fade from green to gray. As a composer, he wondered what you hear if you listen to dying trees.

Mr. DUNN: It started with just curiosity. I've always just been interested in unique sounds as it occur in the natural world but as this massive die-off of pinions around Santa Fe became evident, it just stimulated my curiosity further.

YAKUTCHIK: He takes the sounds he collects home to his studio. There, he arranges and mixes them. The result, a CD entitled "The Sound of Light and Trees." People told David Dunn they have used his bark beetle soundtrack to accompany dance performances and even chiropractic treatments. He admits that it's not exactly easy listening.

Mr. DUNN: One reviewer on Amazon said that this is an incredible sound piece but I doubt if I'll be able to listen to it very often because it sounds like my house is coming down around me.

YAKUTCHIK: It's not pity reviews that motivate Dunn. He hopes his compositions convey a serious urgency about global warming and their artistic witness to how climate change is reshaping the natural world.

Album
The Sound of Light in Trees: Bark Beetles and the Acoustic Ecology of Pinyon Pines
Artist
David Dunn