Accessibility links
California Home Schoolers Get the Heave-Ho An appellate court in California recently ruled that parents who home school their kids are breaking the law. Professor Luis Huerta of Columbia University explains the implications for the rest of the country. 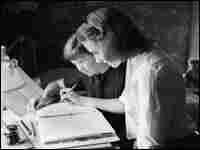 Religious belief remains the primary reason for homeschooling, but it's hardly the only one. Three Lions/Getty Images hide caption

An appellate court in California recently ruled that parents who home school their kids may be breaking the law. The decision requires parents to have filed paperwork to run their own private school, or to have enrolled their kids in a satellite school or to have credentialed tutors to do the teaching.

Luis Huerta, an assistant professor of education and public policy at Columbia University, says the decision could have massive implications not just for the nation's home schoolers, but for privacy advocates and future California Supreme Court decision-making.

It's difficult to give a snapshot of the people who home school in the United States, Huerta says. "It's an elusive number, and it's very difficult to track them down," he says. "If they chose to home school, they've chosen not to report to the state." He says there are probably 1.2 million children taught at home in the United States, up from 600,000 in 1996, a doubling in a little more than 10 years.

There are three dominant motivations most parents cite for home schooling their children. Religiosity has always been the principle reason. Another reason is politics, as most home schoolers are traditionally are conservative. But some are simply libertarians.

Huerta says regulations guiding the practice are fairly loose in most states. Only 34 to 35 states bother to explicitly acknowledge home schooling at all in their codes. Despite this absence, Huerta says, states like California do seem to permit for home schooling by allowing parents to teach their children at home as long as they file paperwork establishing themselves as small private schools, hire credentialed tutors or enroll their children in satellite schools.

But the court ruling that declared some home schooling unconstitutional, Huerta says, seemed to indicate that California regulators' occasional monitoring of the family's home efforts was deemed insufficient to qualify children as being enrolled in a school.

Huerta says the ruling is an unprecedented decision, and one that has prompted an uprising not just among home schoolers but also among privacy advocates. "This is an issue that's going to be taken all the way to the Supreme Court," he says. "It's going to open a Pandora's box of issues the court may not want to address."

He says the stakes are particularly high. "This begins that slippery slope of regulating home schooling," he says. But don't underestimate the parents of those 1.2 million home schoolers, who are, he says, a very organized robust group, that they will be very quick to organize, and very quick to do aggressive lobbying to make sure the state doesn't pursue this. "They will fight tooth and nail to keep the state out of their living rooms, it's what the home schoolers have fought for so hard for so long."