Accessibility links
Assisted Listen: TV Homage Boosts Buckley After a rendition on American Idol, a tune by Jeff Buckley rocked the iTunes charts. Offering a tour of Buckley's career is David Browne, music journalist and author of Dream Brother, a dual biography of Jeff and his father Tim. 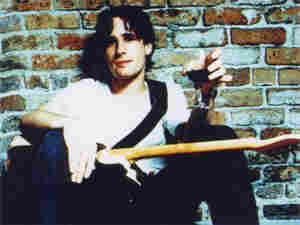 After it was performed last week on American Idol, a tune made popular by Jeff Buckley, the expressive singer who died at age 30, shot to the top of the iTunes charts. Offering a tour of Buckley's music and tragic life is David Browne, a veteran music journalist and author of Dream Brother, a dual biography of Jeff and his father, Tim.

The song that put Buckley on American Idol is "Hallelujah," written by Leonard Cohen. The track comes off Buckley's 1993 album, Grace, and is among a selection of 10 songs that comprised his only full-length studio release. Beyond the Cohen tune, Browne says, Buckley's own material has a deeper range, reflecting his varied influences. Growing up, Buckley listened to and played in prog rock bands in which technically dazzling acts like Rush and Yes dictated the style. It was only later, Browne says, that the young musician discovered the emotion and texture of more classically admired songwriters such as Van Morrison and Elvis Costello. Listen to Grace, Browne says, and you realize Buckley's songs are "these little journeys. They go from soft to loud, his voice soars. His songs are these kaleidoscopic mirrors."

Grace has become legend for a simple reason, Browne says — the quality. "It's an incredibly timeless album," he says. "Like Nick Drake, Buckley isn't tied to a particular time." In the almost 15 years since its release, the album has earned praise from fans and musicians alike, with high profile accolades from Colplay, Rufus Wainwright and Nelly Furtado, who all cite it as a significant influence. "It's sold probably three times more than it did at the point Jeff died," Browne says.

By 1997, when Buckley passed away, Grace had sold approximately 200,000 copies, a lack of massive commercial success Browne blames on the mid-90s dominance of artists like Beck and other less emotional alternative rock. "A lot of Jeff's music is nakedly passionate and earnest and very heart-on-the-sleeve," Brown says. He recalls a night Buckley played a club in downtown Manhattan, where he performed his own fragile songs alongside covers of Billie Holiday, the Smiths and Elton John. "People didn't get it," Browne says. "He seemed corny, singing these sincere songs."

Many people Browne spoke to for his book said there were at least two Jeff Buckleys. The less surprising side of the musician found him angst-y, the kind of guy who pondered life, in part because his father Tim Buckley, another largely unheralded musician, died so early his son barely knew him. "You hear the weight of that in his music," Brown says. But Jeff Buckley was also a total goofball, known for spot-on impersonations. One friend Browne spoke to broke it down another way: There was regular Jeff and mythological Jeff.

Jeff Buckley died young, tragically. Some people suspected suicide, others argued it was an accident. "He was a reckless guy," Brown says. "You can hear that in his music, with the risks he took. 'I'm gonna go this way. '" Buckley drowned attempting to swim across the Wolf River, a tributary of the Mississippi outside Memphis, Tenn. "There was something about Jeff that didn't fit with the times," Browne says. "But that's what helped him transcend the times."