Accessibility links
Is Prostitution Really Such a Big Deal? When he was New York's attorney general, Eliot Spitzer went after just the kind of prostitution rings he has now been linked to. Harvard law professor Alan Dershowitz discusses his former research assistant and why he thinks paying for sex is not a problem.

Listen
Is Prostitution Really Such a Big Deal?

Is Prostitution Really Such a Big Deal?

When he was New York's attorney general, Eliot Spitzer went after just the kind of prostitution rings he has now been linked to. Madeleine Brand talks to Harvard law professor Alan Dershowitz about his former research assistant and why he thinks prostitution is not a problem.

Margot Adler: Spitzer's Fate Up in the Air 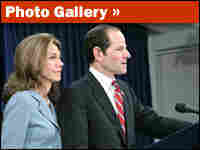 Gov. Eliot Spitzer speaks in New York City with his wife, Silda, after it was reported that he has been involved in a prostitution ring. Timothy A. Clary/Getty Images hide caption

The Case Against the Emperor's Club

New York Gov. Eliot Spitzer stayed out of the public eye Tuesday, a day after allegations surfaced that he spent thousands of dollars for a night with a call girl.

But that didn't stop the increasing pressure for the New York governor to step down. Three New York newspapers want him to resign. And a top state Republican is threatening to push for impeachment if Spitzer doesn't leave within 48 hours.

In order for articles of impeachment to get to the floor, there would first have to be support from the Democratic majority in the state Assembly.

The process would then have to gain at least two-thirds approval of the combined vote of the Republican-controlled Senate and the nine-member Court of Appeals to proceed to trial.

Two Democratic officials close to Spitzer say he hasn't decided whether to resign, and that he hasn't set a timetable for a decision.

A law enforcement official told the Associated Press Tuesday that the case grew out of a public corruption inquiry triggered by Spitzer's movement of cash to bank accounts operated by the call-girl ring.

Investigators said the public-corruption unit of the U.S. attorney's office got involved after the IRS looked into a complaint of a potential violation of the Bank Secrecy Act, the government's main tool against money laundering.

The governor could potentially be charged with a crime called "structuring" — meaning that the payments were designed to hide their actual purpose.

After issuing a brief apology Monday, Spitzer made only a vague mention to his future, saying that he "must now dedicate some time to regain the trust of my family." He did not elaborate.

A Spitzer spokesman said that the governor has retained the Manhattan law firm of Paul, Weiss, Rifkind, Wharton and Garrison, one of the nation's biggest firms.

Spitzer was allegedly caught on a federal wiretap arranging to meet in a Washington hotel room the night before Valentine's Day with a prostitute from a call-girl business known as the Emperor's Club V.I.P.

The governor has not been charged, and prosecutors would not comment on the case. But he is reportedly identified in an affidavit as Client 9.

Excerpts from the federal complaint that charges four individuals with operating a prostitution ring. The complaint was filed in the Southern District of New York. It is reported that Client-9 is New York Gov. Eliot Spitzer. Temeka Lewis is one of the four defendants. "Kristen" is an Emperors Club prostitute, the document says. QAT, mentioned in section 75, is a bank account customers used for payments.

b. February 13, 2008, Interstate Transportation From New York To Washington, D.C.

74. On February 12, 2008, at approximately 2:37 p.m., Temeka Rachelle Lewis, a/k/a/ "Rachelle," the defendant ... left a message for "Kristen" that the "deposit" had not arrived today, but that they should be able to do the trip if the deposit arrived tomorrow. ... Lewis and "Kristen" then discussed the time that "Kristen" would take the train from New York to Washington, D.C. Lewis told "Kristen" that there was a 5:39 p.m. train that arrived at 9:00 p.m., and that "Kristen" would be taking the train out of Penn Station. Lewis confirmed that Client-9 would be paying for everything — train tickets, cab fare from the hotel and back, mini bar or room service, travel time, and hotel. Lewis said that they would probably not know until 3 p.m. if the deposit arrived because Client-9 would not do traditional wire transferring.

75. At approximately 8:14 p.m., Temeka Rachelle Lewis, a/k/a/ "Rachelle," the defendant, ... received a call from Client-9. During the call, Lewis told Client-9 that the "package" did not arrive today. Lewis asked Client-9 if there was a return address on the envelope, and Client-9 said no. Lewis asked: "You had QAT ...," and Client-9 said: "Yup, same as in the past, no question about it." Lewis asked Client-9 what time he was interested in having the appointment tomorrow. Clinet-9 told her 9:00 p.m. or 10:00 p.m. Lewis told Client-9 to call her back in five minutes....

78. At approximately 3:20 p.m. Temeka Rachelle Lewis, a/k/a/ "Rachelle," the defendant ... received a call from Client-9. During the call, Lewis told Client-9 that they were still trying to determine if his deposit had arrived. Client-9 told Lewis that he had made a reservation at the hotel, and had paid for it in his name. Client-9 said that there would be a key waiting for her, and told Lewis that what he had on account with her covered the "transportation" (believed to be a reference to the cost of the trainfare for "Kristen" from New York to Washington, D.C.). Lewis said that she would try to make it work ...

82. At approximately 8:47 p.m. Temeka Rachelle Lewis, a/k/a/ "Rachelle," the defendant ... received a call from Client-9. During the call, Client-9 told Lewis to tell "Kristen" to go to the hotel and go to room 871. Client-9 told Lewis that the door would be open. ... Client-9 asked Lewis to remind him what "Kristen" looked like, and Lewis said that she was an American, petite, very pretty brunette, 5 feet 5 inches, and 105 pounds. Client-9 said that she should go straight to 871, and if for any reason it did not work out, she should call Lewis.

(Parts 83 and 84 concern "Kristen" telling Lewis that she is in the hotel room, and more discussion of payment.)

85. On February 14, 2008, at approximately 12:02 a.m., Temeka Rachelle Lewis, a/k/a/ "Rachelle," the defendant, received a call from "Kristen." ... Lewis asked "Kristen" how she thought the appointment went, and "Kristen" said that she thought it went very well. Lewis asked "Kristen" how much she collected, and "Kristen" said $4,300. "Kristen" said that she liked him, and that she did not think he was difficult. "Kristen" stated: "I don't think he's difficult. I mean it's just kind of like ... whatever ... I'm here for a purpose. I know what my purpose is. I'm not a ... moron, you know what I mean. So maybe that's why girls maybe think they're difficult..." "Kristen" continued: "That's what it is, because you're here for a purpose. Let's not get it twisted — I know what I do, you know." Lewis responded: "You look at it very uniquely, because. ... no one ever says it that way." Lewis continued that from what she had been told "he" (believed to be a reference to Client-9) "would ask you to do things that, like, you might not think were safe — you know — I mean that ... very basic things. ... "Kristen" responded: "I have a way of dealing with that. ... I'd be like listen dude, you really want the sex? ... You know what I mean." Near the end of the call, Lewis and "Kristen" discussed "Kristen's" departure via Amtrak, the room that Client-9 had provided for "Kristen," and "Kristen's" share of the cash that Client-9 had provided to her.