Accessibility links
The Long, Colorful History of the Mann Act Federal prosecutors might charge Eliot Spitzer under a relatively obscure 1910 law that was originally intended to combat forced prostitution. It has been used against such celebrities as Charlie Chaplin, Frank Lloyd Wright, Chuck Berry and Jack Johnson.

Listen
The Long, Colorful History of the Mann Act 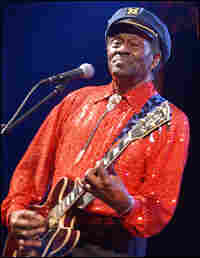 In 1959, musician Chuck Berry was convicted under the Mann Act. He ended up serving 20 months in prison on a variety of charges. Alain Jocard/AFP/Getty Images hide caption 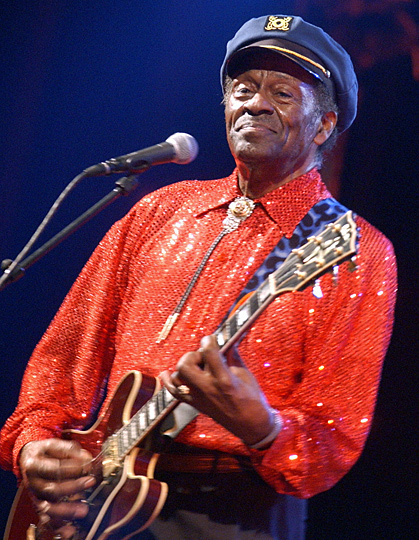 In 1959, musician Chuck Berry was convicted under the Mann Act. He ended up serving 20 months in prison on a variety of charges.

Federal prosecutors might charge New York's Democratic governor, Eliot Spitzer, under a relatively obscure — and controversial — 1910 law that was originally intended to combat forced prostitution and "debauchery." Its official name is the White Slave Traffic Act, but it's better known as the Mann Act, named after its author, Rep. James R. Mann (R-IL).

In recent years, the Mann Act has been used selectively. But it has not faded into irrelevance. Last week, four people suspected of running the Emperor's Club — the prostitution service that Spitzer allegedly frequented — were charged with violating the Mann Act, among other crimes including money laundering.

Enacted during a time of great change and "moral panic," the Mann Act was originally designed to combat forced prostitution. The law, however, has been applied broadly over the years and, critics say, used as a tool of political persecution and even blackmail. In the past century, thousands of people have been prosecuted under the Mann Act, including celebrities such as Charlie Chaplin, Frank Lloyd Wright, Chuck Berry and Jack Johnson.

Johnson, the first African-American heavyweight boxing champion, was among the first to be charged under the act. In 1913, he was accused of ostensibly transporting a prostitute from Pittsburgh to Chicago. Johnson was convicted and given the maximum sentence: one year and one day. Critics, however, believe that Johnson's case was racially motivated — the "prostitute" was his white girlfriend.

In 1944, Charlie Chaplin was prosecuted under the Mann Act in a case stemming from a paternity suit involving the actress Joan Barry. Some believe the case was motivated by Chaplin's left-of-center political views. He was ultimately acquitted, but his image in the U.S. never fully recovered.

In 1959, singer Chuck Berry was convicted under the Mann Act of transporting across state lines an underage Apache girl who was arrested on a prostitution charge weeks later. He ended up serving 20 months in prison on a variety of charges.

A Product of Its Time

The Mann Act, perhaps more than most laws, was clearly a product of its time. At the turn of the last century, the Industrial Revolution had taken hold and the old order of rural, largely male-dominated America began to fade. New technologies, such as the typewriter, allowed many women to support themselves financially for the first time, and many flocked to the cities. The modern notion of dating was born.

With these changes came concerns about the country's moral underpinnings. By 1907, a full-fledged moral panic set in. There were rumors, taken as truth, that women were being forced into prostitution and shuttled around the country by vast networks controlled by immigrants, who were arriving in the U.S. by the millions. The plague of "white slavery" was on everyone's minds. Muckraking journalists fueled the hysteria with sensationalized stories of innocent girls kidnapped off the streets by foreigners, drugged, smuggled across the country and forced to work in brothels.

It was into this charged environment that the Mann Act was born. Signed into law by President Taft in 1910, the Act made it a crime to transport women across state lines "for the purpose of prostitution or debauchery, or for any other immoral purpose." It was that last clause "for any other immoral purpose" — that would prove the most problematic and give rise to concerns that the law enabled the government to legislate morality.

Over the years, the Supreme Court has repeatedly held that prosecution under the Mann Act was constitutional. The act has never been repealed, but it has been substantially amended in recent years. In 1978, Congress updated the definition of "transportation" in the act and added protection for minors of either sex against sexual exploitation.

A 1986 amendment further protected minors and replaced "debauchery" and "any other immoral purpose" with "any sexual activity for which any person can be charged with a criminal offense." That allowed the government to get out of the business of "legislating morality" while retaining the essence of the Mann Act as a weapon in the fight against human trafficking.