Accessibility links
Database Key in Restoring New Orleans Rebuilding New Orleans takes a lot of sweat, elbow grease and, in some cases, good software. Hal Roark, who works for a group that's improving the Broadmoor neighborhood, uses a database to match houses in need of repair with volunteers who can fix them. 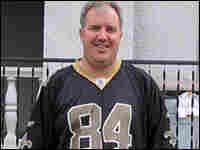 Hal Roark is helping to save his New Orleans community with the help of a database that catalogs the needs of 2,400 houses in his neighborhood that still need to be repaired. Marisa Penaloza, NPR hide caption 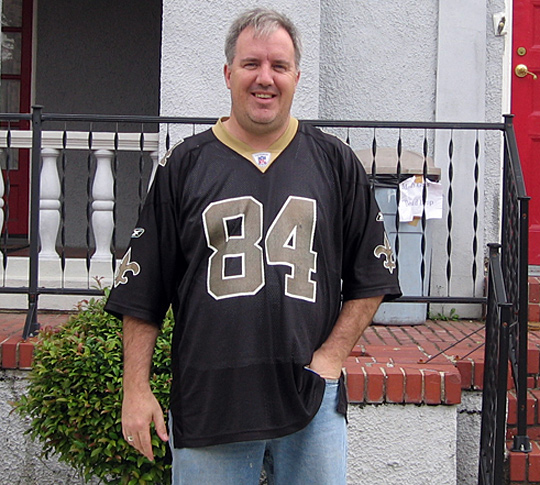 Hal Roark is helping to save his New Orleans community with the help of a database that catalogs the needs of 2,400 houses in his neighborhood that still need to be repaired.

Hal Roark is helping to save his community with the help of a great database. Roark works for his neighborhood association in the low-lying Broadmoor section of the city, and he uses the database to match the needs of each house and each resident in the neighborhood with a group of volunteers. The Broadmoor Development Corp.'s goal, Roark says, is to improve the neighborhood and "make it better than it was before."

Roark knows his group can't fix up 2,400 homes still in need of repair in Broadmoor on its own. His volunteers include college students and members of churches. "The other thing we're trying to tap into is all the convention business that comes into New Orleans and saying, 'Look, hook up with us for a day to come into Broadmoor and help us rehab a house,'" Roark says.

You might think it would be easy for volunteers to find work down here — there's still so much to do two-and-a-half years after Katrina. But Bill Sharpe, the leader of a group of Michigan volunteers who helped Roark, says it's not that easy.

"We wanted to send people down, but we wanted to make sure that we were actually helping, rather than sending volunteers down for a field day," Sharpe says.

Broadmoor was so badly flooded after Hurricane Katrina that the city wanted to bulldoze the area and turn it into a park. That's when Roark and his neighbors decided to save this community of working-class people.

"The fact [that] they wanted to mow down our neighborhood was the last straw," Roark says. "People came out of the woodwork to say, 'This is completely unjust.'"

Although there are still a lot of wrecked homes in the neighborhood, Roark sees progress.

The community brought back the local library and cajoled local officials into restoring the school. Someday, Broadmoor will have things the neighborhood never had before Katrina.

The secret to Broadmoor's success is the handmade approach to recovery — the database, called Salesforce.

Salesforce was built for salespeople, but Roark and his army of college interns have repurposed it so he can catalog the needs of Broadmoor's 2,400 homes and the 7,000 residents who lived here before Katrina.

With this database, Roark can explain to donors what they're getting for their money. Donors appreciate that. And, Roark says, it also helps him satisfy the human needs of volunteers, who want to do more than paint a stranger's house.

For example, the Broadmoor group helped match Duane and Nancy Parker to a house in the neighborhood that they moved into a year ago. The Broadmoor group wanted the family to move in because Nancy is a New Orleans police officer. The hope is that having a police officer in the area will reduce crime. Since the Parkers moved in, they discovered some roof problems. When that showed up in the database, Roark responded right away.

But in an old house like the Parkers', which flooded during Hurricane Katrina, there's always something to fix. Down in the basement, there are some leaky pipes. When a volunteer with plumbing skills arrives, Roark says the plumber will be matched up with the Parkers' house.

Roark has an expression for this process: Be the cavalry that you want to see coming over the hill.

There are 2,400 homes in the Broadmoor neighborhood of New Orleans, not 7,000. There are 7,000 residents who lived in Broadmoor before Hurricane Katrina. The original audio version of the story included an inaccurate total of the number of homes in Broadmoor.