Accessibility links
African Refugees Face Peril on Egypt-Israel Border As many as 7,000 refugees from Sudan and Kenya have begun pouring into Israel through lax border crossings with Egypt. In the last year, Egyptian soldiers have killed five people — and possibly dozens more, reports Sheera Frenkel. 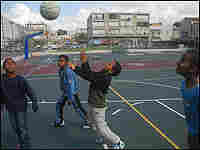 As many as 7,000 Africans from Sudan, Eritrea and Kenya, fleeing unrest and economic distress in their own countries, have begun pouring into Israel through border crossings with Egypt. At least five people have killed — with the possibility of dozens more yet to be reported — in shootings by Egyptian border guards in the last year, reports Sheera Frenkel, a Jerusalem-based reporter with the Times of London.

As a state founded in part to be a safe haven for refugees, Frenkel says, Israel now faces an agonizing quandary: whether to call the incoming Africans refugees or migrants? The distinction matters, Frenkel says, because refugees face physical dangers and thus have an argument for protection, whereas migrants are seen as seeking to improve their economic situation and have a more tenuous claim to special status. The issue remains unresolved, she says, because there is no definitive law on Israel's books. Nongovernmental bodies such as United Nations High Commission for Refugees and Human Rights Watch don't establish a single set of guidelines.

Frenkel says it's important to remember that behind this abstract discussion of nomenclature are real people. "Many are coming from Darfur," she says, referring to Sudan's troubled western region. "These are people who by any standards would be considered refugees." Since they left, some of their villages have again become peaceful. "So those people's status changes."

What's more, she argues, a migrant might be able say, "At home I'll work all day to be able to provide half a meal a day for my family." A refugee, meanwhile, says, "I'll be threatened if I go home." "Where does the line really get drawn?" she asks.

Frenkel says the bulk of the Africans are crossing the porous southern border along the Sinai Peninsula. "There's this image of Israel's border as a massive concrete barrier," she says. "But Israel's southern border, ever since a peace treaty with Egypt, is just a barbed wire fence, some of it just five feet high." She describes the barrier as being guarded sparingly by small groups of Egyptian border police on one side and Israeli police on the other. Even if officials get an alert in advance of an approaching group, she says, by the time the soldiers arrive, the fleeing people have often moved across and are gone.

But Frenkel says that when border-crossers are intercepted, Egyptian guards in particular have used excessive force. A few days ago, a 24-year-old Sudanese man was reportedly shot in the back as he tried to enter Israel.

Why the heavy hand? Frenkel points to a deal that reached by Israeli Prime Minister Ehud Omert and Egyptian President Hosni Mubarak that brokered security responsibilities along the counties' shared border. Because the route had been used for drug smuggling and human trafficking, the Egyptian side's takeaway from the deal was to greatly increase its border patrols.

Frenkel says the crackdown over the last six months has been significant. She also says human rights organization she's spoken to in Israel and Egypt have heard of dozens of other shootings. Frenkel described a day a year ago when Israeli soldiers witnessed a lynching, and another when Egyptian soldiers used rocks, stones and pieces of wood to kill illegal crossers.