Accessibility links
Obama's Mississippi Win Comes Amid Racial Divide Sen. Barack Obama topped Democratic rival Hillary Clinton in Tuesday's Mississippi primary. Despite overwhelming support in the African-American community for Obama, exit polls showed that he lost ground with white voters in what turned out to be the most racially polarized vote so far.

Sen. Barack Obama topped Democratic rival Hillary Clinton in Tuesday's Mississippi primary. Despite overwhelming support in the African-American community for Obama, exit polls showed that he lost ground with white voters in what turned out to be the most racially polarized vote so far.

Here's the result of the final primary before the Democrats spend six weeks battling over Pennsylvania. Mississippi voted yesterday, and Barack Obama won. That's the good news for the Obama campaign. Any disappointment came in the exit polls, which showed a racial divide among Mississippi voters, as NPR's Audie Cornish reports.

AUDIE CORNISH: Obama won at least 17 pledged delegates in Mississippi, perhaps about half a dozen more than Hillary Clinton - a net gain that means a lot after the setbacks he suffered a week earlier.

Senator BARACK OBAMA (Democrat, Illinois; Democratic Presidential Candidate): I'm grateful to the people of Mississippi for the wonderful support, and, you know, what we've tried to do is steadily make sure that in each state we are making the case about the need for change in this country.

CORNISH: Obama's victory was bolstered by 90 percent domination among African-American voters such as Leonora Cameron.

CORNISH: Some of Obama's backers, such as Delores Jones, say they were turned off by the Clinton campaign.

CORNISH: In Mississippi's open primary, black voters made up a little more than half of the vote. Among the other half, exit polls found more than 70 percent of whites supported Hillary Clinton. At a Clinton campaign party, voter Vicki McDonald says she's happy Clinton has been picking up steam lately, but fears seeing the party polarized.

Ms. VICKI MCDONALD: I'm a little concerned about that. I mean, I definitely I want there to be a universal sort of feel in the Democratic Party. I mean, this is our race to win.

CORNISH: But now Clinton supporter and former vice presidential candidate Geraldine Ferraro has caused another controversy by saying Obama was only getting attention because of his race. Clinton said she regretted the remarks, but did not denounce Ferraro, who stood by her statement and said her critics were racially motivated.

Obama called the comments patently absurd, and in a CNN interview, called into question the tone of his rival's campaign.

Sen. OBAMA: I've been careful to say that I think Senator Clinton is a capable person and that should she win the nomination, obviously, I would support her. You know, I'm not sure that we've been getting that same approach from the Clinton campaign. But I'm confident that once we decide on a nominee, we go through the convention, that, in fact, the party's going to be unified.

CORNISH: Clinton herself had already moved on. In Harrisburg, Pennsylvania, Clinton made no mention of Mississippi and no mention of the announcement from the Texas Democratic Party that caucuses in that state awarded more of its delegates to Obama than to her. Instead, she kept her focus on the next state that votes in six weeks.

Senator HILLARY CLINTON (Democrat, New York, Presidential Candidate): We're going to go work across Philadelphia, across Pennsylvania. We're going to put together a winning team, and we're going to go with your help all the way to the White House. Thank you all very much, and God bless you.

CORNISH: Pennsylvania is indeed a lot to look forward to. The state has a whopping 158 delegates at stake and a chance to set one candidate or the other on the path to the nomination. 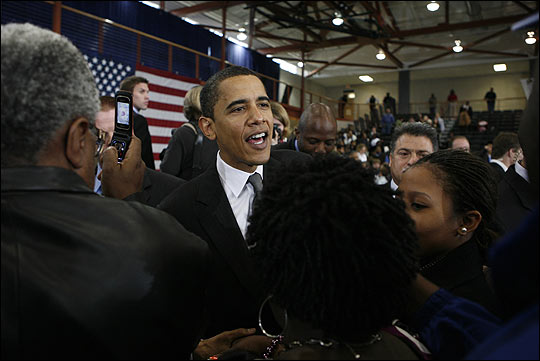 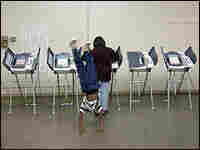 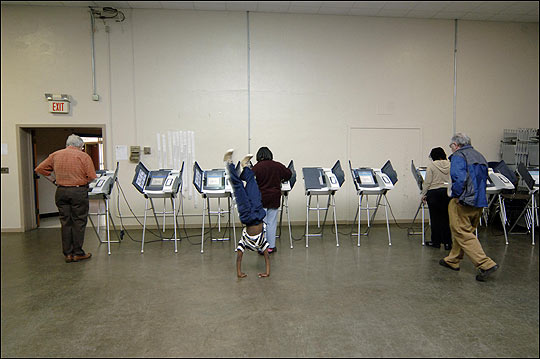 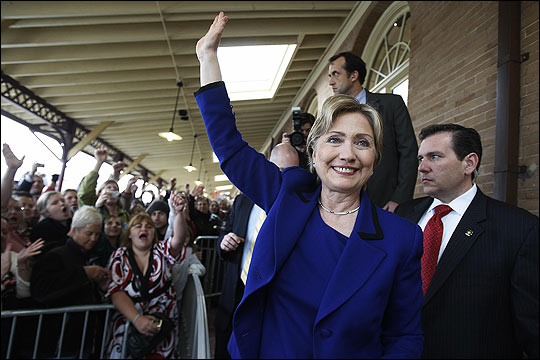 Democratic New York Sen. Hillary Clinton greets supporters on the platform before a campaign rally at the Hattiesburg train depot in Mississippi on Friday.

Charles Holloway (left) is helped by a friend at a voting machine during the Democratic primary in Meridian, Miss., on Tuesday. Marianne Todd/Getty Images hide caption 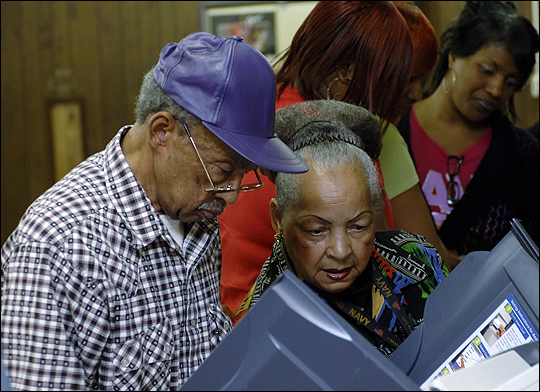 Charles Holloway (left) is helped by a friend at a voting machine during the Democratic primary in Meridian, Miss., on Tuesday.

Illinois Sen. Barack Obama easily won Mississippi's Democratic primary on Tuesday, in a contest that split along racial lines as stark as any in the nominating contests to date.

Exit polls conducted for The Associated Press and TV networks showed that Obama captured 90 percent of the African-American vote in the Democratic primary, while New York Sen. Hillary Clinton won the support of more than 70 percent of whites.

Mississippi's population is nearly 40 percent African-American, and black voters are concentrated in the Democratic Party, so their support was enough to give Obama the advantage. Half of the Democratic primary voters were black, exit polls showed.

Following Obama's victory, Clinton campaign manager Maggie Williams congratulated him. "Now we look forward to campaigning in Pennsylvania and around the country," she said in a statement.

Obama briefly appeared on CNN after the results were announced and took a swipe at the Clinton campaign and at statements made by Geraldine Ferraro, a Clinton supporter and fundraiser and a former vice presidential candidate. Ferraro told a California newspaper last week that "If Obama was a white man, he would not be in this position."

"We've been very measured in terms of how we talk about Senator Clinton," Obama told CNN. "I'm not sure we've been getting that same approach from the Clinton campaign."

Obama called on the Clinton campaign to renounce the Ferraro statement. Clinton said she did not agree with Ferraro and left it at that.

The Republicans also held a primary on Tuesday, with 36 delegates at stake. Arizona Sen. John McCain handily won the day's vote, despite slight attention paid to the state. As the presumptive GOP nominee, he has been focused on swing states in the general election. He spent Tuesday in Missouri, where he discussed economic issues, such as the North American Free Trade Agreement.

The challenge for Obama in Mississippi was to win enough delegates to help reduce or even eliminate the delegate gain Clinton made on March 4, when she won three primaries in Ohio, Rhode Island and Texas and made a net gain of 15 delegates.

But by winning the caucuses in Texas — which has both caucuses and a primary — along with the Wyoming caucuses and the Mississippi primary, Obama had a chance to restore his prior lead in pledged delegates. In Mississippi, there were 33 Democratic delegates at stake.

Mississippi is the last Democratic contest until April 22, when 158 pledged delegates will be in play for the Democrats in Pennsylvania's closed primary. After that, votes will remain in North Carolina, Indiana, Kentucky, West Virginia, Oregon, Montana and South Dakota.

But these contests are not expected to give either candidate a net gain sufficient to lock up the race. Instead, the Democratic contest will be determined by the preferences of superdelegates, the roughly 800 automatic delegates who can support either candidate, regardless of the popular vote. About a third of these are members of Congress, who thus far have split evenly between the candidates. Most of the rest are members of the Democratic National Committee, who thus far have favored Clinton.

On the day of the primary, Obama campaigned at a diner in Greenville, Miss., where he spoke about the economic woes of the state's Delta region.

"We just haven't seen as much opportunity come to this area as we would like," he told supporters, adding that one of the challenges facing the new president will be "serving all communities and not just some communities." Mississippi has the lowest median household income of any state at $34,343.

Clinton also campaigned in Mississippi, making stops in Hattiesburg and Clarksville last week, while her husband, former President Bill Clinton, made appearances over the weekend at town hall meetings and fish fries along the Gulf Coast, areas devastated by Hurricane Katrina.

Bill Clinton played up what he saw as his wife's ability to encompass the two dominant themes of this political season: change and experience. "This idea that there is a conflict between experience and change is just bull," he said.

In Jackson, voters such as Jackson State University professor Isaiah Madison said they were excited about the hopeful tone of Obama's campaign.

But at a rally featuring Bill Clinton on Saturday, voter Rebecca Pitts said she did not know enough about Obama to support him. "I never heard of this man 'til now, and this lady here is the truth of it. She has run the country once before, and she can probably do it again," she said.

Even as Mississippi voters went to the polls, the Democratic candidates had refocused their attentions on the Pennsylvania contest, as well as the possibility of a shared ticket.

Clinton, who spent her childhood summers at a lake house north of Scranton, told Pennsylvania supporters that a shared ticket could help Democratic voters who feel torn between the two candidates.

Obama also campaigned in Pennsylvania on Tuesday. But he did not leave Mississippi without telling voters that he is not interested in being vice president.

"I don't know how somebody who is in second place is offering the vice presidency to the person who is first place," he told a crowd in Columbus, Miss. "I don't want anybody here thinking that somehow, 'Well, you know, maybe I can get both.' Don't think that way. You have to make a choice in this election."