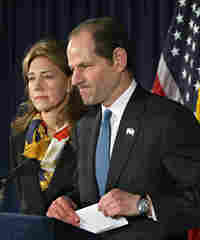 New York Gov. Eliot Spitzer has resigned, bowing to enormous pressure for him to leave public office in the wake of allegations that he has repeatedly used the services of a high-priced prostitution ring. Spitzer has not denied those allegations.

A somber Spitzer, flanked by his wife, Silda, stepped to the podium to give up the office he assumed just 14 months ago.

"I look at my time as governor with a sense of what might have been," Spitzer said.

"The remorse I feel will always be with me," he told gathered reporters. "I cannot allow for my private failings to disrupt the people's work."

Referring to the high standards he has expected from others, "I can and will expect no less of myself," he said.

The governor's resignation will have an effective date of Monday, March 17, one week after the case first became public knowledge. Lt. Gov. David Paterson, 53, now becomes New York's first black governor. Paterson, who is legally blind, will serve out Spitzer's term, which ends on Dec. 31, 2010.

Spitzer has not been charged with a crime.

In response to media speculation that Spitzer may have been bargaining with prosecutors in the case, Michael J. Garcia, U.S. attorney for the Southern District of New York, said: "There is no agreement between this office and Governor Eliot Spitzer, relating to his resignation or any other matter."

Michele Hirshman, Spitzer's former deputy attorney general and now a member of a high-powered New York law firm, has been retained to represent the governor.

Speaking an hour before Spitzer's announcement, New York Senate Majority Leader Joseph Bruno said the governor "must deal with his own problems in his own way."

"But it is time for us, and all New Yorkers, to move forward," Bruno said.

Since acknowledging in a brief statement on Monday that he had acted "in a way that violates my obligations to my family," the first-term Democrat and his family had remained secluded in their apartment on Manhattan's 5th Avenue.

In his long tenure (1999-2006) as New York's attorney general, Spitzer honed a reputation as a hard-charging prosecutor who brooked no compromises when it came to enforcing the law. Along the way, he collected a number of influential enemies, particularly on Wall Street, where Spitzer aggressive prosecuted financial misdeeds.

Spitzer said he is "deeply sorry" that he didn't live up to what was expected of him. He said he "sincerely" apologizes to every New Yorker.

Republicans on Tuesday threatened to impeach Spitzer if he didn't resign. Polls taken immediately after the revelation show that 70 percent of New Yorkers wanted him out of office.

The scandal erupted Monday, when allegations surfaced that Spitzer, 48, who is married with three teenage daughters, was the person investigators identified as "Client 9" — a customer of a call girl named Kristen. The two allegedly met at a swanky Washington hotel on the night before Valentine's Day.

Officials say Spitzer spent up to $80,000 with the prostitution ring Emperors Club VIP.

The investigation was triggered when banks noticed frequent cash transfers from several accounts and filed suspicious-activity reports with the Internal Revenue Service, a law enforcement official told the Associated Press. The accounts were traced back to Spitzer, prompting public corruption investigators to open an inquiry.

Spitzer was then allegedly caught on a federal wiretap. He could now face several charges, which include structuring — shuffling money around between accounts and entities in an attempt to mask a transaction — and transporting prostitutes across state lines.

In an AP telephone poll, 49 percent of New Yorkers said that even if Spitzer resigns, he should face criminal charges. The survey, conducted Tuesday, contacted 624 registered voters; it had a margin of error of plus or minus 4 percentage points.

Transcript of the statement Spitzer delivered Wednesday announcing his resignation:

In the past few days I've begun to atone for my private failings with my wife, Silda, my children and my entire family. The remorse I feel will always be with me. Words cannot describe how grateful I am for the love and compassion they have shown me.

From those to whom much is given, much is expected. I have been given much — the love of my family, the faith and trust of the people of New York, and the chance to lead this state. I am deeply sorry I did not live up to what was expected of me.

To every New Yorker, and to all those who believed in what I tried to stand for, I sincerely apologize. I look at my time as governor with a sense of what might have been, but I also know that as a public servant, I and the remarkable people with whom I worked have accomplished a great deal.

There is much more to be done and I cannot allow my private failings to disrupt the people's work. Over the course of my public life I have insisted, I believe correctly, that people, regardless of their position or power, take responsibility for their conduct.

I can and will ask no less of myself. For this reason I am resigning from the office of governor, and at Lt. Gov. David Paterson's request, the resignation will be effective on Monday, March 17, a date that he believes will permit an orderly transition.

I go forward with the belief, as others have said, that as human beings our greatest glory consists not in never falling but in rising every time we fall.

As I leave public life, I will first do what I need to do to help and heal myself and my family, then I will try once again, outside of politics, to serve the common good and to move toward the ideals and solutions which I believe can build a future of hope and opportunity for us and for our children.

I hope all of New York will join my prayers for my friend, David Paterson, as he embarks on his new mission and I thank the public once again for the privilege of service. Thank you very much.

from NPR reports and the Associated Press.