Accessibility links
Is 'First Lady' a Foreign Policy Credential? Democratic presidential candidate Hillary Clinton talks a lot about the importance of her experience as first lady. She says it's an important foreign policy credential, but her opponent Barack Obama takes issue with that. 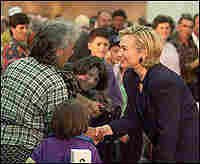 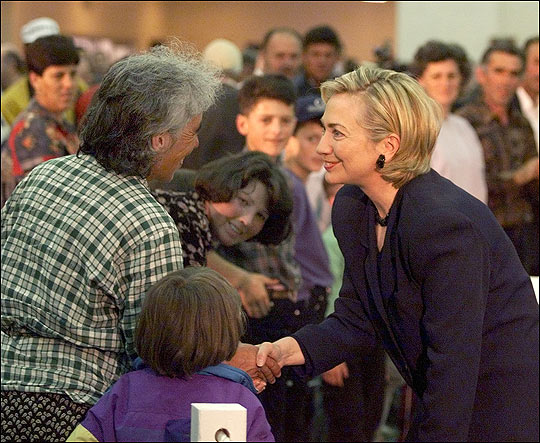 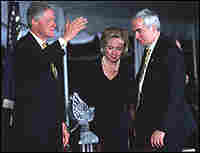 President Bill Clinton, Hillary Clinton and Brian O'Dwyer view the Paul O'Dwyer Peace and Justice Award after the president was awarded it in 1998 for his efforts to bring peace to Northern Ireland. Charlie Archambault/Getty Images hide caption 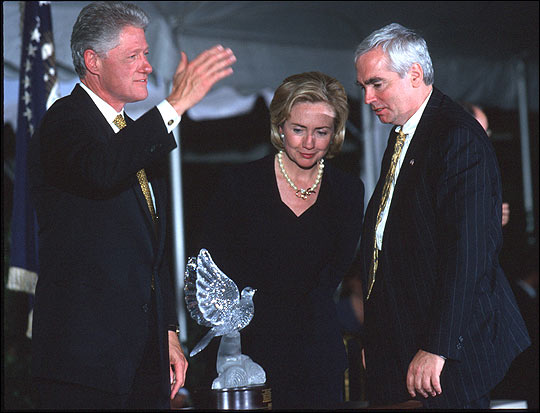 President Bill Clinton, Hillary Clinton and Brian O'Dwyer view the Paul O'Dwyer Peace and Justice Award after the president was awarded it in 1998 for his efforts to bring peace to Northern Ireland.

On the presidential campaign trail, the Democratic candidates have been going back-and-forth over what New York Sen. Hillary Clinton accomplished as a first lady and whether she gained valuable foreign policy experience that makes her ready to be president.

Clinton told NPR that she has played a major role in foreign policy decisions.

"I represented our government and our country in more than 80 countries, and I know that people are nitpicking and that's fair – it's in a campaign. But compare my experience, even after the nitpicking, with Sen. [Barack] Obama's. I mean, let's look at this objectively here, and I think my experience is much more preparatory for the job that awaits," she said.

Clinton has been highlighting key moments from her tenure as first lady. They include a 1995 speech in Beijing in which she declared that women's rights are inseparable from human rights, a 1999 visit to Macedonia where she discussed the plight of Kosovar refugees and her involvement in her husband's efforts to bring peace to Northern Ireland.

A closer look at these events makes clear that Clinton was not involved in tough negotiations, nor grappling with major crises. But she did help empower women around the world. And when Clinton spoke in Beijing, or met with leaders in countries such as Macedonia, her words carried weight and her visits carried important symbolism.

One present-day conundrum for Clinton, of course, is that even as she highlights her Beijing speech – saying her words represented a stand for women and a challenge to the Chinese government – she has been diminishing her opponent, Obama, by suggesting that words and speeches alone don't matter.

Dealing with Refugees in Macedonia

In 1999, for example, she went to Macedonia as the NATO bombing campaign was under way and hitting Yugoslav targets in Kosovo. Refugees streamed across the border by train. Clinton stopped at a refugee camp to speak to aid workers.

She later talked about this experience, comparing what she saw to scenes from Holocaust movies such as Schindler's List and Sophie's Choice.

"Think about what that means, to be driving people from their homes, separating families, loading them into trains, at the end of this violent century that we should have learned something from," she said.

Clinton's campaign says Macedonia had an inconsistent policy toward refugees before the she arrived as first lady. Macedonia's ambassador to the U.S. at the time, Ljubica Acevska, disagrees, saying her government always had a policy to allow in refugees.

She says Clinton did deliver an important message that the U.S. would help Macedonia, but the ambassador characterized the message as a supporting one.

"I would have to characterize that visit as more of a visit where she was there to say that, 'We support you. We will continue to provide the support, but all the borders should be open and all the refugees should be able to come in,'" Acevska said.

Clinton visited Macedonia at a time when many members of Congress and officials from across Europe were arriving to pressure the government to accept refugees. Some news organizations, including NPR, covered the first lady's trip. But her visit to Macedonia may be making more headlines today during the presidential campaign than it did at the time.

Dejan Anastevic is a journalist for Time magazine in Belgrade, who was covering the region in 1999. He says Clinton's visit was not unusual.

"It was a war time with a lot of stuff going on and an endless stream of chiefs-of-state," he said.

Clinton has also highlighted the time she spent as first lady, as she puts it, helping bring peace to Northern Ireland. Her husband received much credit for helping to end the troubles there.

"[Hillary Clinton] visited a fish and chips shop in South Belfast and met with working-class women who were trying to build bridges across the sectarian barriers that divide Protestant and Catholic barriers within Belfast."

But, he ultimately described the event as an "artificial occasion" that was "brought in to capture the moment." Although it was well-received by the public, the event's highlight was the first lady sitting down with women, he said.

Brice Morrison, a Connecticut congressman who worked for years for peace in Northern Ireland and who was a law school classmate of the Clintons, says the first lady's efforts were more than well-received. Much of Hillary Clinton's work, he said, was behind-the-scenes, meeting women in grassroots community groups, where support for a peace agreement was essential.

Clinton Compared to Other First Ladies

Being a high-profile resource for women around the world has been a priority of other American first ladies, according to Myra Gutin, a scholar and historian at Rider University in New Jersey. Gutin has written a book called The President's Partner: The First Lady in the Twentieth Century.

Gutin says that meeting with women around the world is par for the course for first ladies, but she says Clinton did set herself apart in some key ways: by crafting health care legislation and by traveling to more than 80 countries, which showed a greater commitment to making a diplomatic connection.

But, she says, there are limits to what even the most active first lady can do.

"The first lady is not the commander-in-chief. The president is," Gutin said. "She is next to the power rather than wielding power."

Proximity to power means a first lady is not dealing with the biggest crises. Lissa Muscatine was Hillary Clinton's speechwriter in the 1990s and acknowledges the first lady was never confronted with a military decision or terrorist attack. But a first lady, Muscatine said, can be tough.

She pointed to when Clinton landed in Beijing in 1995 and challenged the Chinese government during a United Nations Conference on Women.

"No one should be forced to remain silent for fear of religious or political persecution, arrest, abuse or torture. I believe that now, on the eve of a new millennium, it is time to break the silence. It is time for us to say, here in Beijing, and for the world to hear, that it is no longer acceptable to discuss women's rights as separate from human rights," Clinton said.

Muscatine wrote that speech, and she says it galvanized attention for women around the globe.

"I can tell you from going around the world with her that for years after that everywhere we went, people — women — would run up to her with copies of the speech, clutching it," Muscatine said. "It was as if it empowered a lot of women and gave voice to their aspirations."