Accessibility links
Bill Gates Targets Visa Rules for Tech Workers Microsoft's Bill Gates testifies before Congress about the need to make it easier to hire foreign-born workers. He says the U.S. is losing its position as the global innovation leader due to limits on H1-B visas for these employees. 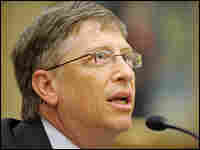 Microsoft co-founder Bill Gates testifies before the House Science and Technology Committee during a hearing on competitiveness and innovation in Washington, D.C., on Wednesday. Tim Sloan/AFP/Getty Images hide caption

Bill Gates says the United States' position as the global leader in innovation is at risk.

The Microsoft chairman says there is a deficit of Americans with computer-science degrees, and he wants the government to make it easier for Microsoft to hire foreign-born workers.

Gates testified before the House Committee on Science Technology on Wednesday about what he sees as a need to liberalize rules for H1-B visas for skilled foreign workers.

Currently, Congress has set an annual limit on H1-Bs at 65,000, with an additional 20,000 earmarked for foreign students with advanced degrees from U.S. universities.

The quota for H1-B visas filled up immediately last April — leaving June graduates stuck with no recourse but to find work in other countries.

Critics say H1-B workers take jobs away from Americans and that tech companies would find Americans to take these jobs if the salaries were higher.

Microsoft recently opened an office in Vancouver, Canada — where it can station high-skilled workers who can't legally work in the U.S.

There, Gates tells Robert Siegel, the government welcomes "not only those people for these high-paying jobs, but the four or five jobs we create around each of those engineers."

Gates says that the good news is that Microsoft is hiring people in the United States at a rapid rate, which allows the company to do more research and increase employment.

"The thing that limits us is hiring the world's best engineers," he says, noting that 60 percent of the students at the top U.S. computer-science departments are foreign-born.

"Traditionally, most of them stay in the country and jobs are created around them. Now that we've hit these quotas, they have to go somewhere else," Gates says.

In response to critics, Gates says the issue isn't about raising wages.

"These are very, very high-paying jobs," he says, noting that the average salary, including benefits, is worth more than $100,000 annually, regardless of where the employee is based.

The Programmers Guild, a professional society, also criticizes Gates for facilitating the erosion of U.S. competitiveness by using the H1-B program to "train a critical mass of foreign workers within the U.S." and then using "these workers to establish overseas operations."

But Gates counters that the people who work in the United States on H1-B visas "overwhelmingly want to stay in the country."

These top engineering students will be hired, Gates says.

"The only question we can deal with is do we allow them to stay here and work," he says. "Traditionally, the U.S. — because it's so attractive — has had this huge advantage that other countries bemoan. ... Now, they celebrate the fact that we're kicking them out after giving them the world's best education."