Accessibility links
Microsoft Worker in Beijing: Focus Is Collaboration Tieyan Liu of Microsoft Research Asia in Beijing says that as a researcher, he isn't focused on the competition, but rather on his own projects — and on how best to collaborate with his colleagues in the U.S. He reflects on what his facility has meant for Chinese-educated researchers and for the country's universities. 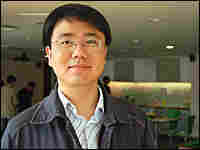 One place where Microsoft has opened a research lab is China. Microsoft Research Asia, known as MSRA, was established in Beijing 10 years ago. Today, it houses about 360 researchers.

Tieyan Liu, 32, has been with Microsoft for five years. His research at Microsoft involves Web searches. Currently, he's using algorithms to figure out how best to rank results.

He says he's aware of the importance of the work he is doing, given the strength of Microsoft rivals like Google and Yahoo.

But he insists that as a researcher, he's not focused on the competition, but rather on his own research projects — and on how best to collaborate with his colleagues in the U.S., whether by telephone, video conference, or in face-to-face meetings.

The distance between the Beijing site and the company's Redmond, Wash., headquarters is a problem, he says, but they try to minimize the negative effects of it. He travels to Redmond about once a month, he says.

Liu talks about those challenges that working in China presents, and reflects on what his facility has meant for Chinese-educated researchers like him, and for the country's universities.