Accessibility links
In 'Horton' Movie, Abortion Foes Hear an Ally The premiere of Horton Hears a Who drew a Hollywood crowd and a few others. Horton the elephant says "a person's a person, no matter how small." Anti-abortion activists endorse the sentiment — loudly. 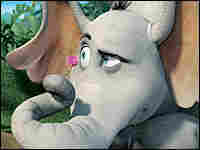 The premiere of Dr. Seuss' Horton Hears a Who drew fans of the book — along with noisy protesters. Blue Sky Studios/Twentieth Century Fox hide caption 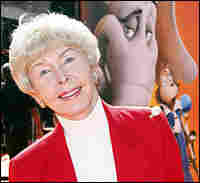 Audrey Geisel is the widow of Theodor Geisel, better known as Dr. Seuss. She says neither she nor her late husband wanted Dr. Seuss characters to be used for political purposes. Kevin Winter/Getty Images hide caption

"I meant what I said and I said what I meant. And an elephant's faithful, 100 percent."

That's one of Horton the elephant's best-known mottoes. But with a movie version of Dr. Seuss' much-loved children's book opening Friday, another Horton saying has drawn attention from activists who see a message in the movie — a message that suits their purpose.

That message: "A person's a person, no matter how small."

Of course they're not involved in the same conversation, precisely. In Horton Hears a Who, Horton discovers that there's a whole town (Whoville) full of tiny people (the Whos) on a tiny speck of dust that's come floating his way. His neighbors think he's lost his mind. But Horton decides it's his calling to protect the life on the speck: "A person's a person no matter how small," he insists.

When Jim Carrey, the film's Horton, said those words during the Los Angeles premiere of the film last week, demonstrators who'd slipped into the theater started to yell. It was a surprise, to say the least, for the premiere audience.

"I thought maybe there was a nut loose in the theater or something," says Karl ZoBell.

ZoBell, an attorney, has represented the interests of Dr. Seuss, or Theodor Geisel, for some 40 years. After the show, ZoBell saw the demonstrators handing out anti-abortion flyers designed to resemble movie tickets. Geisel's widow, Audrey Geisel, was there — and ZoBell says none of this sat well with her.

"She doesn't like people to hijack Dr. Seuss characters or material to front their own points of view," ZoBell said.

Some anti-abortion Web sites say Audrey Geisel supports Planned Parenthood. ZoBell says he's never discussed such matters with her or her late husband, and that the Geisels never wanted Dr. Seuss characters used to advance any political purpose. But it happens more often than you might think.

"People running for office like to refer to their opponent as the Grinch, because it's kind of a simple-minded way to say, 'My opponent is a mean, bad person,'" ZoBell says.

Kristi Burton, who represents a Colorado organization working on a ballot initiative stating that life begins at conception, says her group wasn't at the Horton premiere, though members are planning to show up at Denver theaters when the movie opens — not in protest, but in support of what they see as its message. That may not have pleased Dr. Seuss, but Burton says the group has been careful not to go too far in using his material.

"Regardless of anyone's particular position, the statement 'A person is a person no matter how small' certainly affirms our amendments in defining a person from the very beginning stages," she says.

The group has no plans to disrupt the movie, Burton says. Members will simply wear T-shirts bearing that Horton motto, while trying to gather signatures for their petition.

'Horton Hears a Who' Web Site