Accessibility links
Cheb i Sabbah's 'Devotion' to Organic Electronica The Algerian club DJ is best known for melding traditional ethnic sounds with electronica. But on his new album, his mix of highbrow Indian spirituality and dance-floor ambition stands apart from the growing morass of globalized techno wizardry. 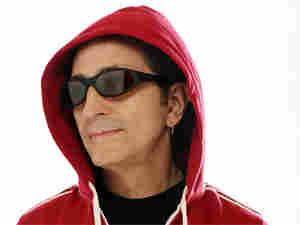 In the '60s Cheb i Sabbah moved from his native Algeria to Paris, where he became a successful club DJ. These days, Sabbah is better known for producing albums that blend traditional ethnic sounds with electronica. His seventh release, Devotion, is just out, and it draws on religious music from the Indian subcontinent.

Club-friendly remixes of world music are a dime a dozen these days. At their worst, they can reduce any cultural expression to a rubble of beats and bleeps. So it's important to understand from the start that Sabbah is not remixing or sampling anything. For all their high-tech sheen, the eight tracks on Devotion are organic recordings, made with the full cooperation of flesh-and-blood musicians, including some of the most respected devotional singers in contemporary India.

For example, there's the liquid-gold voice of Shubha Mudgal, an iconic singer of Indian classical music. On the song "Morey Pya Bassey," she interprets a bhajan, a vocal piece from Hindu ritual. Sabbah has found that high-culture figures like Mudgal actually yearn to reach out to popular audiences. But they worry about having their art cheapened by Bollywood commercialism, or worse. Working with Sabbah, they can embrace modernity, but keep their dignity intact.

The music on Devotionseeks to universalize expressions of Hindu, Sufi and Sikh spirituality. Sabbah never resorts to slamming disco beats or tacky club music gimmicks as he attempts to bridge the ecstasy of South Asian religious practice with the ecstasy of a rave. It's this combination of highbrow spirituality with dance floor ambition that sets Sabbah's work apart from the growing morass of globalized techno wizardry.