Accessibility links
A Delightful, Awful Marriage to a Pet Parrot Perhaps you've seen a colorful, talking bird in a pet shop and thought, "I've always wanted a parrot!" Before you take the plunge, commentator Julie Zickefoose sounds a note of caution.

Listen
A Delightful, Awful Marriage to a Pet Parrot 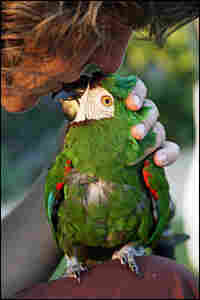 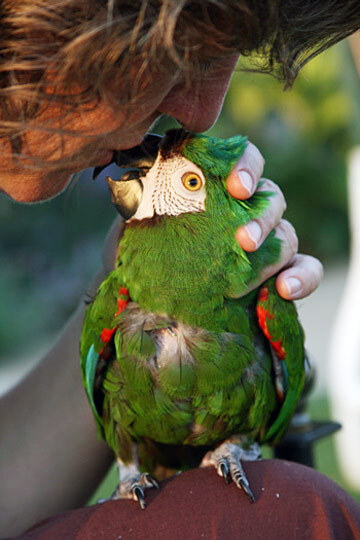 Commentator Julie Zickefoose gets some love from Charlie, a 21-year-old chestnut-fronted macaw. 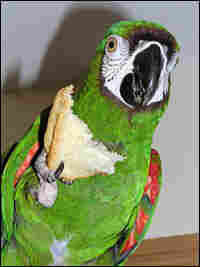 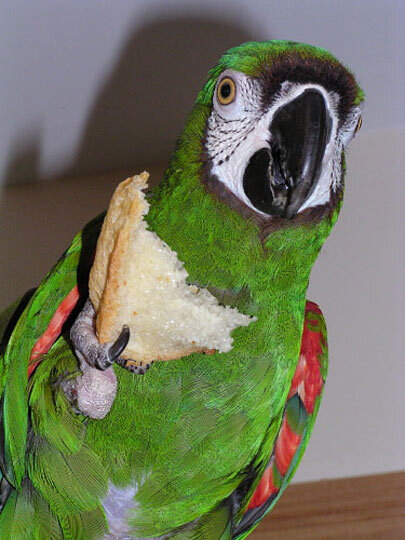 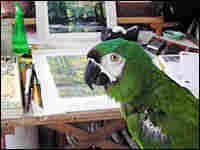 Charlie supervises at the drawing board. Julie Zickefoose hide caption 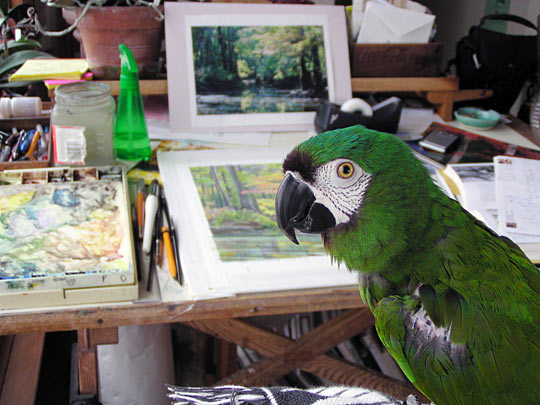 Charlie supervises at the drawing board.

Perhaps you've seen a colorful, talking bird in a pet shop and thought, "I've always wanted a parrot!" Before you take the plunge, here's a note of caution.

As I write, the emerald-green head of a macaw emerges from under my desk. He has crawled up my leg from a favorite perch on my foot. He's been doing this for 21 years, and I expect him to be sitting on me, giving creaky calls and showering me with feather dandruff, for at least the next 21. He's the relationship I can't get out of.

I bought this parrot in 1986, the first time my biological clock rang. I needed something young and helpless to care for, but living hand-to-mouth as a field biologist, a baby wasn't in the cards. It was one of the moments in my life when a crystal ball might have been helpful; to look forward 21 years and see myself still fixing a hot breakfast every morning for a bird; to see that sweet cooing baby parrot morph into a crotchety tyrant, not averse to sinking his powerful beak into flesh to make a point.

And yet, Charlie speaks a few words; he has a flair for slapstick. In the company of people, he listens to the conversation and laughs loudly at precisely the right moment. He waddles around the house, toenails clicking on linoleum, looking for a nice closet where he can hole up. On cold days, he dives down the front of my sweater and rides like a joey in its mother's pouch, muttering and cackling in the friendly warmth. The bare skin on his cheeks is soft and warm. He likes to be hugged.

A captive parrot selects the only mate it can find (in this case, Charlie's picked me), but I just refuse to follow the plan he's laid out for me. I share my affections with another of my species, even when Charles punctures my skin to prevent this perceived infidelity. I won't eat the breakfast he regurgitates for me, no matter how tenderly proffered. Occasional furtive copulations with my sock-clad foot net him nothing but a temporary release. He points out and protects his chosen nest site, a grotto under the sink, with cracked squawks and sudden rushes at passersby. But I can't succumb to his will, crawl under the sink and lay the two round white eggs that Charlie believes I must have in me; that he so longs to incubate and protect. He crouches in the half-darkness, looking up at me with a Don King wig of feathers over crazed golden eyes. Come on in, baby. You know you're ovulating.

Every once in awhile, I look down on myself, a middle-aged woman with a middle-aged parrot dropping dandruff and worse on her shoulder. Sometimes, after he has perforated my finger or lip in a fit of pique, it occurs to me that I might just surrender Charles to a parrot rescue group. Just as quickly, I discard the idea, since people are constantly calling me to rescue their birds. Who am I to dump this slightly mad bundle of idiosyncrasies and multicolored feathers onto anyone else? We have a history together, forged in stone on that fateful December day in 1986 when I gathered a baby macaw in my arms and said "I do."

Parrots can be delightful. But they are raunchy, awful pets. I'll probably be an old, old lady before I figure out what has kept me and Charlie together all these years. And I'm sure Charlie, that tatty old rotter, will be sitting on my shoulder when I do. Maybe it's love. But it feels a little more like marriage.

Commentator Julie Zickefoose loves birds of all species, but the intelligence and sociability of parrots makes them rank among her favorites. She is the author of Letters from Eden.