Accessibility links
Catwoman: Feminine Power, on the Prowl With a shadowy past and a dark allure, Catwoman has been a compelling figure, for women and men alike. But she's anything but static. Her character, like her costume, has changed over time, from conflicted villain to damaged but empowered antihero. 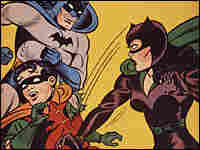 The Catwoman of this early Detective Comics, "The Black Cat Crimes!" is clearly a nemesis of Batman and the Boy Wonder. Courtesy DC Comics hide caption 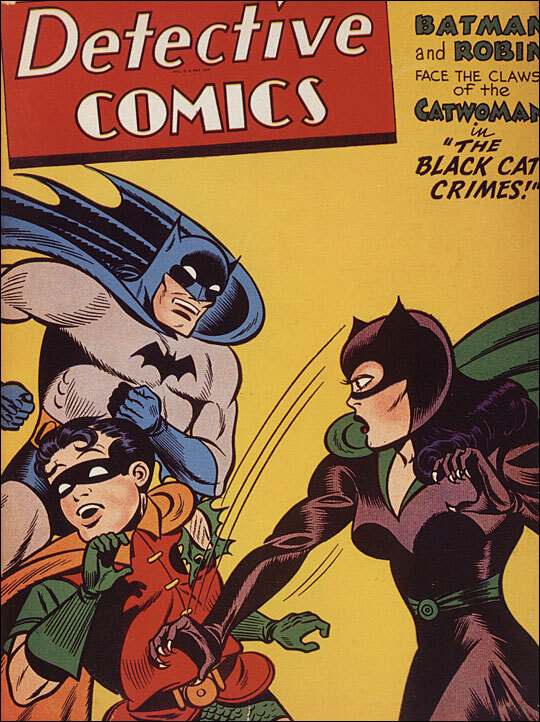 The Catwoman of this early Detective Comics, "The Black Cat Crimes!" is clearly a nemesis of Batman and the Boy Wonder. 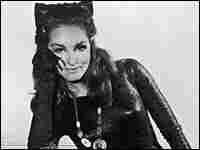 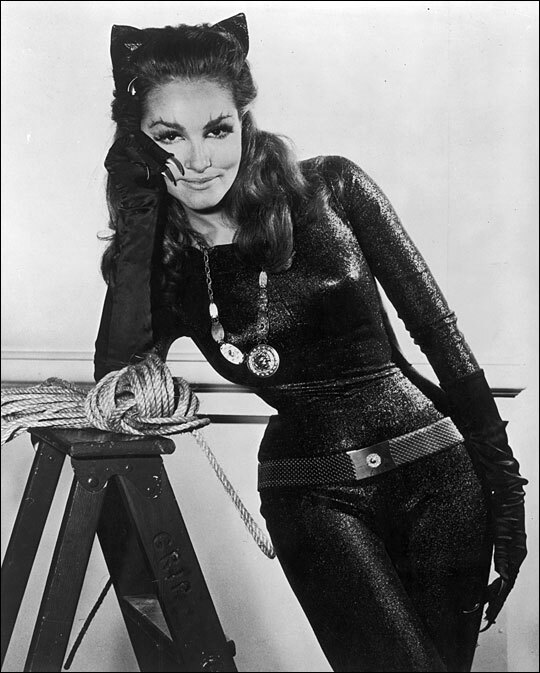 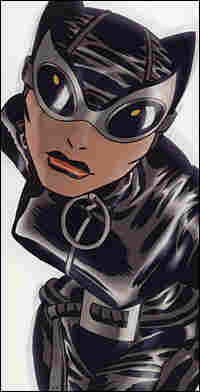 In the new millennium, Catwoman has a new look with new toys, including boots in place of heels. DC Comics hide caption

What Makes Her So Attractive? Weigh In: The 'In Character' Blog

Whether you were reading comic books in 1940 or you read them today, chances are the "Princess of Plunder," better known as Catwoman, has crossed your path.

Initially she was an archvillain, introduced in Batman No. 1 as a foil for Gotham City's Dark Knight. But there's always been a clear attraction between the two, even though a romance between a criminal and crime fighter might seem to be fraught with folly.

Catwoman ranks No. 51 on the 100 Greatest Villains of All Time list from Wizard Magazine. And no wonder: Her hisses — and purrs — have made her a symbol of feminine power.

The first glimpse many people got of Catwoman was watching her slink onto the set of the campy 1960s TV series Batman.

Jaws around the country dropped as the 6-foot Julie Newmar oozed onto the screen. Shimmering in a black Lurex cat suit, complete with cat ears and a low-slung golden belt, this villain definitely had a feline's fascination with shiny objects. But the crime-fighting duo Batman and Robin made her arch her back — and not in a good way.

Catwoman, says Julie Newmar, is comprised of the "most delicious" human traits. Newmar even made a list: determined, calculating, wise. She says men tell her she was their first crush. Women tell Newmar they love the character because she's gorgeous and smart.

"You feel more power," says Newmar. "You're both hidden and exposed at the same time. You're hidden by the black; you're exposed by the tightness of the outfit. You have on these high heels, long nails, and then your eyelashes — your hair!"

Kitt says she didn't think of her Catwoman as a superhero, but she did see her as powerful — even autobiographical.

"I didn't have to think about how Catwoman would be," she says. "I just did myself!"

Adam West played Batman (and Bruce Wayne, of course) on the TV series. He says that though Catwoman was a confusing bad girl, she was never boring. And Batman — his Batman, at least — really had feelings for her.

"She was sexy and attractive," he says. "But she certainly had her own agenda, even if it wasn't very honest."

DC Comics veteran Jerry Robinson, now 86, helped define the character of Catwoman alongside Batman's creator, Bob Kane. Catwoman's real name is Selina Kyle. Robinson says he visualized her as a master criminal, along the lines of the character Michelle Pfeiffer developed for the Batman movie series.

"She was agile and she was athletic," Robinson says. "She was a highly proficient burglar, but she was not a heroine. She was one of the protagonists."

But Catwoman has changed with the times. Will Pfeifer (no relation to Michelle) writes the current Catwoman comic. He says her backstory is as tangled as a ball of string: She was orphaned, has a sister, and has a shadowy past as a prostitute.

"I like to play off that," says Will Pfeifer. "To me, she's just someone who's had a really rough life, but she's never been beaten. She really comes out on top, and she uses her experiences and moves on from them — and she has fun while she's doing it, I think.

Indeed, Catwoman isn't the type to sit around twiddling her claws, waiting for anyone to bail her out of trouble — even when the offer comes from Bruce Wayne.

"This was one of the first female characters we saw on television that really spoke to empowerment," says Suzanne Colon, author of Catwoman: The Life and Times of a Feline Fatale. "Not only empowerment; a proto-feminism that was very sexy and pretty and female, and yet very take-charge. This woman had her own gang of men who wore little cat ears ... to please her."

Colon says women have a such a visceral reaction to Catwoman because, though she's a little nuts, she's her own woman.

A few other things have changed since Catwoman first yowled, back in 1940. She's had her own comic for 15 years now. And sure, she still wears the suit, but it's more functional now. She still has the whip, but no more high heels that could slip off of a rooftop. Selina's had some martial arts training. And she has a daughter.

Catwoman sees herself now as a guardian of the poor and disadvantaged, though that doesn't stop her from committing a little larceny every now and then. Bottom line: Catwoman wants what she wants, and drat the consequences.

Colon says Catwoman gives us a sense of what we might be able to do — even if it's not necessarily a good idea to unleash all that in our daily lives.