Accessibility links
Despite New Highways, Afghans Drive at Own Risk There are more than 1,500 miles of new or paved roads in Afghanistan, but a growing number of Afghans say traveling those roads is fraught with danger from the Taliban — and even the police themselves.

Listen
Despite New Highways, Afghans Drive at Own Risk 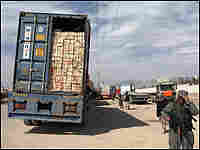 A line of trucks in front of the Kandahar customs office prepares to leave. Truck drivers leave their back doors open so the Taliban can see they are not transporting goods for the NATO-led coalition. Soraya Sarhaddi Nelson hide caption 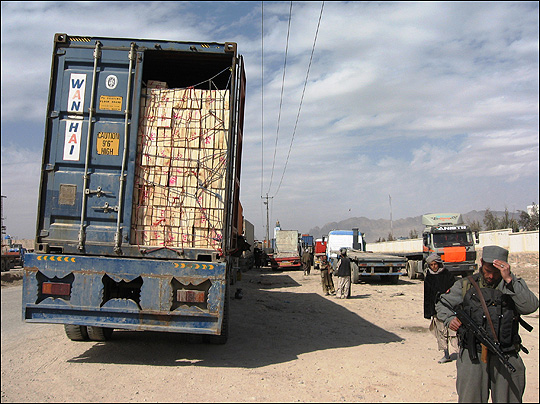 A line of trucks in front of the Kandahar customs office prepares to leave. Truck drivers leave their back doors open so the Taliban can see they are not transporting goods for the NATO-led coalition. 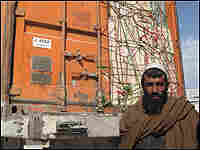 Abdul Hadi, 32, from Wardak province, leaves the back door of his truck open as he transports oranges so the Taliban don't shoot at him with rocket-propelled grenades. Soraya Sarhaddi Nelson hide caption 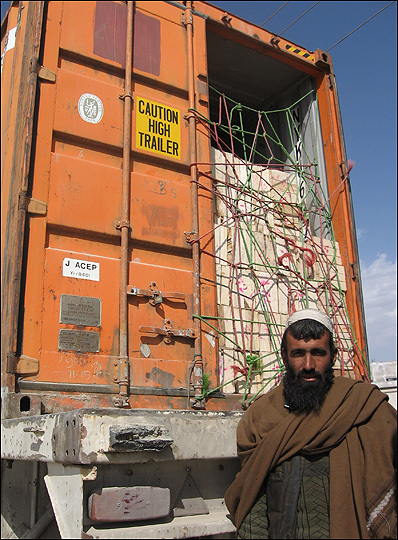 Abdul Hadi, 32, from Wardak province, leaves the back door of his truck open as he transports oranges so the Taliban don't shoot at him with rocket-propelled grenades.

From the air, Afghanistan's "Ring Road" — a vast beltway that links the country's provinces — looks like a U.S. freeway.

But on the ground, Afghan drivers say the road, and other highways like it, are more like the Wild West.

Foreign and Afghan companies have built or paved more than 1,500 miles of roads in the past five years, but a growing number of Afghans say traveling these roads is hazardous. Motorists are threatened by the Taliban and roadside bombs. They're also prey for police officers collecting illegal tolls and for bandits seeking hostages.

At the central taxi and bus station in the southern city of Kandahar, young drivers compete for passengers, but there are few takers. Taxi driver Abdul Wari says he'll ferry passengers to Kabul from Kandahar only during daylight hours and only if he has a full car since he feels there is safety in numbers. Wari and other Afghans say the quality of the Afghan road network has improved — especially in the south, east and west, where newly paved roads abound. But motorists use the roads at their own risk.

Mohammad Ehsan, deputy chairman of Kandahar's provincial council, says he could drive from Kandahar to Kabul in less than five hours — about a quarter of the time it used to take. But he doesn't take the chance.

"I don't dare to drive because the security is so bad. As a politician, I'm a target. So I only fly," Ehsan says.

For Afghans whose livelihoods depend on transportation, the perilous roads can present tough choices. Trucking company manager Abdul Ghader says he has no choice but to send his drivers out on the roads despite the sometimes weekly hijackings of his convoys.

On a recent morning, the somber-looking manager in a flashy beige and silver turban tried to secure the release of two of his drivers and three trucks filled with construction supplies. They were hijacked a couple of hours after they left the western city of Herat.

Ghader says the kidnappers demanded the equivalent of $36,000, money he says the owner will likely pay since it would cost more to replace the trucks.

Ghader says the police who staff checkpoints along the roads refuse to help the lost convoys. He and other Afghans have asked Afghan and western soldiers to maintain law and order on the roads. U.S. Gen. Dan McNeill says every truck driver may want a coalition escort, but it can't be done.

"That's not my job. I'll do my best and I have escorted some convoys, but I don't have the force to spend everyday on that Ring Road," McNeill says. "If somebody thinks that's the answer, then give us more force."

Rather than escort every convoy, U.S. and NATO forces have been stepping up efforts to revamp the Afghan police. They've started intensive training to improve their policing skills and teach them ethics.

At a local level, Kandahar Gov. Asadullah Khalid has taken more drastic measures to stop the shakedowns. Last month, he fired some 200 police officers in a volatile district at the eastern edge of his province after complaints from drivers about the unauthorized "tax" police were forcing them to pay.

But progress is slow and the illegal tolls continue in many other areas. Some truckers have learned to drive with one of their back doors open to allow Taliban fighters to see that they're are not carrying goods for the Western coalition or government. Otherwise, they run the risk of being shot with rocket propelled-grenades or blown up by remote-controlled bombs.

In front of the customs house at the edge of Kandahar, one truck driver says he and his colleagues count on paying $120 to crooked cops each time they make a run between Kandahar and Kabul — twice as much as he earns per run. But to many Afghan employers, it's simply the cost of doing business.