Accessibility links
Audience is Loser in Haneke's Unfunny 'Games' In Michael Haneke's new film, a wealthy American family opens the door of their secluded vacation home to two strangers — who proceed to torture them in a series of sadistic games. David Edelstein has a review. 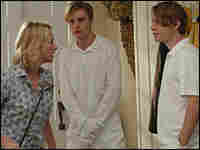 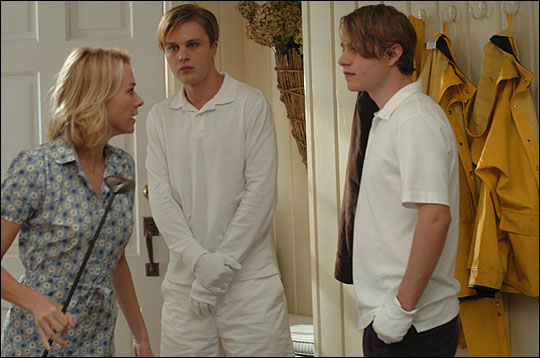 'Who Are You Betting On?'

Two years ago, I was the butt of Michael Haneke's sick joke. The folks at Kino Video sent me a package of the German director's pre-Cache features, among them Funny Games, which Haneke has now remade with Naomi Watts and Tim Roth.

The original was the tale of a well-to-do Austrian family — a mom, a dad, a little son — whose vacation home is invaded by two courteous young men in white preppy duds who, for no apparent reason, go on to torture them. I watched to the end, removed the DVD and snapped it over my knee. It hit me later that my response would have delighted Haneke. Here was proof: He had succeeded in shocking the bourgeoisie.

I can't say whether the American Funny Games is a frame-by-frame remake of the original — because, after all, I broke the DVD. But the changes are minimal. Here are the same elegant tableaux, the same impassive camera, the same creepy-crawly flatness. Michael Pitt and Brady Corbet now play Paul and Peter, who move from gated compound to gated compound, introducing themselves with a polite request on behalf of a neighbor for eggs, dropping them "by accident" and asking for more.

Naomi Watts produced this remake, apparently concluding she hadn't yet been sufficiently violated on screen. King Kong, after all, turned out to be softie; now she's hopped into the hairy paw of a giant-ape artiste.

And this ape has postmodern pretensions, so Paul occasionally turns to the camera and winks at the audience. The campiness, surprisingly, doesn't take the edge off what we're watching: The suffering of the mother, father and child is hideously realistic, and our thoughts turn not to the picture's artifice but to the line of cinematic killers in the last few decades who videotape their atrocities.

One is the title character in Haneke's early Benny's Video, a media-deadened 12-year-old who repeatedly watches a tape of a pig being slaughtered, then tries out the pig-killing gun on an adolescent girl in a scene that would appall even No Country for Old Men's Anton Chigurh.

Benny was played by Arno Frisch, who grew up to be one of the home invaders in the original Funny Games — and the link is significant. Benny's Video was part of what Haneke called his "glaciation trilogy," in which he indicted the people of Austria for their callousness toward the carnage in nearby Bosnia. Later, in Cache, he used a mysterious videotape as a means of punishing a Frenchman for repressing his country's crimes against Algerian immigrants. The sociopaths of Funny Games are monstrous, but the director also seems to be mocking the American family they ravage for its privileged obliviousness.

I say "seems to be" because it's difficult to grapple with serious themes when what comes through most vividly is the director's sadism. In the end, Funny Games is little more than high-toned torture porn with an edge of righteousness that's not unlike Peter and Paul's. Audiences flock to nightmarish "home invasion" thrillers because of an implicit pact with the filmmaker that the invaders will be vanquished and the family unit saved. Some could make the case that Haneke deserves a measure of respect for reminding us how pathetically dependent we are on that pact and its cathartic endings. But I won't, because the movie is shallow and itself glacially unengaged — a punkish assault without punk's redeeming passion.

There I go again, metaphorically snapping Funny Games over my knee. I bet that tickles Haneke. That's the thing about vapid provocateurs. No matter how wretched their work, they think the joke is always on us.