Accessibility links
Counting Crows: Making Hits, Looking Ahead : World Cafe In the 15 years since releasing its breakthrough debut, the roots-pop band has become one of the most popular rock groups in America. The band plays from and talks about its new album, Saturday Nights & Sunday Mornings.

When I Dream of Michelangelo

You Can't Count on Me 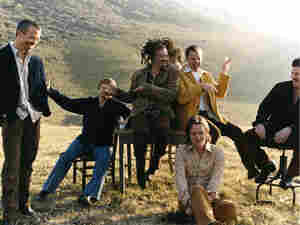 Counting Crows has been one of America's most poopular bands ever since "Mr. Jones," the hit single from its 1993 debut album. Courtesy of Counting Crows hide caption

In the 15 years since releasing its breakthrough debut album, the San Francisco band Counting Crows has become one of the most popular and easily identifiable rock groups in America. The band followed its 1993 smash August and Everything After with a string of successful follow-up albums and tours (alongside Bob Dylan, The Rolling Stones and others). Counting Crows stopped by World Cafe before performing a sold-out Live Fridays Concert at WXPN.